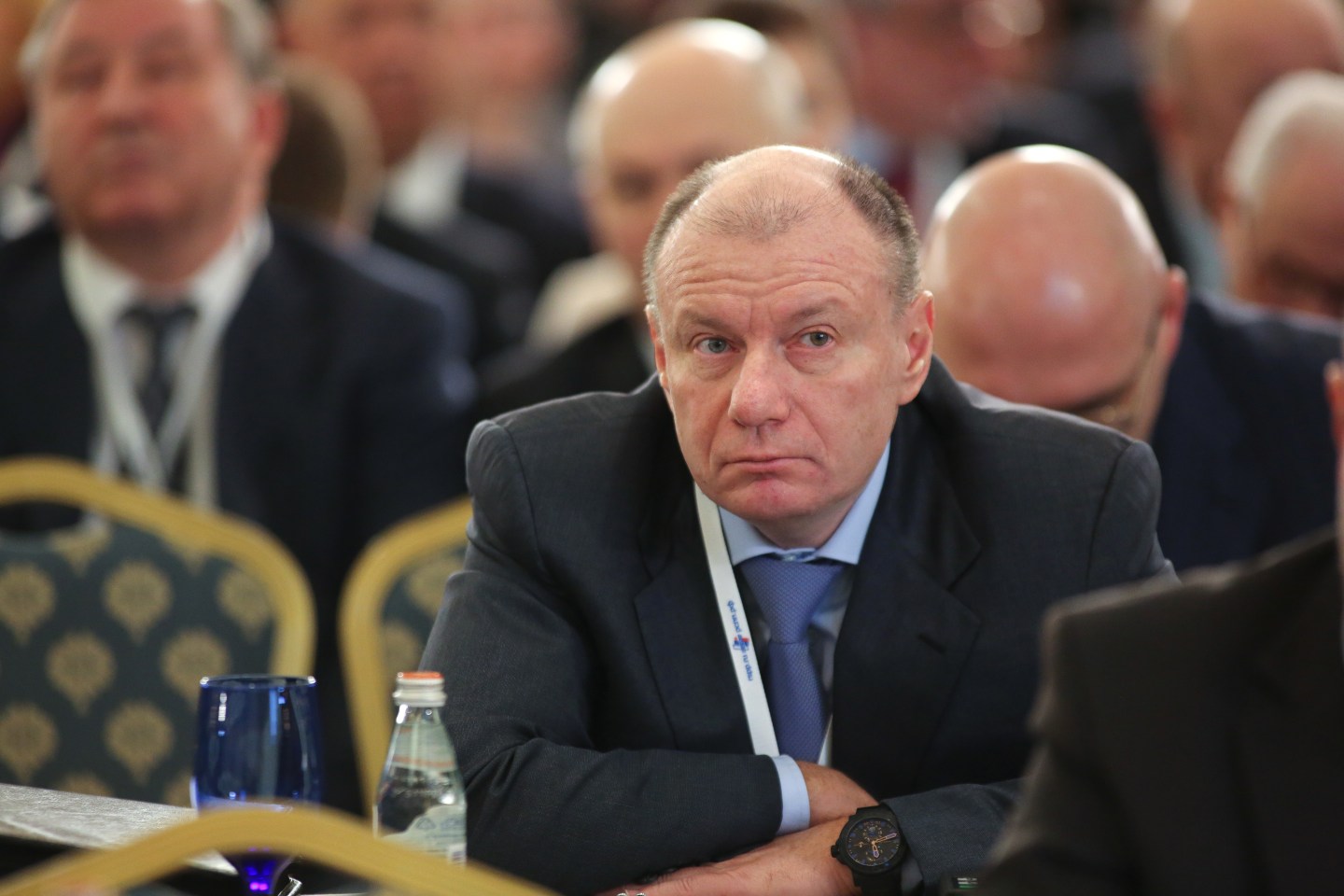 Vladimir Potanin, Russian billionaire and owner of OAO GMK Norilsk Nickel, attends a meeting of the Russian Union of Industrialists and Entrepreneurs (RSPP) during Russia Business Week in Moscow, Russia, on Thursday, March 19, 2015. The worst is over for Russia's economy after a tailspin in oil prices and sanctions over Ukraine choked off access to credit and sparked the biggest currency crisis since 1998, according to Russia's Finance Minister Anton Siluanov. Photographer: Andrey Rudakov/Bloomberg via Getty Images
Photograph by Andrey Rudakov — Bloomberg via Getty Images

There’s a divorce suit in Russia that would make Sue Ann Arnall, the ex-wife of Continental Resources’ founder Harold Hamm, positively peevish about her $1 billion pay-off.

Natalya Potanina, the ex-wife of oligarch Vladimir Potanin, has filed suit in Moscow seeking half of the two holding companies where Potanin’s estimated $15 billion fortune is concentrated.

If she succeeds, she’ll become the richest divorcee in history, ahead of fellow Russian Elena Rybolovleva, who was awarded a $4.5 billion settlement from her fertilizer baron husband Dmitry in 2010. (He’s still appealing the Geneva court’s ruling, but dry your tears, gentlemen: he still had enough loose change left over to buy the soccer club AS Monaco and a large part of the Cypriot banking sector; if he’s ever really hard-pressed, he might still be able to count on a welcome at the Manhattan apartment that his daughter’s trust fund bought for $88 million in 2012.)

Over half of Potanin’s fortune is ultimately attributable to the Norilsk Nickel mining company, the $30 billion jewel in the crown of Russia’s metals sector, in which Potanin’s Interros holding company owns a stake of 30%.

To the great amusement of business and society gossips, Potanin had managed last year to persuade a Moscow court that the only assets that he should be forced to share with his wife were $140 million in various real estate and small shareholdings. He claimed this was all he owned directly at the time that their marriage began to hit the rocks in 2007. As such, neither the shareholding in Norilsk, nor the swish skiing resort of Rosa Khutor near the Winter Olympics venue of Sochi, figured in the original case.

The newspaper Vedomosti reported Wednesday that Potanina now claims to have secured a new court ruling that says their marriage was only dissolved as of February last year.

Russia’s billionaires have often tended to hide their ownership of large companies behind multiple veils of secrecy, generally through holding companies registered in offshore havens (Natalya is targeting Cyprus-registered “Interros International Investment Limited”, according to Vedomosti). That means that, although Potanin has been the public face of Norilsk and the man casting the Interros block vote for many years, it’s impossible to say how much he actually owns directly, without knowing the detail about Interros and its affiliates.

However, Interros’ own website doesn’t shy away from simplifying the issue in its corporate history page, saying that Interros was “the property of Vladimir Potanin” in 2007, when the partners divided businesses “with a value of around $30 billion.”

Natalya Potanina’s new suit threatens to open one of the biggest can of worms in the Russian corporate world. After splitting with his partner in Interros, Prokhorov sold his stake in Norilsk Nickel to aluminum baron Oleg Deripaska, whose relations with Potanin are nowhere near as friendly.

The two have been locked in a struggle for control of the company ever since, although Deripaska has been on the defensive for most of that time after his debts caught up with him in the wake of the crisis. Potanin exercises day-to-day control from the CEO’s office. The two ultimately brought in fellow-oligarch Roman Abramovich to keep the peace between them, effectively allowing him to arbitrate on any disputes.

If Natalya Potanina can secure ownership of half of her ex-husband’s bloc, that fragile balance of power over one of Russia’s greatest cash cows will be fatally upset and Russia’s ability to settle high-stakes commercial disputes peacefully could be tested very sorely. Rybolovlev’s case was simple by comparison. He’d already sold out of his fertilizer business.

Neither Interros nor Potanina could be reached for comment Wednesday.

(CORRECTION: The original version of this article incorrectly stated that Rybolovlev had bought the apartment at 15 Central Park West himself. It also omitted to mention Rybolovlev’s appeal against the Geneva court’s ruling)