Yes, there are craft beers made with testicles, Peeps, and, um, poop 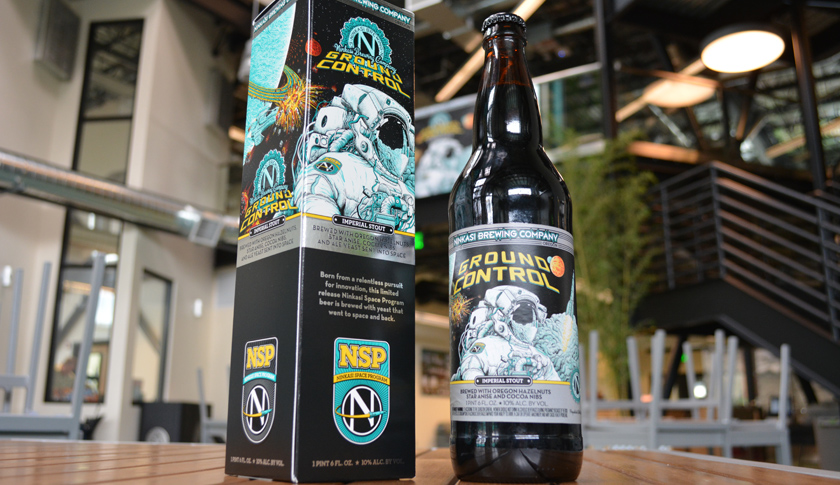 When you write about beer, it’s amazing how often your friends stop by for an impromptu visit. Usually my buddies leave pretty happy – but their most recent stopover may have them rethinking whether I’m worth the bother.

Craft brewers have a freedom to experiment that macro brewers can only dream about. It’s often a hit or miss affair, with most of the misses being chalked up as a learning experience. But when you get into the world of novelty beers – or stunt beers – it’s a whole different ball game.

Stunt beers are a way to turn heads – and sometimes capture a little mainstream attention. Dogfish Head, for example, has Chicha – a native corn beer that is chewed by the brewers and spit out before being brewed (and boiled – so it’s sterile). The saliva, say the brewers, has enzymes that convert the starches in the corns to sugar.

Earlier this month, Barrels and Bottles Brewery in Golden, CO offered an extra special bitter that was brewed with Peeps, the colored marshmallow candy that marks the Easter season. (90 of them, to be specific.) And just last week, New Belgium teamed up with Ben & Jerry’s ice cream to announce plans to produce a Salted Caramel Brownie Brown Ale (which will go on sale this fall).

These sorts of concoctions are great for grabbing headlines and starting conversations, but the problem is beers brewed solely to capture the general public’s attention are oftentimes … well, let’s be kind and say less than optimal.

The newly crowned king of stunt beers is Iceland’s Brugghús Steðja. In January, the microbrewery introduced Hvalur 2 – a 5.2% ABV seasonal ale that incorporates the testicles of fin whales into the brewing process. And, believe it or not, that’s not the weirdest part of the ingredient list.

“We consider this beer to be in perfect style of [the Thorri] season,” says Dagbjartur Arilíusson, Steðji’s co-owner. “We get fresh whale testicles from a fin whale and we smoke it in an old Icelandic tradition way, smoked with dry sheep dung.”

Yep, you read that right… the testicles are smoked in sheep poop.

(Arilíusson notes that the foods enjoyed during Thorri include rams testicles, soured whale fat and rotten shark, by the way – so it’s perhaps not an ideal time for picky eaters and drinkers to venture to Iceland.)

The beer, not surprisingly, has been condemned by environmental groups – and some who have tasted it liken it to drinking campfire smoke. But the brewer says demand has been strong – so much so that they’re considering making it a regular offering.

It’s virtually impossible to find in the U.S., not surprisingly – but if you’re deadset on drinking a testicle beer, there’s always Wynkoop Brewing Company’s Rocky Mountain Oyster Stout, made with 25 pounds of bull testicles.

Not all novelty beers are meant to court controversy or are played for a laugh, though. Ninkasi, for example, is using its Ground Control – which is brewed with yeast that has been sent into outer space – to help raise awareness for the space program.

“Of course it has a marketing side to it, but to us, it’s about something else, too,” says Ninkasi co-owner and self-confessed space nerd Jamie Floyd. “I think people’s understanding of where we are in terms of space is pretty exaggerated. As we as a country are re-examining our connection to space, I think this is a great story for space [travel], even moreso than our brewery.”

Finding yourself intrigued by a novelty/stunt beer? Proceed with caution. There are some diamonds in the rough out there, but the hit/miss ratio is fairly low. Here’s how we fared with a few — and why I may have fewer visitors for the next few weeks…

The idea, in theory, was a good one. Make a beer that pairs perfectly with that pepperoni pie. And the ingredient list of this beer seems to use the right ingredients. In the end, though, what you get is something that lasts like someone strained a macro beer through Spaghetti-Os. (ABV: 4.6%)

Rogue has made a reputation out of brewing on the edge. And for the past few years, it has collaborated with Portland's Voodoo Doughnuts to concoct a special brew. This installment in the series has a wonderful scent - and brings the namesake pastry to mind, but the lemon tastes artificial, the vanilla and marshmallow seem absent and, as it warms, it takes on the qualities of a cleaning product. (ABV: 6.9%)

Ow. No, seriously ... OW!! Twisted Pine Brewing Co.'s ultra spicy beer contains six chiles including Anaheim, Fresno, jalapeño, serrano, habenero, and ghost chile. It's akin to sipping liquid fire and you won't taste anything but those peppers for quite a while. (Want heat without the same level of excruciating pain? Try a Habanero Sculpin from Ballast Point instead.) (ABV: 5%)

Ninkasi Brewing Co. wins points for offering a stunt beer without stunt flavoring. The yeast in this pitch-black stout survived a trip into outer space and back, but it doesn't seem to have an impact on the flavor. This is a beer with heavy chocolate, hazelnut and espresso notes that comes with a bitter finish. The high ABV is noticeable, but this is a beer that can - and probably should - be aged. It's good now, but I'd love to try it again in 18 months or so and see how the complexities have changed. (ABV: 10%)