At this point, only a miracle can save Greece from disaster 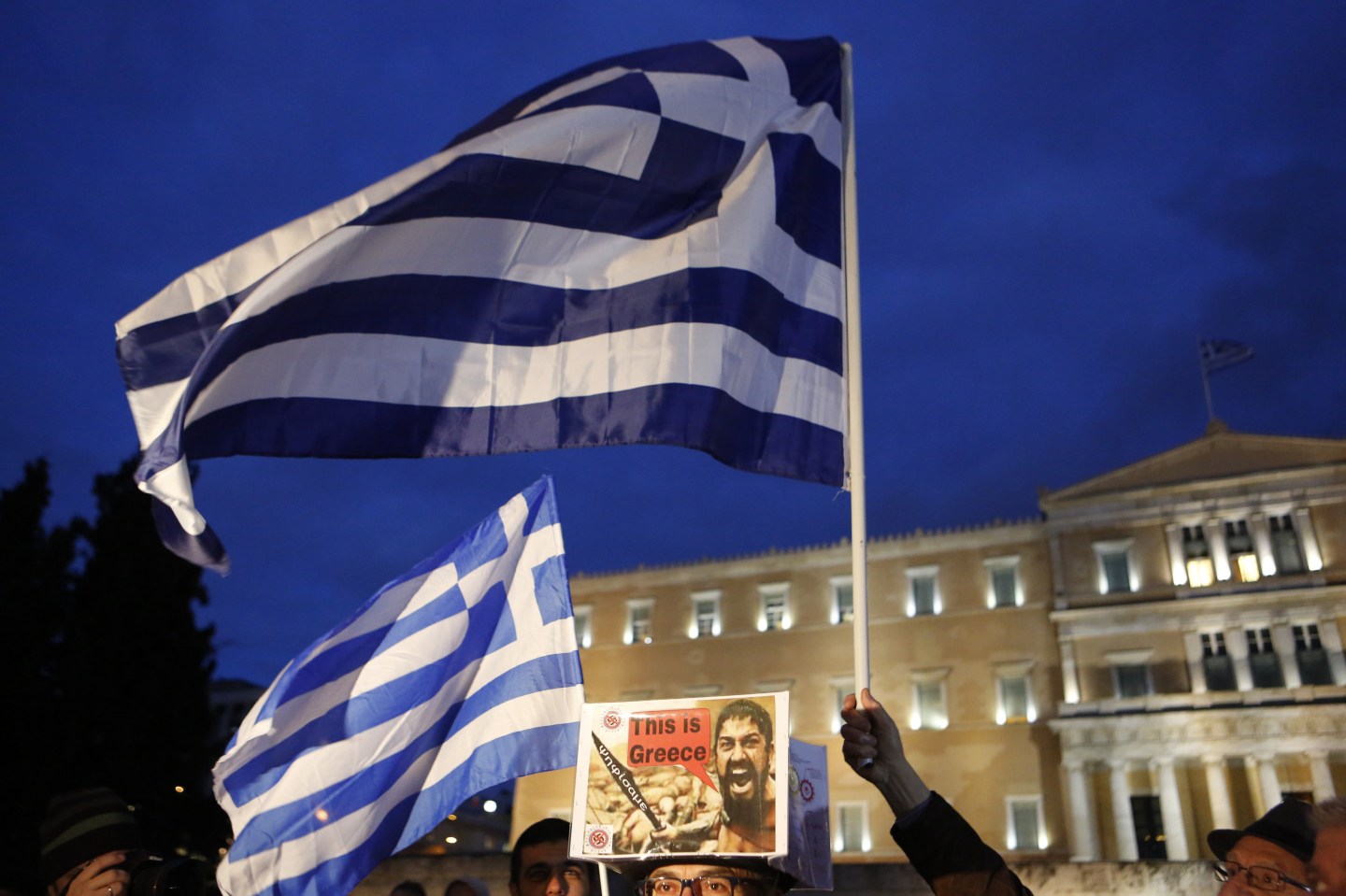 SYNTAGMA SQUARE, ATHENS, ATTICA, GREECE - 2015/02/16: captionA large Greek flag flies outside the Greek Parliament. Greeks protested a second day in a row in support of the government and against austerity policies imposed by the EU. The turnout on the day of the crucial Eurogroup meeting was considerately lower than i the previous protests. (Photo by Michael Debets/Pacific Press/LightRocket via Getty Images)
Photograph by Michael Debets — Pacific Press LightRocket/Getty Images

The new leftist Greek government is running out of cash fast. Elected on the promise to disburse large amounts to those hurt by austerity, it cannot even pay the regular obligations of the State. Within two to four weeks, Greece will not be able to pay salaries, pensions and loan obligations to the International Monetary Fund and other lenders. The clock is ticking and time is running out. Greece must grasp the only lifeline left and negotiate with creditors now to save itself.

By the middle of May, Greece will need to refinance $3 billion of its Treasury bills. Typically, Greek banks buy most T-bills, but the European Central Bank has placed restrictions on these purchases. As a result, Greece is faced with the burden of covering $756 million worth of new T-bills, as well as repay $836 million to the International Monetary Fund (IMF) on May 11. That’s a total of about $1.6 billion, which doesn’t include paying salaries, pensions and other government expenses.

Greece also faces a significant shortfall of tax revenue since many Greeks expected the government to reduce, forgive or postpone tax obligations. With very little reserves to save the country from bankruptcy, the government has forcibly appropriated the cash reserves of pension funds, municipalities and agricultural subsidies in transit. By June 18, Greece would need to spend $4.7 billion, which includes $2.16 billion in T-bills, as well as repaying $2.55 billion to the IMF.

What is the solution? By far, the best solution is for Greece to strike a reasonable deal with its European Union and IMF creditors. The creditors would provide new cheap financing (present EU/IMF financing is at 1.82% interest rate) and Greece would implement government cuts, restart privatizations, allow competition in closed sectors (such as trucking), and liberalize the labor market to make the economy more competitive. The present government, Syriza, was elected on a platform that promised exactly the opposite of what is required today. But a sharp U-turn is necessary for Greece not to go bankrupt.

If a deal with the creditors is not struck, one of two scenarios are likely to happen. In the first, “bankruptcy within the Euro” would occur. This is what the government seems to prefer — a situation in which Greece keeps paying salaries and pensions only. Since it does not pay the external loans, including money it owes the IMF, the country effectively goes bankrupt. Banks would struggle to survive as officials implement measures to keep citizens and investors from pulling their money out of the country. The ECB will have to decide whether to keep supporting Greek banks in a Eurozone country in default. Eventually, the ECB or Greek government will force the country to adopt a new Drachma.

In the second scenario, Greece would pay the external loans with euros, but pay salaries, pensions and other government expenses with an ‘I Owe You,’ or alternative currency, which would quickly become a new internal, highly devalued currency. Banks may be precluded by the ECB from accepting them all, but, one way or the other, they will be exchanged at a deep discount to euros by a frightened and impoverished population. Capital controls and withdrawal limits will be imposed. Pretty soon the ‘I Owe Yous’ will be named the New Drachma.

In both scenarios, within weeks or months, Greece would abandon the euro; Greek banks would struggle with bank runs and eventually collapse. Since the new currency is highly devalued, prices for local goods and services would rise rapidly, impoverishing Greece to levels reminiscent of incomes in the 1950s. As a result of bankruptcy, the country would struggle with a shortage of credit; therefore, causing a shortage of key imports, such as fuel and medicine.

In either scenario, the downside of bankruptcy is so bad that the possibility of a deal with creditors to avoid it is almost too good to be true. But the Greek government, elected to push for a good deal, instead seems to revert to its extreme left roots. Its ministers talk about a “rupture with the creditors” and the prime minister states “Greek Democracy cannot be blackmailed.”

At this point, only a miracle can save Greece from impending disaster.