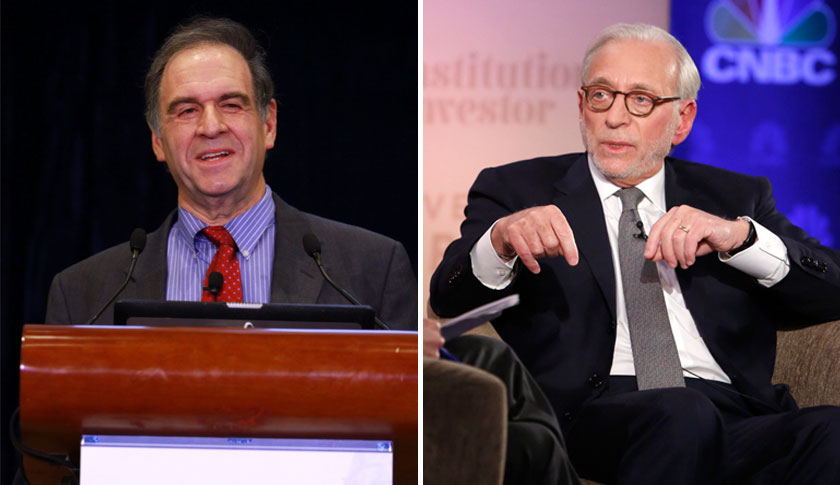 Call it the battle of the big machers.

In the past week, the fight over the future of chemical giant DuPont (DD) has brewed up a spat between a Yale University professor and the activist trying to force his way onto DuPont’s board. Yale management guru Jeffrey Sonnenfeld has told former corporate raider and hedge fund manager Nelson Peltz to stop telling members of the media to write articles questioning Sonnenfeld’s integrity. Peltz has countered that Sonnenfeld has been spreading misleading information about his fund’s performance.

The brawl has led to CNBC interviews from both sides, dueling letters to the editor in the Wall Street Journal, an article in the New York Post accusing Sonnenfeld of having financial ties to the CEOs he publicly defends, and coverage in Jewish Business News. High-voltage Fox Business correspondent Charlie Gasparino weighed in on the “fat cat, cat fight” as well.

The dispute began on April 1, when the Wall Street Journal published an op-ed by Sonnenfeld pointing out the poor performance of shareholder activist hedge funds. The article’s headline suggested it was a critique of activist funds in general, but a good portion of the article—five out of the 12 paragraphs—focused on Nelson Peltz and his hedge fund, Trian Partners. Sonnenfeld criticized Trian’s investing performance over the past four years, saying it underperformed both the market and DuPont, which Peltz has been criticizing.

Sonnenfeld said that several companies appear to have performed worse once a Trian representative joined their board. One company, Chemtura, ended up in bankruptcy. Another company, financial firm State Street, rejected Trian’s demands that they receive a board seat and that the company be broken up, and it has gone on to do just fine, Sonnenfeld wrote, outperforming the market during the past four years. Peltz and Trian have proposed similar measures at DuPont.

“Clearly, this undermines Mr. Peltz’s argument that DuPont’s board needs Trian and Mr. Peltz to drive better returns,” wrote Sonnenfeld. The Yale professor, who is also a columnist for Fortune, called Peltz’s campaign against DuPont “costly,” “distracting,” and focused on “short-term gains.”

The next day, both Sonnenfeld and Peltz appeared on CNBC in separate interviews. Peltz said that the “professor should do some more digging” and get his facts straight. The investor also called Sonnenfeld’s numbers “cherry-picked” and wrong. Peltz said his investment firm had returned 137% since its founding in late 2005, which far outperformed the market during the same time. He also said on air that Trian’s performance was 34 percentage points better than the S&P 500 during that same period, a figure that Peltz had to later restate to the SEC in a filing. Trian’s performance was only 29 percentage points better than the S&P 500.

The squabble didn’t end there. Last week, the New York Post published an article suggesting that Sonnenfeld regularly comes to the public defense of CEOs or companies that have financial ties to his Chief Executive Leadership Institute, a Yale non-profit that gives out awards and hosts conferences for top executives. The article claimed that Sonnenfeld doesn’t disclose those ties. The Jewish Business News, a website, followed with a report titled “Murdoch Outlet Coming To Aid Of Nelson Peltz In His War Against Prof. Jeffrey Sonnenfeld,” though the article admitted it had no evidence that Peltz had any connection to the NY Post piece.

The NY Post cited DuPont as an example in which Sonnenfeld had defended a company and its CEO for which he had ties. But DuPont has never given money to Sonnenfeld’s institute. In December 2013, Yale’s Chief Executive Leadership Institute gave DuPont CEO Ellen Kullman a leadership award. Coming to the defense of an executive who Sonnenfeld’s institute has already deemed a top leader doesn’t seem like a conflict.

For instance, Sonnenfeld said he has been critical of Hewlett-Packard, giving Carly Fiorina low grades as a CEO and calling the pay package for her successor Mark Hurd “a ‘damning indictment’ of CEO hiring contracts,” in the Seattle Times in 2010. Hewlett-Packard has been a sponsor of Sonnenfeld’s non-profit in the past. Although Sonnenfeld did come to HP’s defense when its board suddenly decided to fire Hurd after allegations that he had had an inappropriate relationship with an “adult” actress HP had hired to act as a hostess at client events.

“There is no correlation between the people I will speak out in defense of and of those that I criticize with a participation in our institute,” says Sonnenfeld.

Sonnenfeld says he has written numerous articles criticizing activist hedge fund managers, including Peltz, in the past. He says he had no contact with DuPont or Kullman about the WSJ op-ed before it was published. But, weeks before, Fortune received a spreadsheet from a source close to DuPont with some of the data that Sonnenfeld cited in his WSJ article. Sonnenfeld says the data was prepared by one of his own researchers and that he had been circulating it for months before he used it in the op-ed. The spreadsheet Fortune received did not cite Sonnenfeld as the source.

Trian and Peltz declined to comment for this story.

Sonnenfeld says that Peltz had targeted him privately even before he wrote the editorial. Starting earlier this year, Sonnenfeld says he had received messages from friends and colleagues that Peltz was looking to have a meeting with Sonnenfeld to seek his support in Peltz’s proxy fight with DuPont. Peltz is trying to get four representatives elected to the chemical company’s board, including himself, as part of an effort to break up the company. DuPont has resisted.

Peltz and Sonnenfeld had scheduled a lunch before Sonnenfeld published the WSJ op-ed. Peltz cancelled the lunch after the op-ed came out. Since the op-ed, Sonnenfeld says he has heard from acquaintances that Peltz is looking for a way to “neutralize” Sonnenfeld. Sonnenfeld jokes that his wife has had him starting the car on his own recently. But Sonnenfeld admits Peltz was likely speaking metaphorically.