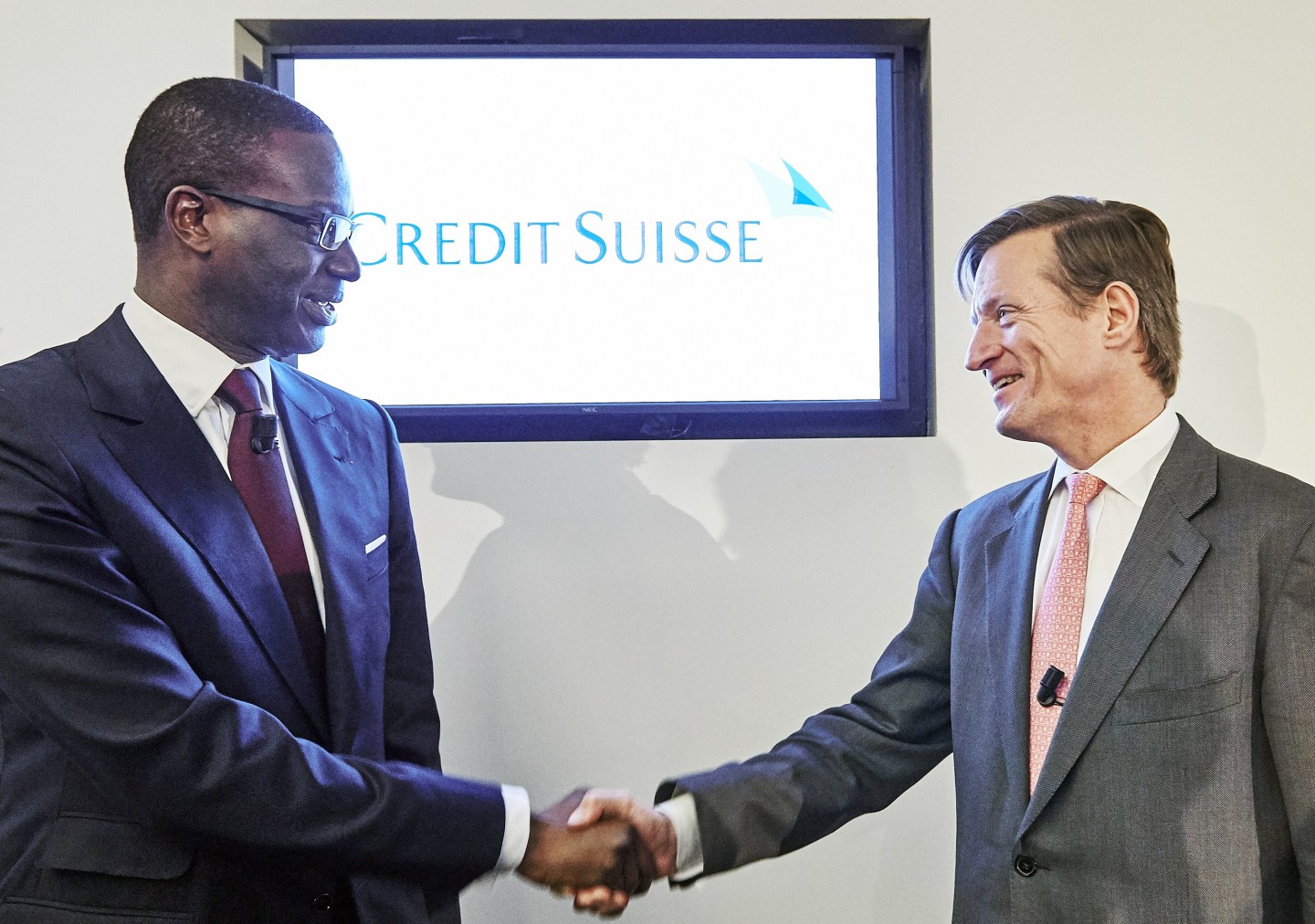 Credit Suisse CEO Brady W. Dougan (R) and Credit Suisse designated CEO Tidjane Thiam pose for the media at the end of a press conference on March 10, 2015 in Zurich after Credit Suisse announced that Thiam, currently chief of UK-based insurer Prudential, will take over as chief executive from Brady Dougan who will step down at the end of June. AFP PHOTO / MICHAEL BUHOLZER (Photo credit should read MICHAEL BUHOLZER/AFP/Getty Images)
Photograph by Michael Buholzer — AFP/Getty Images

Tough new rules on risk and a surging Swiss franc weakened Credit Suisse’s cushion against future losses in the first quarter. With regulators still working on capital requirements for banks’ trading operations, there are potential headwinds to come.

“The risk is that the debate around the incoming CEO shifts from the potential for strategic change to the risk of capital raising,” said Omar Fall, an analyst at Jefferies.

Credit Suisse’s shares were the second-biggest faller in the European banking index, down 3% against the index’s 0.75% rise by mid-morning.

Until now the expectation has been that he will further cut Credit Suisse’s investment banking arm to try to balance it more evenly with its less costly private banking activities.

Like larger U.S. rivals, Credit Suisse saw a jump in sales of bonds and shares due to market volatility in the first quarter and said the momentum had continued into the second quarter.

But Credit Suisse still has difficulty in reining in costs. It had to cut its cost savings target of 4.5 billion Swiss francs ($4.32 billion) for this year to between 4 and 4.25 billion francs, citing issues in compliance and regulation.

The bank also warned that future legal bills not covered by provisions could cost it up to 1.8 billion francs.

New capital rules and more electronic trading have squeezed revenue from fixed income, currencies and commodities trading, or FICC, putting banks like Credit Suisse under pressure to carefully scrutinise which activities can turn an adequate profit to justify their capital requirements.

The bank’s common equity tier one ratio (CET1), a key measure of its financial strength, dipped in the first quarter to 10% from 10.1% at the end of the fourth quarter.

Overall, Credit Suisse generated net profit of 1.054 billion Swiss francs ($1.10 billion) in the quarter from 859 million francs a year ago, beating a consensus forecast of 1.034 billion francs. Strong inflows of 7 billion francs into the bank’s Wealth Management business supported the overall result, as did a gain on the accounting value of the Swiss bank’s own debt of 117 million francs.

Sales of bonds and shares rose 9% and 11% respectively but there was a weak showing for fees from advising on deals and underwriting sales of debt and equity for corporates which fell 27% and 25%. That’s despite the fact that the global M&A market had posted its strongest first quarter since 2007, volumes surging 26% year-on-year thanks to big deals in healthcare and real estate, according to figures from Dealogic.

Credit Suisse said the trend for both advisory and underwriting had improved in the second quarter.

The first quarter is traditionally a strong one for most investment banks, and this year the Swiss National Bank’s abandonment of a currency cap, a flood of European Central Bank money, and expectations for a U.S. rate hike were a boon for volatility.