Will Apple’s new complex really be the ‘greenest building on the planet’? 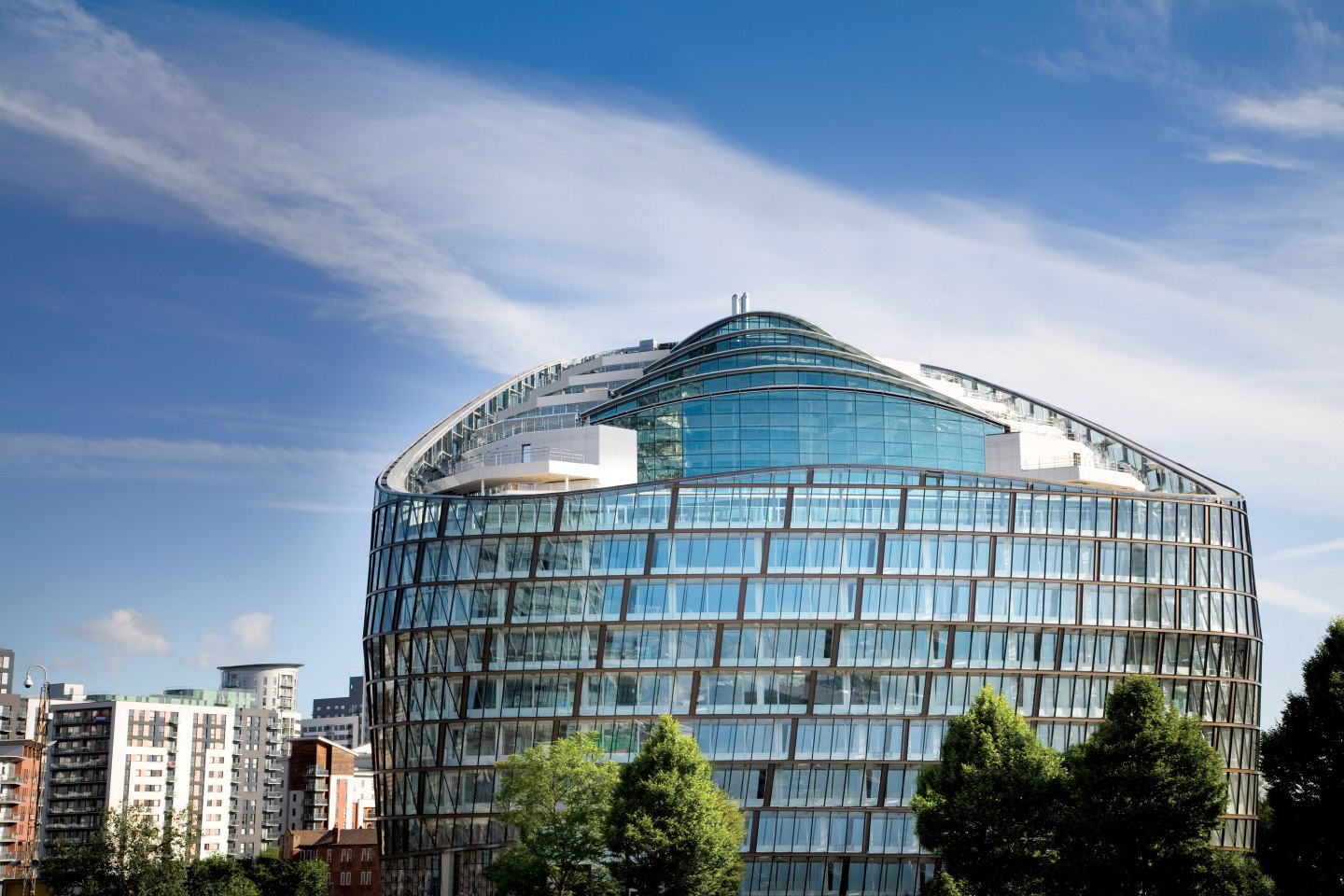 Courtesy of The Co-operative Group

At last year’s Climate Week conference, Tim Cook claimed the Apple Campus 2, set to open in 2016, will be “the greenest building on the planet.” But some experts doubt it will live up to the description.

Tech companies like Twitter, and Google, and Adobe have led the way with sustainable features in their headquarters, but sustainably-focused change in building design and construction, while slow to come, is now happening all over.

With Earth Day on Wednesday, Fortune decided to investigate which would could be the “greenest building.” Our conclusion? There seems to be no clear winner, but numerous buildings are claiming the admirable title of the best or most environmentally friendly building. And really, the more of these buildings, the better, so keep up the competition. Here are just seven building making such claims.

The claim: the “world’s most environmentally friendly office building.” It was rated “Outstanding” by the coveted BREEAM NOR, a Norwegian independent assessment of buildings’ environmental performance.

Powerhouse is a renovation of a building that had started out green with photovoltaic panels. However, as the Powerhouse, it became an energy positive building, which is a stricter standard to hold to than the energy auditing of the Net Zero Building Certification. “Energy positive” means that over a lifespan of 60 years, this Norwegian office produces more energy than it consumes, though geothermal energy and a rooftop solar photovoltaic system (the largest in Norway)–and that promise takes into account the energy required to produce the materials for building it, plus building construction.

The claim: The Edge is certified as the “world’s most sustainable office building” while being the second building to rate the coveted “Outstanding” BREEAM award.

The Deloitte corporate headquarters is 430,000 square feet with passive temperature control, energy efficient design, and it generates its own electricity with a wall of solar panels. An aquifer thermal energy storage system uses wells for heating and cooling. The building is also the first to use Philips’ Ethernet-powered LED connected lighting, which can be controlled depending on movement, brightness of the environment. Graywater is collected on site for flushing toilets and watering plants. The building is located by public transit and bike routes, with 500 bicycle parking spots.

The claim: it was the first to earn an Outstanding, the highest BREEAM rating possible.

When one Embankment Place was built above Charing Cross Station in the early 1990s, it was the first building to use air rights in the UK. It also achieved another first: it received the first BREEAM Outstanding award, the highest BREEAM rating possible. Now refurbished for efficiency, One Embankment Place has tri-generation combined cooling powered by recycled, refined vegetable oil. Waterless urinals and low-flush toilets help lower water use. In construction, 95% of materials were sourced responsibly and 96% of the waste was diverted from the landfill. The Guardian reported that One Embankment Place emits 40% less carbon than a typical building its size, and that 20% of its heat and 60% of its energy needs are generated on site. Estimated annual savings from these innovations was put at about $370,000, although PwC had even more dramatic predictions.

The claim: Sustainable Brands called One Angel Square “the most environmentally friendly building in the world” when it got a 95.15% BREEAM score, the highest ever awarded.

One of the most unusual features of The Co-Operative Group headquarters, a cooperatively run group of food retailers, financial services, and other services, is that its power is generated by crops grown on the coop’s farms. Heating and cooling are conducted using air drawn from below the basement, and the building has a double-skin “duvet” that helps insulate it in cold weather while allowing ventilation in summer.

The claim: Bullitt Center declares itself “the greenest commercial building in the world,” and once fully occupied, it will get certified as a Living Building.

The Bullitt Center website lays it right out there: “The era of harm reduction, half steps, and lesser evils is behind us.” Indeed, this “deep green” building, which is supposed to have a 250 year lifespan, doesn’t do anything halfway: “instead of pursuing just net zero energy, net zero water, net zero carbon, composting toilets, toxic-free materials, an enticing stairway, 80+ percent day lighting using high-performance windows”, said a note from Bullitt Foundation President Denis Hays, they chose all of the above. Also in use: 14,000+ square feet of solar array, a 56,000 gallon rainwater cistern, 26 geothermal wells. All the products used are off the shelf, to set an example for what’s possible. Plus it’s well situated with a perfect Walk Score of 100. The six-story building has numerous tenants including Bullitt Foundation, which promotes environmental activities in the Pacific Northwest.

The claim: This LEED Platinum-certified building was called by Inhabitat “the greenest office building in the world.” The building achieves low energy costs through passive heating and cooling, while the energy used is renewable–the roof is covered both in greenery and a photovoltaic array. Walls are thick and insulated to keep the heat or cool air inside. At the time of opening NuOffice aimed for 30 kilowatt hours per square meter of annual energy consumption, compared to the average office’s 100 to 150. NuOffice counts among its tenants Estee Lauder, Giorgio Armani, McLaren, and NTT Data Germany.

The Tower at PNC Plaza

The claim: The tower’s website declares it “more than the world’s greenest skyscraper” and it is expected to achieve LEED Platinum certification

This approximately 30-story, 800,000 square-foot building will be “breathing,” with an emphasis on opening doors and windows, as well as being solar-assisted and naturally ventilated with a solar chimney. Green roofs will be irrigated with harvested rainwater, and low-flow fixtures and waste water systems will reduce water use elsewhere. The tower will serve as the PNC Financial Services Group Headquarters.