Career advice from chef April Bloomfield: No crying in the kitchen 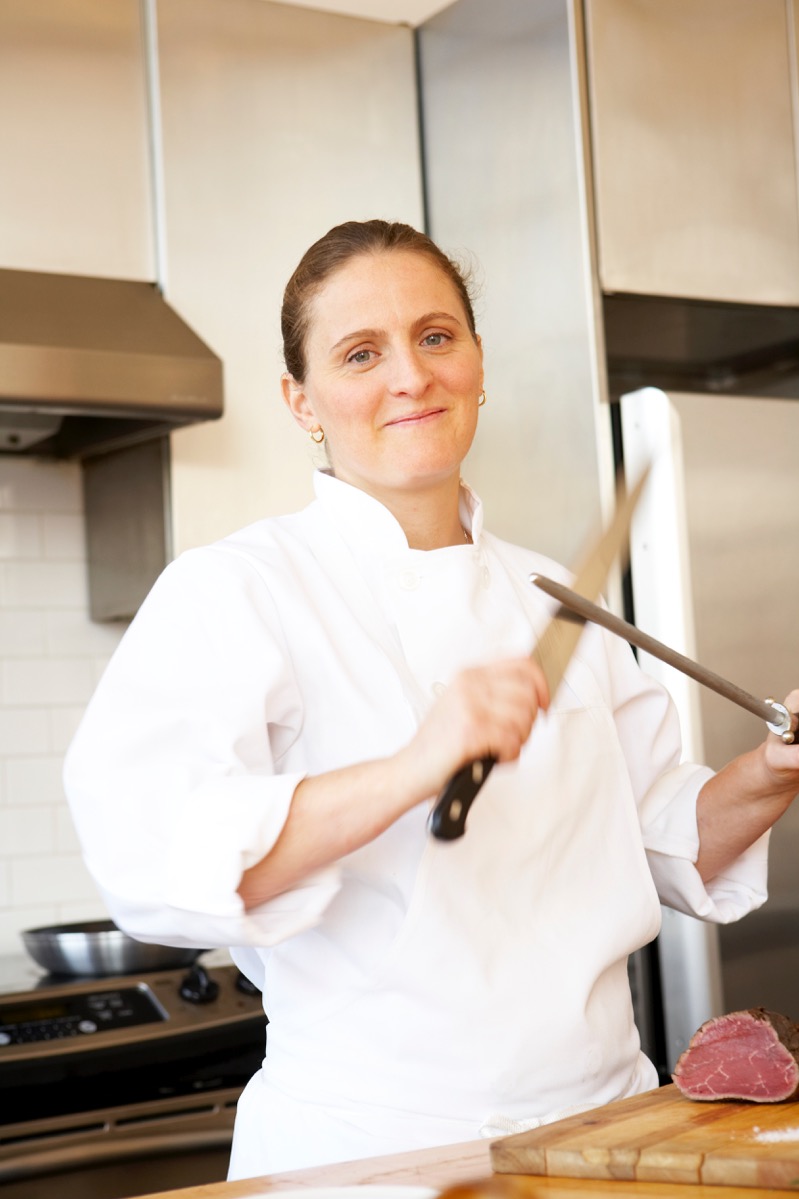 If you’ve ever referred to yourself as a foodie, you know chef April Bloomfield. The Birmingham, England native is the culinary mastermind behind five award-winning restaurants, all co-owned with partner Ken Friedman.

Two Bloomfield eateries, The Spotted Pig, a New York City gastropub, and The Breslin, located in the city’s Ace Hotel, have received the much-coveted blessing of the Michelin Guide, with one star apiece. Last year, the prestigious James Beard Foundation named Bloomfield the best chef in New York City. Now, she’s written her second cookbook, A Girl and Her Greens, which goes on sale today.

That’s an impressive resume. But perhaps even more impressive when you consider how few female chefs have managed to climb to the top of the food world. A 2014 analysis by Bloomberg found that women held just 6.3% of head chef jobs (10 out of 160) at 15 prominent U.S. restaurant groups.

Bloomfield sat down at The Breslin to talk with Fortune about how her leadership skills have evolved, what she learned from her biggest professional mistake and why you should never, ever cry in the kitchen.

What follows is an edited transcript of that conversation.

April Bloomfield: My leadership and managerial skills didn’t come easily. I became a manager very young. My first sous chef job I was, maybe, 25. It was a bit too early for me. But it’s on-the-job training. You really just get stuck in there and it’s trial and error. You learn by your mistakes, and hopefully you don’t keep making them. And if you do, you just keep trying to fix it.

How have you improved over the years?

Becoming more patient. Being able to take a step back and see the bigger picture. I’m usually quite a reserved person, but it’s helped to have more reflection on how I manage people. Thinking: ‘How do I affect other people, and how do they affect me?’ All that fun managerial stuff. I’d probably say it’s the hardest part of my job, but it’s great when you get it right.

In the past, some interviewers have described you as shy. Do you think that’s accurate?

It was, 5, 6, 7 years ago. But I’ve done a lot of work on myself. It’s taken a lot of energy and a lot of breaking mental barriers to get to. I still like to observe. I don’t like to rush into things. I like to observe and see what the situation is before talking.

You’ve been partners with Ken Friedman for about 11 years. What makes that relationship work?

We’ve learned to communicate person-to-person. We’ll call and talk more than sending emails or text messages. We just leave each other to do our own thing, really. He usually does front stuff and raising money, and I do the creative side, food-wise. It seems to work.

Have you made any big mistakes along the way?

When I opened the old John Dory in 2008. [Fortune note: Bloomfield and Friedman originally opened the John Dory in New York’s Chelsea neighborhood in 2008. The restaurant closed less than a year later, but has since reopened as the John Dory Oyster Bar in the Ace Hotel.] I learned from that—not to hold back. Making sure that I’m heard. Trying to be more forward. I had some reservations about the area and space that I didn’t bring up. It comes with time, and it comes with experience.

There aren’t many female chefs who’ve achieved what you’ve achieved. How has being a woman impacted your career?

I did have an occasion where one of my chefs asked me if I wanted to do pastry. I’d been cooking for about two years and I already had this perception that pastry was a woman’s job, and I had my eye on the prize, and the prize was saute and grill. The hard work behind the hot stove—that’s where I felt challenged. So I passed on that opportunity to do pastry. I don’t know if he was asking me to do that because I was a woman, but in my mind I had that perception.

Did you ever end up trying pastry?

I did. It took me 7 years. It was in a small restaurant and everybody took their turn. I did pastry on my terms.

Any advice for women trying to break into a male-dominated field?

I only know my way. I’m a woman. I’ve only had the experiences I’ve had and they’ve been positive. If you’re a women and you’re interested in working in a kitchen, run with it. Don’t ever think there are obstacles in your way. Work hard. Keep your head down. Ask questions. Be a sponge. If you fail or make a mistake, just keep trying.

What do you look for when you hire?

Drive. A good work ethic. Ability to concentrate. It the nuances that you need to pay attention to. I think that’s what makes people successful—it’s the details. Our job is so tactile and hands-on that you really have to bring people into the kitchen and observe them. Maybe they’re over-confident and think they know it all. Is it better to get someone who’s green, who you can mold? I like a bit of both. Also, you spend so much time together, it’s really important that you get along.

Do you think about gender or creating a balanced staff when you’re hiring.

I hire by ability. If they can do the job, they can have the job.

Cooking is a legendarily brutal job. Is it possible to keep balance in your life?