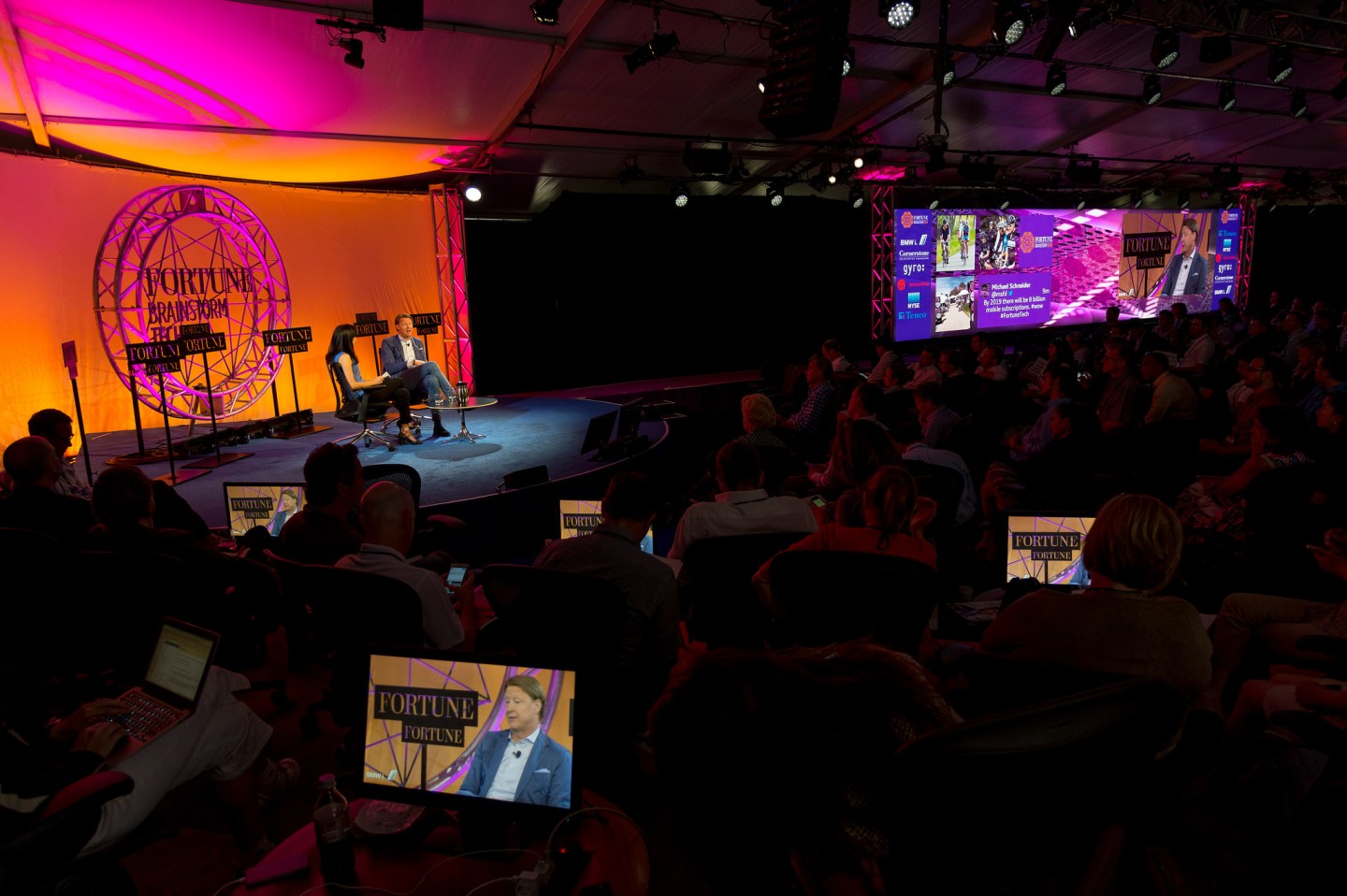 Technology-industry business conferences come and go. Fortune’s Brainstorm franchise, now in its 14th year, endures because of its unique blend of the power of Fortune 500 companies, the excitement of the emerging entrepreneurs of the tech world, and the connective tissue of the investors who finance them. It doesn’t hurt that Brainstorm Tech takes place on the gorgeous campus of the Aspen Institute in Colorado. It’s not the easiest place to get to, but Brainstorm Tech attendees tend to stick around, enjoy the tranquil surroundings, and have a helluva good time in Aspen while they’re at it.

With these three constituencies in mind—big-company CEOs, startups with juice, and financiers from every “asset class” from venture capitalist to private equity—here’s a selection of participants in this year’s Brainstorm Tech.

Jeffrey Immelt, in the news of late for slimming down his company, General Electric, to its industrial roots, will be in Aspen. Immelt sees GE’s business as core technology, especially with the advent of the so-called Internet of things, a perfect opportunity to tie together the machines that GE makes.

Other mega-cap executives on our stage will be Hubert Joly, CEO of Best Buy, a massive seller of consumer electronics, and Helena Foulkes, president of the CVS pharmacy chain, a key player in digital health. Another Fortune 500 member to join the conversation is Flextronics, the electronics manufacturer that increasingly is becoming a designer of its customer’s product. CEO Mike McNamara will make his first Brainstorm Tech appearance.

Change is a perennial topic in the pages, on the digital properties, and onstage for Fortune. We’ve been around a long time—85 years, but who’s counting? Okay, I am—and so we’re particularly attuned to big organizations and how they adapt. No one is better positioned to discuss change than the CEO of a Silicon Valley stalwart being spun away from other parts of its business. Dion Weisler, who will head the spun-out personal computer business of Hewlett-Packard (to be known as HP Inc.), joins us for the first time.

Another giant that knows about all about transformation is Apple. Most have focused on Apple’s transformational products. Yet as the company has charted a course without its iconic founder, managing its people has become more important than ever. Denise Young Smith, Apple’s top human-resources executive, will discuss this monumental task. Workday already is a big company, but the companies that buy its HR-oriented software are among the biggest, as its CEO, Aneel Bhusri, will be able to attest. Ed Catmull, president of Pixar and Disney’s animation studios, can talk about everything from startups to big entertainment companies to Steve Jobs. In fact, we expect him to.

Speaking of startups, they are the life blood of Silicon Valley, and Brainstorm is where to see the Fortune 500 companies of tomorrow. One of the most likely companies to get there is Pinterest, whose CEO Ben Silbermann is heading to Aspen. Joining him in the lineup this year are Stewart Butterfield of red-hot communications tool Slack; John and Patrick Collison, the brotherly leaders of payments software maker Stripe; and Evan Williams, CEO of Medium.

We’ll have plenty more startup founders and CEOs, including Katia Beauchamp of Birchbox, Clara Shih of Hearsay Social, Apoorva Mehta of Instacart, and Katrina Lake of Stitch Fix. Ben Kaufman, CEO of GE partner Quirky will be in Aspen. We’ll even feature the CEO of a public company worth $3 billion, Brian Sharples of HomeAway, that gets far less attention than its theoretically more valuable competitor, Airbnb. (That startup’s CEO spoke at Brainstorm Tech three years ago.)

As I mentioned, financiers are critical in technology—and at Brainstorm Tech. We’ll be joined this year by a special guest, private-equity pioneer Henry Kravis, whose KKR has been particularly active in technology of late. Repeat Brainstorm attendee Egon Durban of Silver Lake appeared four years ago to discuss his successful buyout of Skype. Since then his firm helped to take private Dell. Venture capitalist is just one hat that Reid Hoffman, a partner at Greylock, wears. He’s also the founder and executive chairman of LinkedIn, a bestselling author, and a bonafide member of the PayPal mafia. With Hoffman it’s a certainty there’ll more topics than time to discuss them.

The best news of all is that these people are just a selection of participants in Brainstorm Tech. Watch our conference web site for additional names between now and July 13th, when the conference begins. Brainstorm Tech itself is an invitation-only event, but we’ll be streaming some sessions, writing about all of them, and encouraging our attendees to chat them up on social media. There will be a ton to say.