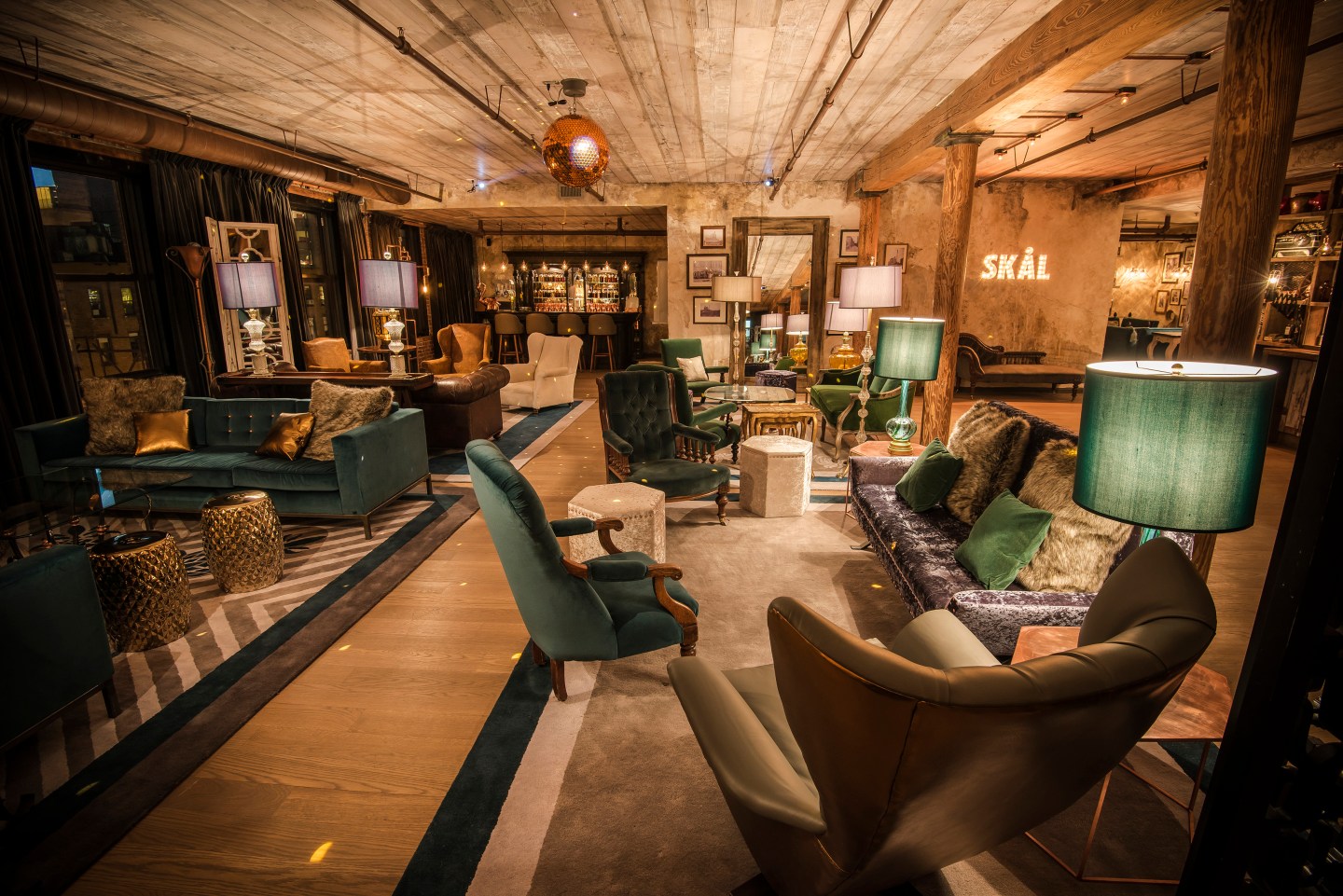 Absolut’s high-end Elyx vodka has something most New Yorkers dream of: a 5,000-square-foot apartment in a swanky neighborhood.

The apartment, which at one point belonged to actor Mickey Rourke, was built specifically to promote just one spirit brand: Absolut Elyx. It is a concept that is unheard of in the alcoholic beverage industry, which is always on the hunt for innovative ways to make expensive beverages seem luxurious.

To get to the loft, which is just across the street from a massive Apple store and near an entrance to the popular High Line park, a visitor arrives at an unassuming front door, which leads to an unremarkable private elevator.

Once inside the apartment, guests are greeted with a completely different vibe. Absolut Elyx describes the space as “raw lux,” or raw luxury. It combines velvet, fur and leather furniture pieces with raw and worn decorative items. The furniture and decorations, like a copper disco ball that hangs in the middle of a lounge area, come from Sweden and other European countries.

Features include flamingo wallpaper in the bathroom, a photo of the Swedish king and queen, and a lot of copper details throughout the loft. Absolut is made in Sweden and copper plays an important role in the distillation process for Absolut Elyx. The flamingo paper, well, that’s just for fun.

“We really wanted to create a physical manifestation of our brand,” Jonas Tahlin, CEO Absolut Elyx, told Fortune. “A space we could really talk about the aesthetic and the values of the brand.”

There is also a private apartment connected to the Absolut Elyx space for Tahlin and his wife, which is separated by a trap door near the bar. To enter, Tahlin needs to simply pull a book from the massive shelf. (To protect his privacy, Fortune won’t say which one does the trick).

Absolut Elyx has been in the U.S. market for just about two years, competing with Grey Goose, Belvedere and Ketel One for the top shelf vodka business that is worth about $1.34 billion annually. Vodka is the most popular spirit category in the U.S. but volume grew by only 1.6% last year, according to the trade association Distilled Spirits Council of the United States.

Much of the category’s woes are linked to the poor performance of flavored vodkas. Meanwhile, whiskies and tequilas have performed far better in recent years and stolen market share and major media attention.

Absolut Elyx, still relatively new to the market, is reporting surging growth as it continues to expand into the U.S. market. For Pernod Ricard’s current fiscal year, which runs from July through June, year-to-date demand for Elyx is up 240% from the year before. Elyx is priced at about $40 per 750-milliliter bottle, double what regular Absolut costs. High price points also come with better margins, alcohol industry experts have said.

Tahlin concedes the vodka category is facing challenges in the U.S., saying Americans have been taught that vodka is supposed to be “tasteless, odorless and colorless.” Whiskey and tequila brands often talk about taste, so vodka seems a little boring in comparison.

But Elyx has a taste to it, and Tahlin says that the flavor varies. Some taste butterscotch while others sense vanilla or citrus. Elyx isn’t “flavored,” and the 40-year-old Swede says as long as he’s in charge, it never will be.

“People are going to brown spirits because they are looking for something they can enjoy, something to sip and savor, and maybe something that has a production story to it that is genuine,” Tahlin said. “Elyx launches into that trend quite fortunately.”