Greece: the rout is on after IMF rebuffs request to delay payment 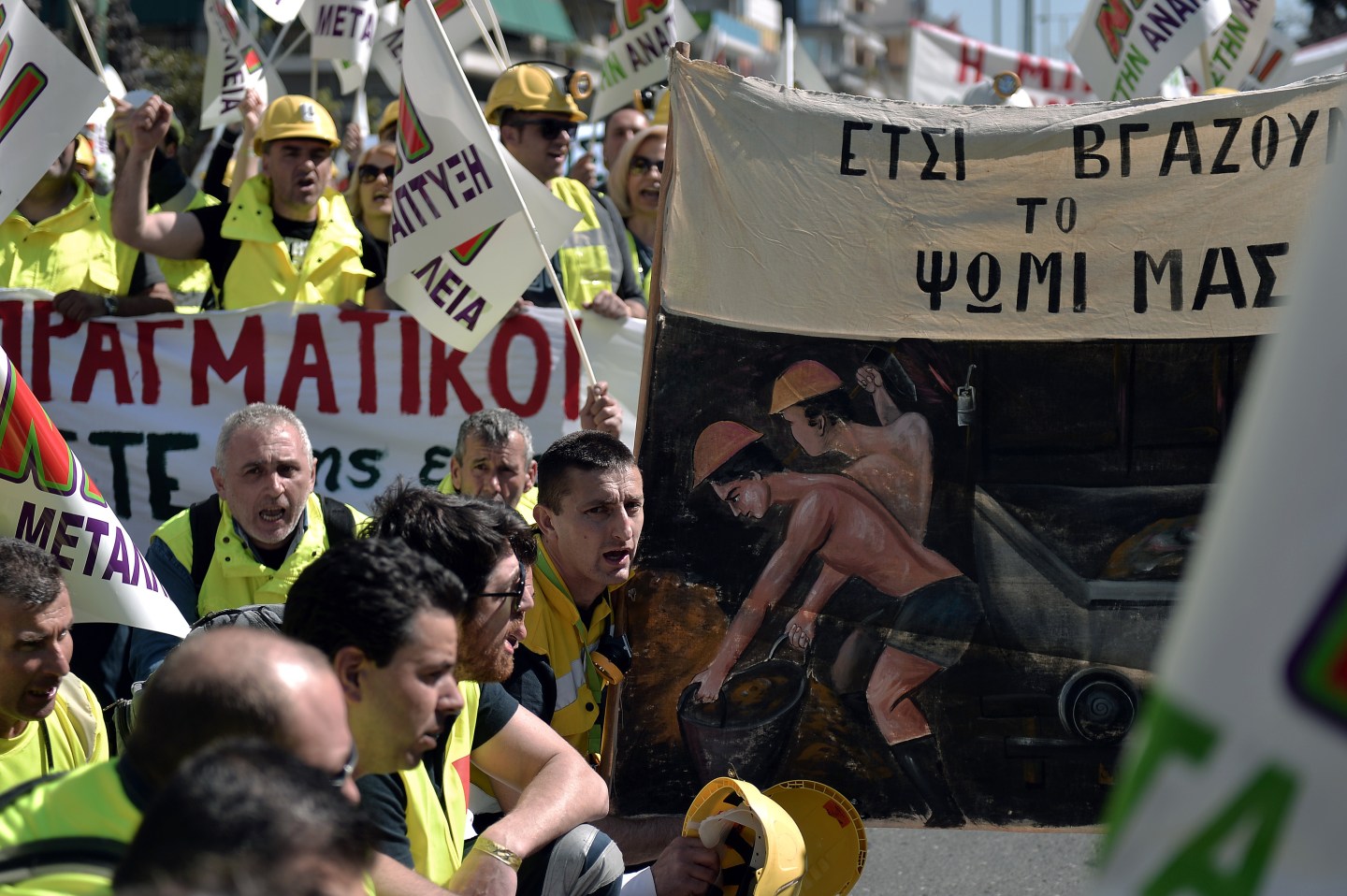 Miners, workers and supporters of an important gold mine project in northern Greece demonstrate outside the Ministry of Development in Athens on April 16, 2015 to put pressure on the radical left-wing government. The Greek authorities oppose the investment but have yet to take a final decision on its future. For the past three years, the promise of a huge investment by a Canadian mining company has deeply divided the inhabitants of this spectacular corner of the Halkidiki peninsula, setting neighbours and even family members at each others' throats. AFP PHOTO / LOUISA GOULIAMAKI (Photo credit should read LOUISA GOULIAMAKI/AFP/Getty Images)
Photograph by Louisa Gouliamaki — AFP/Getty Images

Hopes that Greece can avoid default are fading fast Thursday after a report claiming that the International Monetary Fund rejected an overture from Athens on delaying some of the debt payments it owes this year.

The report, in the Financial Times, comes on the back of a spate of news showing how Greece is fast running out of cash, failing to persuade its European partners to unlock the remaining funds in its bailout program.

Standard & Poor’s downgraded the country’s rating earlier this week, warning that it may run out of money as early as next month without the bailout funds.

“Without deep economic reform or further relief, we expect Greece’s debt and other financial commitments will be unsustainable,” S&P said.

German Finance Minister Wolfgang Schäuble, meanwhile, told Bloomberg Wednesday that there was virtually no chance of agreeing to release money to Greece when Eurozone finance ministers meet on April 24, because the Greek government hasn’t presented any convincing plan on how to replace the measures in the bailout that it objects to.

The process of creeping default is already well underway in any case. The Greek state’s arrears rose to €3.25 billion in February, according to the General Accounting Office’s data, as tax revenues fell short of expectations, forcing the government to delay small payments where it could (notably to hospitals and healthcare providers).

Taken together, the news has turned the gradual sell-off in Greece’s financial markets over the last couple of months into a stampede. Yields on three-year government bonds, which would be the most sensitive to a default, shot up by over 3.3 percentage points to nearly 28% in the European morning. By contrast, Italy, which has over €2.1 trillion in debts to service, pays only 0.29% on its three-year bonds, thanks to the European Central Bank’s unprecedented policy of easy money.

(Interestingly, today has been one of the first times this year that broader European markets have reacted to scares out of Greece, with stocks down and bond yields higher in a number of the weaker Eurozone members. But that comes after weeks of almost uninterrupted rallying since the ECB opened the liquidity spigots).

Greece just about scraped enough money together for this month’s instalment on its debts to the IMF, and it also managed to roll over some short-term treasury bills earlier this week, but it owes another €747 million in May, and most analysts think that it won’t have enough funds to pay both that and pay pensions and public sector wages in full.

There’s plenty of potential for more bad news flow over the next couple of days, with the world’s finance ministers and central bank governors all gathered in Washington, D.C. for the spring meetings of the IMF and World Bank, a mediafest where the Fund’s measured, official pronouncements of doom and gloom are typically punctuated by wilder and more alarmist comments to journalists by the visiting dignitaries on the sidelines.

As we’ve noted before, defaulting on the IMF wouldn’t necessarily be the end of the world. The Fund’s mills grind just as slowly as the Lord’s, and nowhere near as surely. But no developed-market economy has ever done that yet, and Greece would be taking the brinkmanship that has been the trademark of its debt crisis into completely new territory.