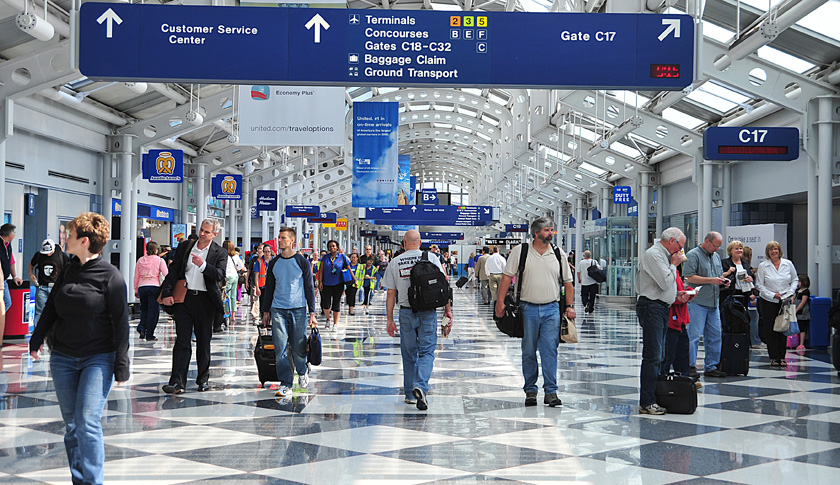 Most road warriors likely weren’t too surprised when Atlanta’s Hartsfield-Jackson International Airport recently retained its title of world’s busiest airport. With over 96 million people making their way through the facility’s terminals last year (a 1.9% increase), it’s a hub that’s hard to miss.

No other U.S. airport comes close (Los Angeles was the world’s fifth busiest – and nation’s second busiest- with more than 25.5 million fewer passengers). But any seasoned traveler will tell you it’s not the crowds that matter most when you’re on the road, it’s the threat of delays.

The Airports Council International – which put out the preliminary passenger traffic data – ranks airports in a variety of different ways. Passenger count gets the most headlines, but it also ranks them in terms of total number of take-offs and landings. (Chicago topped this list, narrowly beating Atlanta.)

These are the airports you’re most likely to connect through when you’re on the road. So we wondered: How likely is your travel to be disrupted as you go through these waypoints?

The numbers, which reflect delayed and canceled flights in 2014, are subject to the usual vagaries of air travel. Weather is often a factor – especially given an airport’s geographic location – and can change from year to year. And airline equipment issues are a wildcard as well. That said, travelers may still want to prepare for some extra time at certain airports.

Travellers walk down a concourse at Chicago's O'Hare International Airport in Chicago, Illinois on May 25, 2010.

If you're going to have a flight delayed or cancelled, it's likely here. More than 28% of all flights were delayed last year - with an average departure delay of nearly 59 minutes. Some 13,454 flights were cancelled (nearly 5% of the airport's total) - likely due in part to the brutal winter of 2014.

For an airport that moves that many people, Atlanta does a pretty good job of keeping the planes moving, posting the third-lowest percentage of delays: 19.5%. Delayed flights were on the ground an average extra 50.73 minutes. Just under 6,000 flights were cancelled, making up 1.62% of the airport's total traffic.

Travelers are stopped at a security check point at Los Angeles International Airport on November 23, 2011 in Los Angeles, California.

Los Angeles climbed from sixth to fifth among global passenger traffic last year. It did a fair job of facilitating that traffic, though, with a delay rate of 20.46% (and an average delay of roughly 53 minutes). Just 1.12% of the flights - some 2,493 - never made it off the ground.

You've got a decent chance of having some extra time to grab some Tex-Mex food if you're headed through DFW. Last year, 23.59% of flights were delayed for an average of 54.2 minutes. Cancellations were a bit higher than normal here at 2.45% - a total of 6,830.

Short of Chicago, there was no airport with more delays last year than Denver. 26.21% of the flights failed to take off on time, with an average delay of 54.47 minutes. Most did eventually take off, though. The cancellation rate was just 1.4%, with only 3,140 flights not making it into the air.

Flying into North Carolina's biggest airport? Give yourself a little cushion. Charlotte Douglas had the lowest percentage of delays on this list in 2014 at just 17.45%. The average delay was a fairly standard 54.12 minutes. Cancellations came in at 1.72% with 1,925 flights grounded.

United Airlines passengers at McCarran International Airport (LAS) now get to use Terminal 3 for arrivals and departures on November 20, 2012 in Las Vegas, Nevada.

Sin City's airport has a delay rate that's pretty much in line with the running average of the Top 10 terminals. 24.41% of all flights are late in taking off. (You'll wait an average of just over 52 minutes.) Odds are you'll get out, though. Just 0.81% of its flights (a total of 1,115) were cancelled last year.

As a primary hub for United, Houston's delay statistics are largely tied to a single carrier (just as Atlanta's are to Delta). Last year, 22.1% of its flights were late with an average delay of 56.19 minutes for those late flights. (United's delay rate at the airport was 24.14%.) 2.15% of all flights - some 3,744 - were cancelled.

A view of a new control tower that is under construction at San Francisco International Airport on March 13, 2015 in San Francisco, California.

The silhouettes of travelers are seen as a United Continental Holdings Inc. plane takes off from Phoenix Sky Harbor International Airport (PHX) in Phoenix, Arizona, U.S., on Friday, Sept. 6, 2013.

You may not get out of Phoenix quite as fast as you'd hope sometimes, but unless you're incredibly unlucky, you probably will make it home on the same day you'd planned. 20.71% of the flights were delayed last year for an average of 49.67 minutes. But just 0.7% of all flights were cancelled - a mere 1,136.