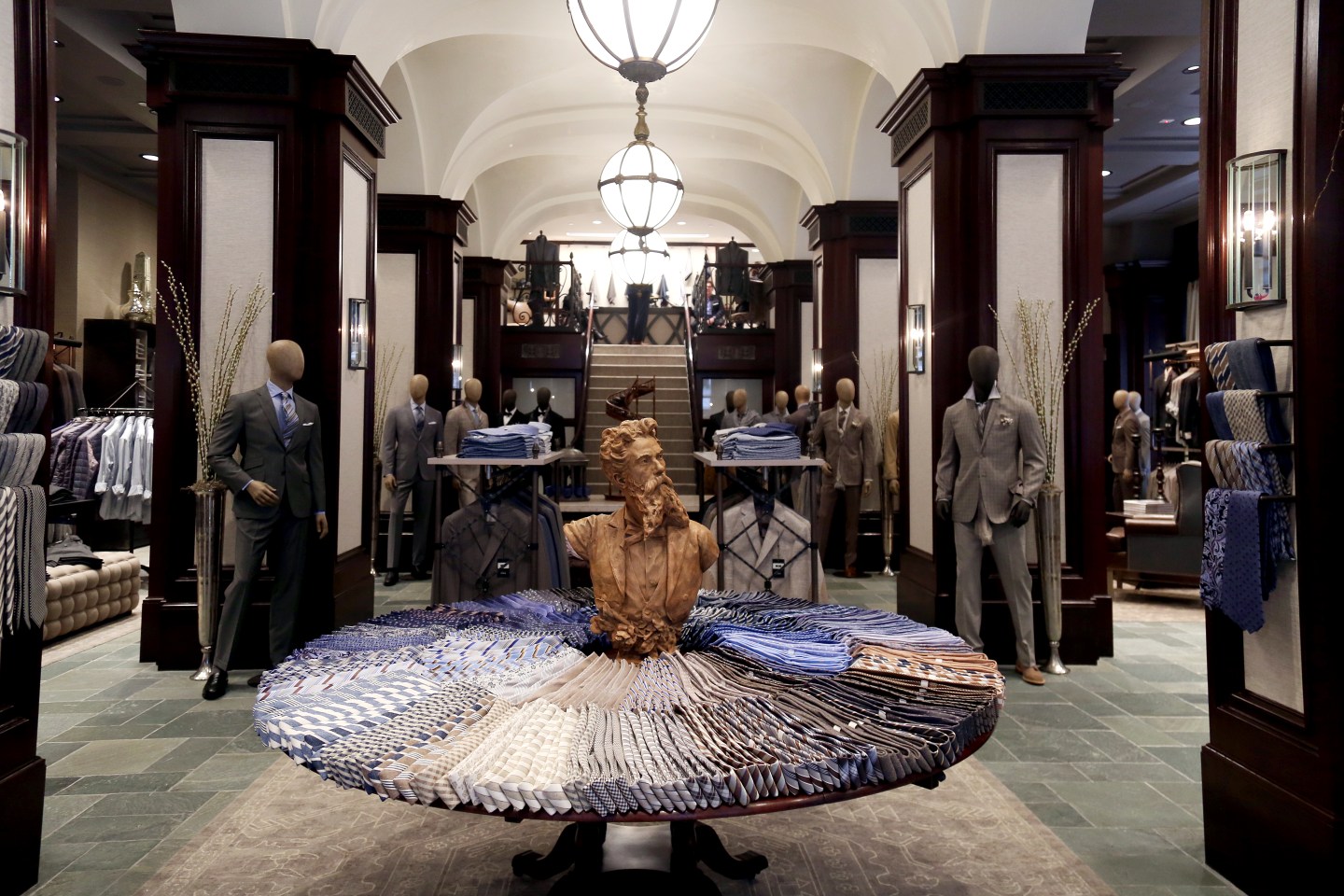 Nearly two years after Men’s Wearhouse (MW) bought the Joseph Abboud brand for a song, the company has opened the designer label’s first ever flagship store with a view to reviving the brand and tapping a more upscale part of the men’s suits market.

The Joseph Abboud store, on Manhattan’s upscale Madison Avenue, is a 4,300 square-foot emporium meant to evoke London’s Savile Row, with its elegant stores offering bespoke men’s suits. The store showcases Abboud’s entire collection, including clothes made with Italian fabric and linen suits. Some of the fancier touches include an iron staircase leading up to the part of the store men can order custom clothing, and hand-blown chandeliers.

While the average suit costs $290 at a Men’s Wearhouse store, and $225 at Jos. A. Bank, a rival retailer Men’s Wearhouse bought last year for $2 billion, the big push the company is giving the Joseph Abboud line is meant to give it a horse in the race of the $600-$800 suit in the aspirational luxury market. That part of the market is growing faster than the mid- and lower tiers, and is less exposed to the ups and downs of the job market.

“That’s where this brand is positioned, and why it adds so much to the company,” Chief Executive Doug Ewert told Fortune during a tour of the store. “Existing customers are trading up to it and new customers are coming to us now to get it, and so it brings a whole new demographic to our brands.”

Last year, the nearly dormant Joseph Abboud brand rang in sales of $230 million, but Ewert sees potential for the label to eventually be a billion-dollar brand, including international licenses, if Men’s Wearhouse executes its plan well. On top of already being available at 700 Men’s Wearhouse stores and 150 Moore’s stores in Canada, the Abboud brand will be debut at 600 Jos. A. Bank locations later this year, marking a major return of a brand that not so long ago was a fixture at chains as Nordstrom (JWN) and Dillard’s (DDS).

Men’s Wearhouse’s namesake stores saw comparable sales rise 3.9% last year, while at Jos. A. Bank they fell 2.5%. After years of a heavily promotional strategy, Jos. A. Bank in particular could use a bit of a high touch to rehabilitate any cachet it had. (Men’s Wearhouse and Jos. A. Bank will carry different elements of Abboud’s collections.)

The Abboud brand itself had lost some luster since its namesake designer parted ways with his JA Holding company a year after it was sold to private-equity firm J.W. Childs Associates for $73 million in 2004. Some flops included the JOE Joseph Abboud clothing, a sports line for young men, that Macy’s (M) dropped after three years in 2009.

In 2013, Abboud who had joined Men’s Wearhouse as chief creative director a year earlier, was reunited with his namesake brand, thanks to Men’s Wearhouse’s $97.5 million acquisition of the house he created. “We have now restored the DNA of the Joseph Abboud brand, by re-engaging him with it,” Ewert said. “It’s a designer brand with a living, breathing designer associated with it, designing the menswear- that’s unique out there, with the revolving doors you see at a lot of brands.”

Still, while the Joseph Abboud brand was wandering in the fashion desert, the competition hasn’t gotten any easier. The relaunched brand is going head to head with such popular lines as J.Crew’s hugely popular Ludlow collection, Hart Schaffner Marx and even German fashion brand Hugo Boss.

And that is major part of the rationale to open a flagship store on one of the most expensive retail strips in the world: to lend the brand an aura of elegance and luxury and restore some of that luster.

“This is to expand its brand recognition, awareness, and support the overall brand so it’s not seen as essentially a private label line at Men’s Wearhouse,” said Ewert. To further re-enforce that high-touch component, the company will be adding custom shirts later this year. The ability to offer custom clothing is also a key component of its strategy to reach younger men, many of whom associate Men’s Wearhouse with a previous generation.

“One of things we’re going to be able to do is to democratize the custom experience by bringing it to the middle market,” Ewert said. And hopefully for Ewert, get his traditional customer to trade up.