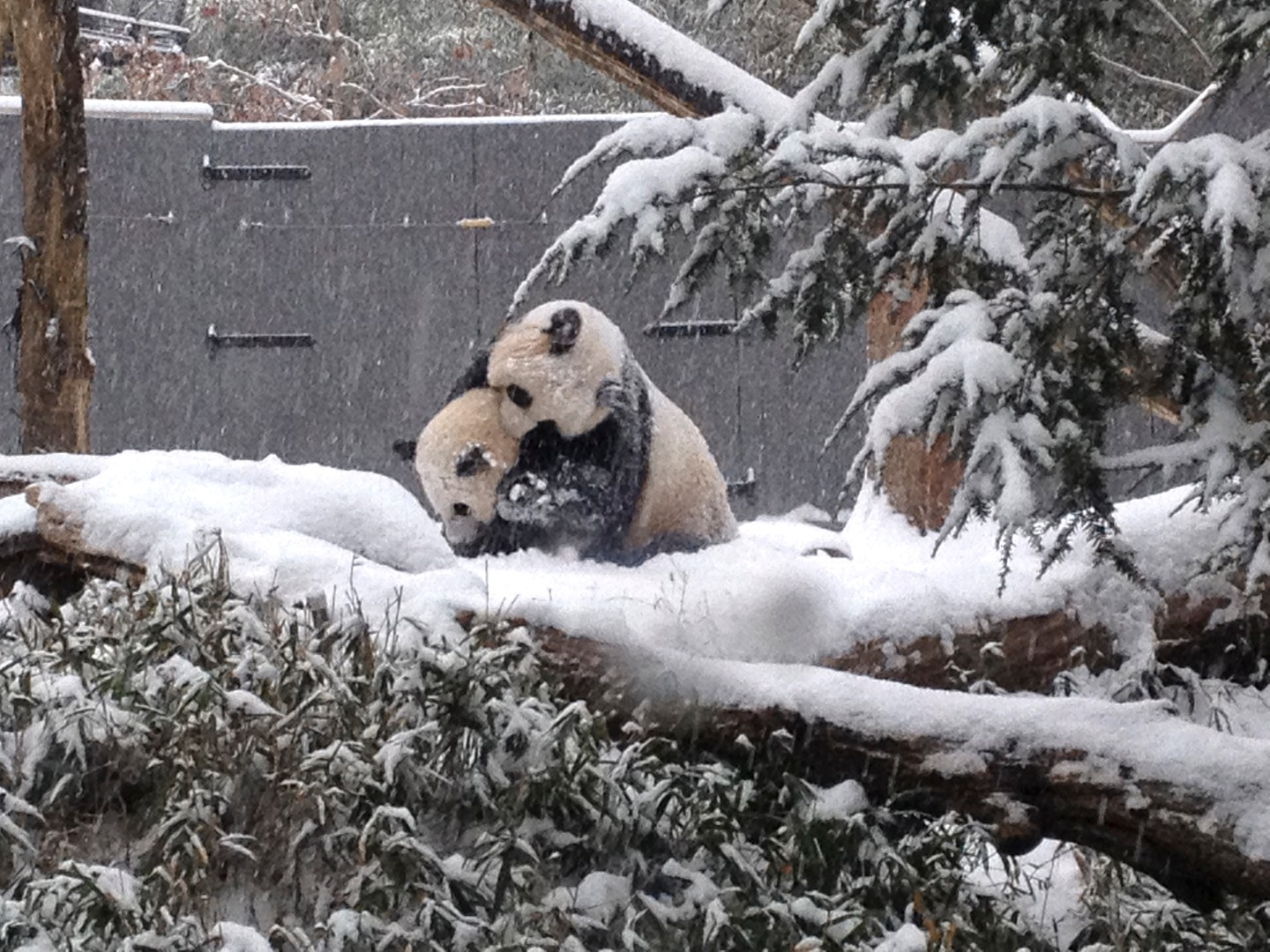 Sixteen-month-old Giant panda cub Bao Bao plays in the snow with her mother Mei Xiang at the Smithsonian's National Zoo as a winter storm hits Washington January 6, 2015. The storm was part of a bitter cold snap freezing most of the eastern half of the United States, driving the mercury below zero in the Midwest, with possible freezing temperatures as far south as Atlanta later this week, forecasters said. REUTERS/Devin Murphy/Smithsonian's National Zoo/Handout via Reuters (UNITED STATES) - RTR4KAF9
Photograph by Reuters

Low-wage workers have made a habit of hammering companies like McDonald’s and Walmart over erratic hours, the lack of full-time opportunities, and inadequate pay. Workers took a swipe at a somewhat different target on Thursday: the federal government.

Good Jobs Nation—a group created by the Change to Win federation that includes labor groups like the Service Employees International Union and Teamsters—filed a complaint with the Labor Department on behalf of a group of workers in and around Washington, D.C, that claims the workers are getting shortchanged on the pay guaranteed them by the Service Contract Act.

“These violations of the SCA are substantial, widespread, and persistent, and…have deprived the affected workers of over $1,578,700 in unpaid wages and benefits,” the complaint says.

The SCA sets wages for projects and services that the government funds. The pay rate is based on a region’s prevailing wages and benefits; the idea being that such standards will keep contract bidders from undercutting one another by reducing workers’ compensation.

The complaint filed Thursday claims that seven workers who serve as night janitors in the Department of Education headquarters in the Lyndon B. Johnson Building are due at least $11.83 per hour under the SCA since they work for a company that serves as a subcontractor for the DOE’s main cleaning company. Instead of $11.83, the workers—including the individual who cleans Education Secretary Arne Duncan’s personal office—are all making less than $10 per hour, with the lowest-paid worker earning $9.10. In total, all affected janitorial contract workers at the DOE are owned approximately $472,500, the complaint says..

“The wellbeing of every person who works in our buildings, whether or not they are employed directly by the U.S. Department of Education, is important to us,” DOE spokesperson Dorie Nolt told Fortune in a statement. She said that the General Services Administration manages the DOE’s headquarters facilities, including its janitorial and custodial contract and that it’s “working with the vendor to ensure that employee concerns are appropriately addressed in a timely manner.”

The complaint also claims that four groundskeepers at the Smithsonian National Zoological Gardens who collect trash and remove snow are currently paid between $9.50 and $9.80 per hour. They should be making $13.07 per hour under the SCA because their employer, Friends of National Zoo, is under contract with the Smithsonian Institute—museums and research centers administered by the federal government—according to the complaint. All told, the affected groundskeepers are owned at least $178,000.

The Zoo does not believe the Service Contract Act covers its agreement with Friends of the National Zoo, Annalisa Meyer, communications manager, said in a statement.

Sightseeing bus drivers who transport tourists to monuments on the National Mall and the National Cemetery in Arlington, Virginia, make up the third and final group of workers mentioned in the complaint. They should be taking home $20.85 per hour since their employer Open Top Sightseeing is a concessions contractor with the National Park Service, but in reality the workers cited in the complaint are making a few dollars per hour less than that. The back-wage tab for all affected drivers totals $928,000. The National Park Service did not immediately return a request for comment.

Good Jobs Nation’s larger demand is for the Obama administration to use its executive authority to change its policy to contract only with “model employers” that pay at least $15 per hour. “The federal contracting process favors the low-ball bidder,” says Paco Fabian, communications director at the Change to Win. But at the same time, he says, companies that win that process are also likely to “[pay] their employees minimum wage or less.”

The campaign’s big win came last year when President Barack Obama signed an executive order that set the minimum hourly wage for workers under federal contracts at $10.10 starting January 1. Ten of the 15 workers in the complaint filed Thursday don’t even make that.