Mazda vs. Subaru — is a reversal of fortune looming? 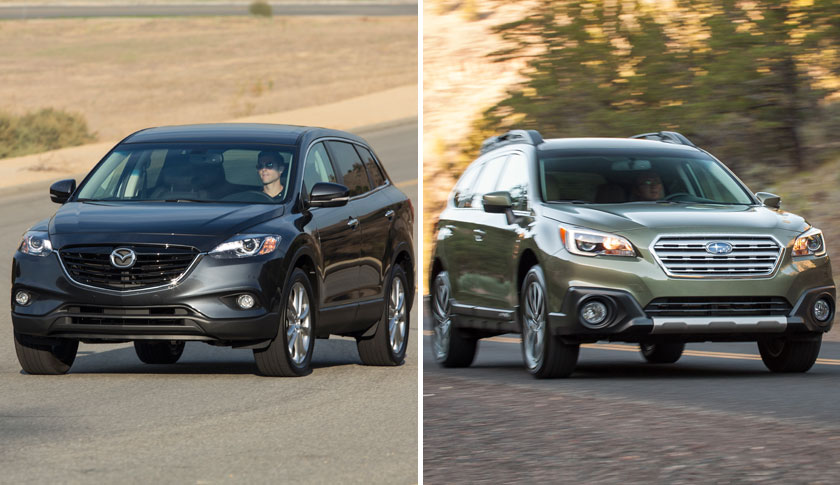 Bitter rivalries are a hallmark of the car business. Think Ford vs. Chevy, BMW vs. Mercedes-Benz, and Cadillac vs. Lincoln. Battles are fought over tenths of market share. But the one that industry observers will be studying for years is the tectonic shift that has characterized Mazda vs. Subaru.

Go back to 1991. Mazda was still riding the crest of the Miata’s popularity and sold 343,612 cars. Subaru was barely a blot on the horizon, one-third the size of Mazda. The first Outback was still four years away and only 105,052 Subies found owners.

As recently as 2008, Mazda was still outselling Subaru, but by a much narrower margin, and its run had come to an end. While Subaru kicked it up a gear, Mazda idled in neutral. Last year, Subaru capped its sixth year of record sales by trouncing Mazda by more than 200,000 vehicles, 513,693 to 305,801.

How did this happen? And is there any chance the two companies could reverse positions again?

From the outside, Subaru and Mazda look similar. Both are independent Japanese automakers on the smallish side. Both have legacy ties to industry giants: Subaru with Toyota and Mazda with Ford. And both have followed similar U.S. marketing strategies: find a niche and keep exploiting it. Mazda went after enthusiasts who liked its zoom-zoom image, while Subaru doubled down on ultra-practical all-wheel drive.

From appearances, Mazda got distracted by the sunny weather at its Southern California headquarters and competition from much larger neighbors like Toyota and Nissan. Subaru, which operated out of a featureless Philadelphia suburb, suffered no such distraction. Its workaday culture reflected the dogged persistence of its president, a former accountant.

“Mazda has been struggling with its identify in the US, having created a large line-up that seems to aspire to the mainstream rather than being a unique, niche brand,” says Jessica Caldwell, senior analyst for Edmunds.com. “Subaru, on the other hand, has become slightly more mainstream but with vehicles that are still unapologetically Subaru.”

Success had come quickly to Mazda after the introduction of the Miata (now known as the MX-5) in 1989, and sales reached 375,416 in 1994. But, as Caldwell points out, Miata sales tailed off like all special-purpose cars and Mazda sales flattened for nearly two decades. On the other hand, nothing came easily to Subaru, which resorted to unorthodox tactics—driving cars up a ski jump in the snow, marketing to lesbians— to sell its line of homely, if sturdy, wagons and crossovers.

Other factors were also at work. Mazda’s divorce from partner Ford in 2010 deprived it of the critical economies of scale, research into new technologies, and relationships with suppliers. Subaru, meanwhile, has found itself in front of the booming customer demand for compact and mid-size crossovers with Forester and Outback.

Today, Mazda is still working to gain traction. To lower labor costs, it is building the Mazda2 and Mazda3 at a new plant in Mexico and is looking at adding more models. It showed a new compact crossover at the New York auto show in March, but its appearance was overshadowed by the all-new fourth generation MX-5. 2015 sales are flat through March compared to a year ago.
[fortune-brightcove videoid=4138256775001]

For its part, Subaru is telling its dealers that it expects to lift sales five percent to 540,000 units in 2015. Through March, they are up 17%, despite being held back by factory constraints.