As Shell swallows BG, here are 5 other huge energy deals 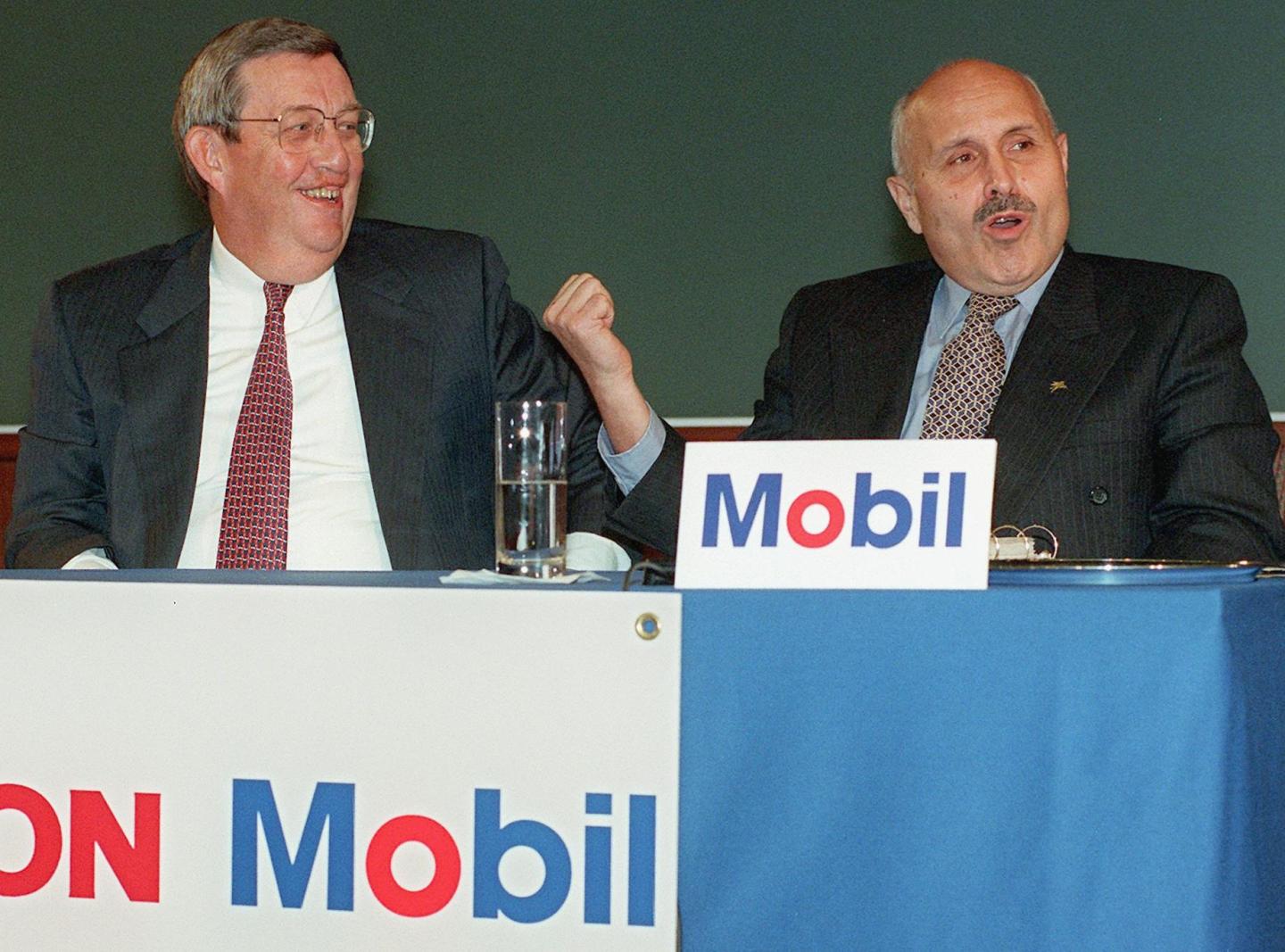 NEW YORK, UNITED STATES: Lucio Noto (R), chairman of the board and chief executive officer of the Mobil Corporation, answers the question about how he and Lee Raymond (L), chairman and chief executive officer of the Exxon Corporation, decided to merge their two oil companies, at a news conference in New York 01 December. Raymond will be the chairman, chief executive officer and president of the new Exxon-Mobil Corporation and Noto will join the Exxon-Mobil board of directors as vice chairman. Raymond said the merger will cost two billion dollars and lead to the elimination of 9,000 jobs worldwide. The merger, if approved, will be the largest in US history. AFP PHOTOS Henny Ray ABRAMS (Photo credit should read HENNY RAY ABRAMS/AFP/Getty Images)
Photograph by Henny Ray Abrams — AFP/Getty Images

Royal Dutch Shell has agreed to take over BG Group in a $70 billion deal that is the largest energy deal in a decade, and the third largest ever by enterprise value.

The move signals continued consolidation in the oil and gas industry (look to the beer business to see the same process happening) and will bring Shell closer to the industry’s top dog, ExxonMobil (XOM). Today’s news is a major moment for the industry and perhaps a sign of similar deals to come. It makes Shell the largest producer of liquefied natural gas (LNG) in the world, and brings BG’s valuable Brazil assets into Shell’s portfolio, which is part of why Shell paid such a premium (more than 50%) on BG’s shares, which had fallen more than 50% since January 2014.

Here are five other mega-deals in the energy industry, dating back to 1984.

Just this past November, Halliburton (HAL) announced it would acquire Baker Hughes (BHI) for $34.6 billion in one of the first big deals sparked by the plunging price of oil. By buying BHI, Halliburton gets closer to Schlumberger, the leader in oilfield services. This deal is in fact still clearing — on Tuesday, Halliburton said it will sell off three business units — directional drilling, logging while drilling/measurement while drilling, and fixed cutter bits/roller cone drill bits — in three separate deals in an effort to get antitrust regulators to approve the acquisition.

In August of last year, Kinder Morgan (KMI) announced a $70 billion reorganization, consolidating its many disparate parts assets into a single corporate entity. That series of small transactions added up to the second largest energy deal in history at the time, according to Bloomberg data. The combined company, a $44 billion giant, took on around $27 billion in debt held by individual partnerships, according to our story at the time.
[fortune-brightcove videoid=4069581177001]

At the turn of the century, Chevron (CVX) purchased rival Texaco for a reported $45 billion, forming the ChevronTexaco Corporation, now the second largest U.S. energy company, with a monster market cap of $97 billion. “Our goal is to be No. 1 in total stockholder return among our industry competitors,” said CEO Dave O’Reilly when the deal was announced. The merger, he said, “puts us on the path to our goal.”

While ChevronTexaco is a name that consumers may still be getting used to, ExxonMobil has long become commonplace. But when Exxon and Mobil merged in 1998, in a deal worth $81 billion, it shook the industry and was held up for nearly a year with antitrust regulation issues. The companies had to tell off some 2,400 gas stations in the U.S. to appease the FTC, and the deal finally went through. It remains the largest energy transaction in history, though today’s $70 billion buyout is close.

Before ChevronTexaco, and even before Chevron, the company was called Socal (Standard Oil Co. of California). In 1984 Socal made a $13.3 billion bid for Gulf, then the fifth-largest petroleum company in the U.S. It was the industry’s biggest-ever corporate merger at the time. The new company changed its name to Chevron, and the rest is history, as today it is no. 2 in the overall industry.
[fortune-brightcove videoid=4109734411001]