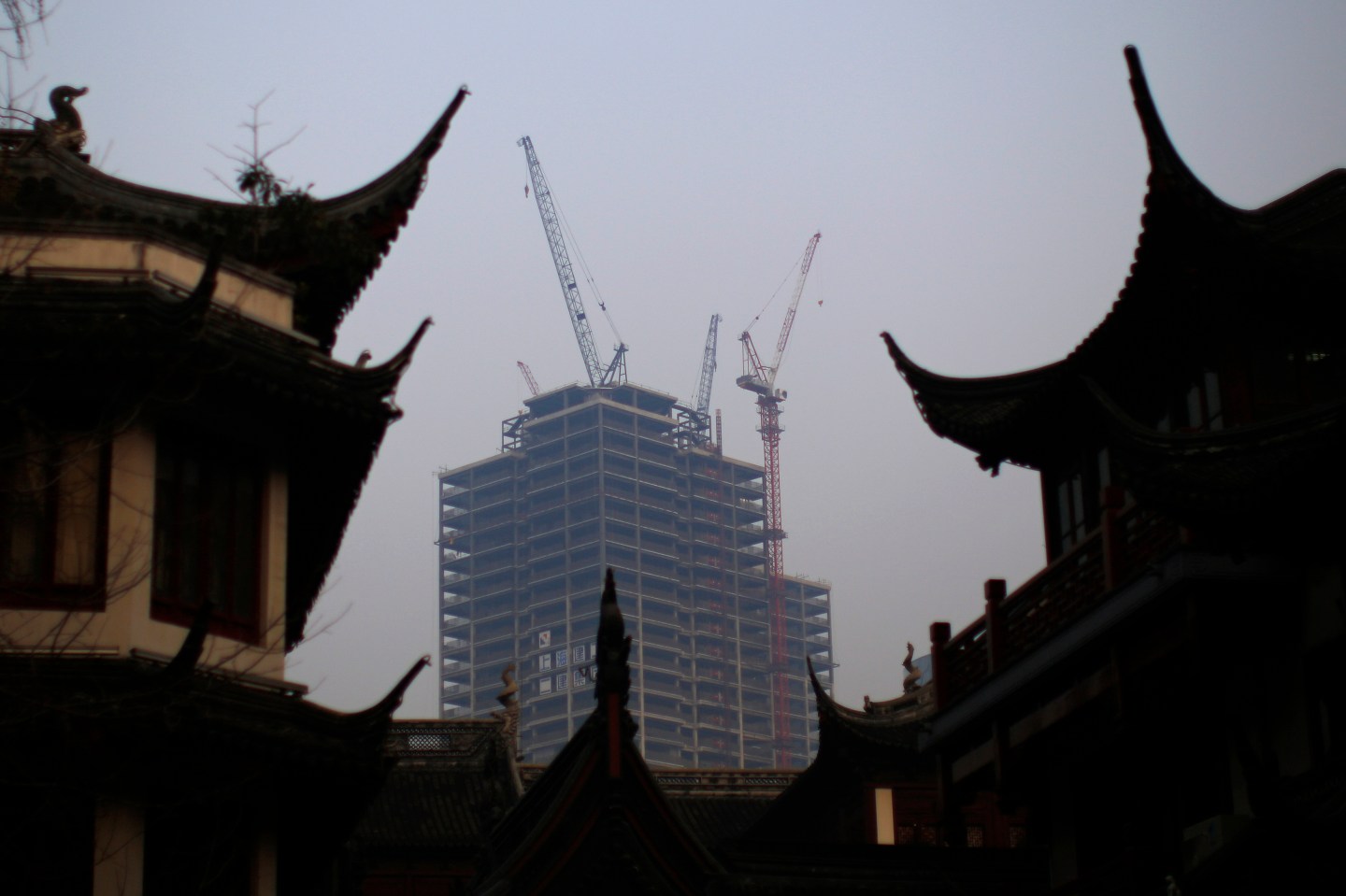 A building under construction is seen near the traditional Yu Yuan Garden in downtown Shanghai, February 12, 2015. China's new home prices may have bottomed and even started to rebound in January after eight months of decline, industry surveys showed, fuelling hopes that official data due on Tuesday will confirm a recovery in the massive property market. REUTERS/Carlos Barria (CHINA - Tags: BUSINESS CONSTRUCTION) - RTR4PA4M
Photograph by Carlos Barria — Reuters

China is a place of contradictions and nuances. Here’s but one: China is the world’s second-largest economy, as we often hear, but the average Chinese worker earns about as much during the year as someone from the Dominican Republic.

The country is hard enough to understand without book publishers trying to exploit our fear and excitement about the Middle Kingdom with bombastic titles like China’s Crash Is Coming, Why China Will Rule The Next Century, and Your Baby Is Really Chinese. (OK, that last one isn’t out—yet.)

Sometimes a masterpiece will reach the bestseller list; former New Yorker correspondent Peter Hessler’s three books about his experiences over 11 years living in China are cases in point. But oftentimes, readers ready to embrace China’s complexities are left to pick through a selection of titles that don’t do justice to a country that just 50 years ago saw millions of its citizens die of hunger—and today is widely recognized as an inevitable superpower.

I moved to China in 2013 with almost no language skills and only a Trivial Pursuit-level understanding of China’s history. But I did have book recommendations—an iPad full of them. I can’t image how much more clueless I’d have been without them.

Some of those are included here. Others on my list are titles I’ve stumbled upon after living in Beijing, surrounded by Sinophiles, foreign students, and regular Chinese who get excited whenever they encounter a book that captures some of the truth of the place.

I’m shying away from tomes that make grand pronouncements about China’s future because, again, China is filled with too many contradictions. Whenever I walk down a Beijing alley, my mind flutters between thinking this country is about to regain its place atop world powers because of sheer scale—1.4 billion people, tens of millions more farmers about to move into cities—and believing the nation’s inequality, choking pollution and diplomatic insecurity might doom its rise.

Casual readers about China are lucky in one sense: The complexity of the place has attracted some of the world’s best storytellers. They are drawn here for all kinds of reasons, but China’s 5,000-year history, unique culture, and crazy characters provide material most writers could only dream of.

So what follows are 10 books by writers who allow a story to unfold—who spend time showing the reader the parts of China we don’t know, instead of telling us about them—as they explain modern China to outsiders.

You might as well pick up all three of Hessler’s books on China, which are elegantly written, hilariously funny, and deeply insightful. The third, Country Driving, provides an on-the-ground account of the rapid industrialization in China that foreigners often read about but rarely see. (A bra-parts factory producing thin-steel rings for straps—and only those rings—is one of the memorable businesses.) As the title suggests, the book is partly a study of China’s new driving culture—it might be worth the Amazon price alone for an extended version of Hessler’s story about earning his Chinese driver’s license—but it also illustrates how industries across the country, far away from the glitzy skylines of Shanghai, Beijing and Guangzhou, continue transforming China with consequences both positive (new-found wealth) and negative (a carelessness about pollution).

I know two people who loved this book: One was an experienced China hand who has worked in and out of the country for three decades; the other knew almost nothing about the country. The universal appeal has something to do with Osnos’s engaging writing, but even more with the characters he finds. They represent the spectrum of what a citizen of modern China faces: overnight success, optimism, insecurity, fear, and hope. Osnos, another former New Yorker correspondent, includes known figures like artist and activist Ai Weiwei, whom he befriended in Beijing, and former World Bank chief economist Justin Lin, who defected to mainland China from Taiwan in 1979, as well a striving Chinese English student named Michael Zhang. He pulls back to describe the historical events that inspired characters living in what he calls China’s Gilded Age.

China will be a country that builds things for a long time. Chang’s intimate portrait of life on the factory floor (and the factory dorm, and eatery, and hospital, and karaoke hall) depicts what tens of millions of Chinese are going through to reach the middle class. The trend on which Chang focuses—a migrant class numbering 130 million in China, what she calls the largest human migration in history— is likely to remain part of the country’s growth story for years to come. Migrant women in China are particularly interesting because unlike men, who are obliged to care for their aging parents, women experience freedom and liberation once they escape their farming villages. Chang weaves together stories of the grueling work schedules—8 a.m. to midnight, seven days a week—with the more painful reality of being one of 7 million migrants in a city. When they meet each other for the first time, Chang’s factory girls ask only two questions: “How old are you? How much do you make?” Chang’s writing is crisp and funny, and the core of her book leaves readers with a sense of what the tens of millions of future middle-class females in China are really like.

Written by one of China’s most famous novelists, this nonfiction book is a fascinating primer on the big themes in today’s China—the propensity to copy ideas and products, screaming economic disparity—woven together with the writer’s personal experiences during the Cultural Revolution that ripped China’s society apart during the 1960s and ’70s. When Yu was a young boy, he writes, “Although there was no shortage of violence during the Cultural Revolution, small-town life was basically very dull and confining. So whenever an execution took place, the little town on Hanzhou Bay where I grew up would buzz with excitement.”

There’s no better primer on China, in both its flawed modern-self and its recent history, than this. Yu Hua has an insider’s take on the pollution and industrial copying that Westerns often read about, but he also describes the hell average Chinese have confronted during their lifetimes. The book also comes recommended by another author on this list, Osnos, who has said he wished he had written it.

The most common greeting in China today remains, Chi le ma? “Have you eaten?” It dates back to an era of intense poverty in China—or more directly, to the years 1958-1962, when Dikötter estimates 45 million Chinese died in what he calls the greatest man-made famine in history. Mao Zedong, the father of Communist China, organized the Great Leap Forward with the goal of catching China up to industrial Britain in 15 years and, eventually, the United States. Local governments pulled farmers away from agriculture to produce iron and steel in backyard furnaces, leading to grain shortages, and the central government’s unrealistic grain production quotas exacerbated shortages when local governments sent much-needed grain to the cities and boasted to their superiors of surpluses when there weren’t any. The Communist Party has kept the period off-limits to public discussion, but the famine left an everlasting impression on today’s Chinese, much as the Great Depression shaped a generation in the U.S. Dikötter’s research and writing on the topic are among the best.

The Communist Party is ubiquitous in China, but it’s often hard to see from the West behind the veneer of publicly listed companies, Shanghai skyscrapers, and record-setting IPOs. In amazing detail McGregor pulls back the curtain on the CCP to describe the party’s influence on all levels of Chinese life. Nothing better has been written about inner workings of the CCP: You can’t talk about China without the party, and McGregor’s reporting reveals just how powerful it is.

French’s book shows what it looks like when China goes global in the 21st century. More than one million Chinese have emigrated to Africa over the past couple of decades. While large infrastructure projects by Chinese builders are scattered across Africa, so too are tiny businesses run by Chinese entrepreneurs who’ve left their crowded homeland. Some of the migrants stayed behind after construction projects were completed; others left China without looking back. One character talks of creating a new race the day his Chinese sons marry African women.

Today’s China is preparing itself for global influence—the new Asia Infrastructure Investment Bank is but one example— and in Africa it has shown some of its character. Chinese projects have provided much-needed infrastructure in poor countries, but have also given Chinese companies access to Africa’s rich resources in oil, wood, and metals on very favorable terms. French details all this with insightful perceptive: the former New York Times reporter previously worked in both Africa and China.

The Pulitzer Prize winner writes about the difficulties regular Chinese face petitioning for redress through the country’s legal system. It’s a topic particularly relevant today: One of the hallmark reforms promised by China’s current leadership is a strengthening of the rule of law. The three vignettes Johnson includes in the book, however, can make a reader skeptical about China’s prospects for reform as long as the country is under one-party rule. His first character is a peasant lawyer who fights local governments on behalf of farmers who’ve been illegally taxed. Johnson goes on to chronicle the lives of Beijing locals who lose their homes to development and a persecuted Falun Gong grandmother. A review of the book in the New York Times concluded, ”The push for change comes mostly from people we rarely hear of.” Johnson’s is a compelling look into the obstacles those people face in modern China.

It’s impossible to understand a place without understanding its marginalized underclass. The topic is one China’s propagandists, promoting the country’s growing economic prosperity, would rather not highlight. But the poet and writer Liao, who has been jailed and beaten for criticizing China’s ruling party, visits prisons, tiny villages and slums to tell the stories of a forgotten class. His subjects include a grave robber, a professional mourner, and a particularly memorable megalomaniac peasant from Sichuan province who anointed himself the new emperor of China before ending up behind bars. Unsurprisingly, this book is banned in China. But Liao shows that modern China is much more interesting than the propagandists let on.

McGregor’s book about how to do business in China isn’t your standard business title. The man who built Wall Street Journal owner Dow Jones’s operations in China starting in 1994 before Dow Jones was bought by Rupert Murdoch’s News Corp.) tells of his experiences and others’ negotiating with Chinese partners, working with local governments, and navigating endemic corruption. He’s funny, direct and pithy and offers advice that sounds like a corporate version of Mao’s Little Red Book. In the first pages, McGregor tells the story of flying to a coastal city in China. He’s shocked when his plane abruptly pulls up moments before touching down. Only when it circles back and he hears the landing gear engaging for the first time does McGregor realize what the pilots forgot to do the first time. It’s a nice metaphor for how far China has come and how far it still has to go.