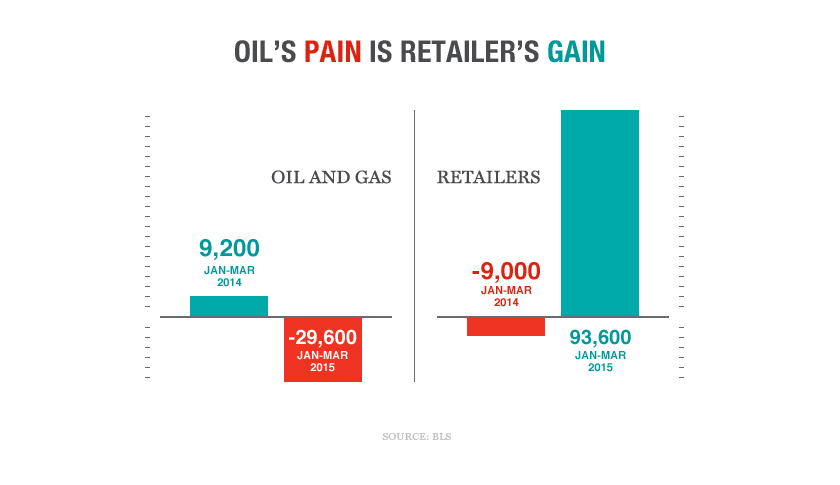 If the economy is slipping, it’s not because of oil.

On Friday, the Labor Department reported that employers added 126,000 workers to their payrolls in March. That was the worst jobs gain since December 2013, and it was significantly less than economists were expecting for the month. After a string of very good jobs reports that seemed to indicate the economy was growing as fast as it has in over a decade, March’s jobs report was a letdown.

But some economists have said that we shouldn’t be all that surprised by the bad number, or even concerned. Why is that? The black mark on the labor market, they argue, was really on account of troubles in one sector: oil. And it was to be expected. Crude prices have plunged over the past six months. Lower oil prices means less fracking and drilling in America, which we have been doing more of, and thus fewer jobs.

But here’s the thing: While there are several likely reasons employers hired fewer workers than expected in March—the weak global economy, a strong dollar, fears about rising interest rates, or even the weather—oil is not one of them, or at least not the primary reason.

In March, employers hired 119,000 fewer employees than expected. But job losses in oil and gas accounted for less than 10% of that miss, or just 11,000 jobs. In other words, 90% of the missing jobs were in other industries, like janitorial services, which had 9,200 fewer people employed last month.

Still, it’s not just about the jobs lost. The disappointing jobs report also includes the people that weren’t hired as well. While the oil industry accounts for less than 1% of the overall workforce, the sector maters more than it used to because that’s where the job growth has been coming from.

What’s more, the jobs we have lost in the oil sector have been made up within other parts of the economy, like in retail, where lower gas prices gives consumers more money to spend elsewhere. Retailers added 93,600 workers to their payrolls in the first three months of the year. In the first three months of last year, retail employment dropped by 9,000 workers. That’s a 102,600 net gain, versus oil’s 40,000 loss.

So what’s going on? The March jobs numbers confirm what some economists have been arguing for a while now: for whatever reason, the economy, all of a sudden, is slowing. It’s not just oil. Hopefully, the Federal Reserve is watching.