Change.org President: 5 leadership lessons from my days as a coxswain 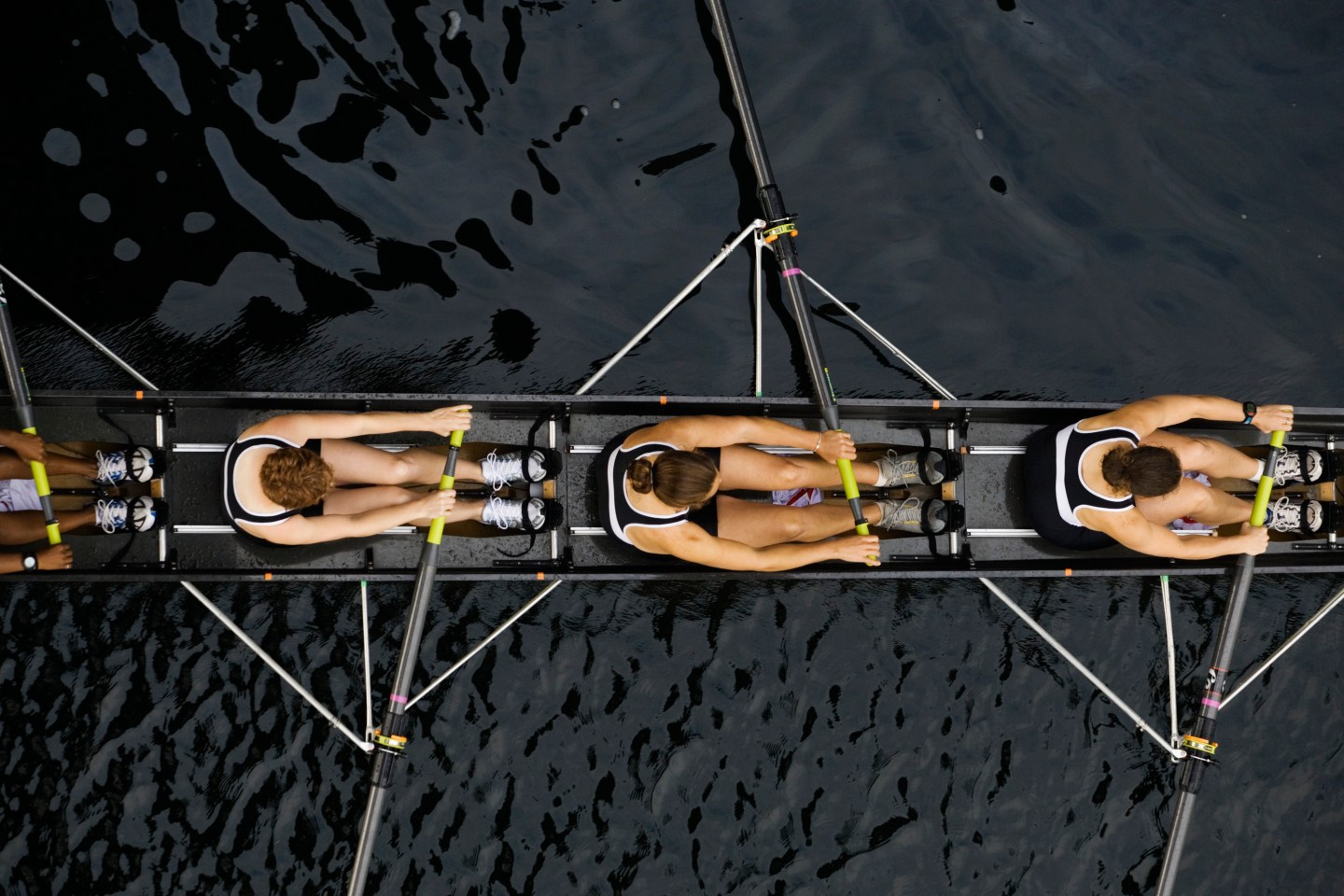 I recently learned I have something in common with Stephen Hawking, Anderson Cooper and Bram Stoker. Yes, really.

As it turns out, we were all coxswains on a rowing team.

There is a reason why rowing is frequently used as a metaphor in business, and why “motivational” posters often depict images of rowing – these images capture the pinnacle of teamwork: a group of people coming together in perfect synchronicity, pushing themselves toward victory.

But before victory, or even perfect teamwork, comes a lot of hard work. As a coxswain for men’s and women’s rowing teams, I learned lifelong lessons about leadership and bringing teams together.

Since many people are not familiar with the term or the role (or believe it is a person that sits in a boat yelling “stroke”), for the sake of clarity, I’ll start with a definition: the coxswain is responsible for the direction and speed of the boat, as well as improving technique during practice, and motivating the crew in a race setting.

Great coxswains are part visionary, part strategist, part coach and part cheerleader – all the things I strive to be as a leader. In fact, most of the leadership skills I use today, I learned during my years as a coxswain in high school and college. Those lessons are as relevant now as they were then, and apply to anyone, even those who know nothing about rowing.

Here are my 5 leadership lessons from my time as a coxswain:

Coxswains need to be able to motivate a crew to push themselves beyond the limits they think they can reach, and during times when they are already in pain. This takes trust and respect – and it doesn’t come automatically just because you have a microphone.

To earn the team’s respect, I needed to prove I was willing to work hard too – to get in the trenches with them and feel their pain. Nearly every workout we did out of the boat, I did with them. Every hard run up sand dunes, every set climbing the stairs in the stadium, and every ice-cold run in snowy Ithaca, I did alongside my team. I earned their respect in those moments, and then when we were in the boat, they trusted me to have their best interests in mind, and to understand how they were feeling.

This principle still holds true today. When I ask my team to work late trying to reach an important goal or ship a product on time, I make sure I’m there with them – in the office or online – making it clear we’re in this together.

You can’t win without real-time feedback

A boat moves fastest when each oar is hitting the water at exactly the same angle and at exactly the same time. That meant that if someone in the boat was too slow, or too fast, or their oar was at the wrong angle, I had to tell them, and I had to tell them right away. In a 1,500 or 2,000-meter race, every second matters. There was no way to win the race without giving the feedback and making the correction in real time.

Many leaders forget this (and I am sometimes guilty of it myself) because giving real-time feedback can be difficult, especially if you don’t know how someone will react. But if your goal as a leader is to help each person perform at his or her best, and to have the team perform at its best, timely feedback is essential.

As a coxswain, I had to give this feedback publicly – in front of the other members of the team while we were in the boat. At work, you can make this type of feedback private after a meeting in which you observe the behavior, or even in a regular one-on-one meeting. The key is to give it quickly – the longer you wait to give the feedback, the less impact it will have on the outcome you are aiming to achieve.

A team is made up of individual people

While it was important for me to find ways to motivate the whole crew, I also had to understand how to motivate each individual rower.

The way I determined what worked best with each rower was to coach each person individually on the rowing machine, trying different techniques to test what made the difference between a good time and a great time for each person. For some it was encouraging feedback, such as saying, ‘I know you can do this,’ and for others it was competitive feedback, such as, ‘Don’t let so and so beat your time.’

Different motivators worked for different people, and finding out what drove them as individual rowers helped me learn how to push them each in unique ways while we were in the boat, leading to better results and more wins as a team.

This is true at work as well, and I now use a tool called the “motivational pie chart” to understand the factors that drive each member of the team. More about this tool and how to use it here.

You can only take so many Power 10’s

There is a technique in rowing called a “Power 10,” where rowers in a boat will take 10 strokes in a row at their absolute maximum power. They are already meant to be rowing at an intense pace, and these 10 strokes are meant to lift that intensity even higher, usually to try to move past another boat in a race when it’s really close.

The coxswain decides when in a race to call these Power 10’s and how many to call during a given race. What you find, after coxing for years, is that two or three is the maximum number of Power 10’s a team can take during one race – too many and they stop being effective because the team gets too tired, too few and another team may overtake you with their own Power 10.

We use the concept of the Power 10 at Change.org to talk about the “sprints” we do as a team, trying to reach a particular deadline or hit a particular goal. We want to be able to pull together as a team in those critical moments, and we want to use them sparingly so as not to exhaust the team when we really need to step up. The key is to strengthen our ability to execute as a team on an ongoing basis, so we don’t need to do too many Power 10’s, and thus can choose them wisely.

It helps to take one for the team

If you looked at the Urban Dictionary definition of what it means to be a coxswain, it suggests that, “upon winning a race, the coxswain is thrown into the (often very dirty) water.” This is, unfortunately, also true.

In the same way American football players throw Gatorade on their coach after the Superbowl, rowers throw their coxswains in the water after a win. I am proud to say I have been thrown into many of the dirtiest lakes and rivers on the east and west coasts of the United States.

In the ultimate act of trust, rowers do not see where they are going – they trust their coxswain to steer them, encourage them, and make them better. And in return for this trust, and their extremely hard work, they ask the coxswain to “take one for the team.” Throwing the coxswain in the water provides an outlet for celebration and release.

It’s the same at work. There are many times I volunteer for things that allow my team to celebrate and have fun, sometimes at my expense. Recently, the team got to vote on which Halloween costume I would wear during our global all-team call: I ended up in a purple unicorn onesie, complete with one-horned headdress. Fun!

Finally, no leader exists in a vacuum without mentors and colleagues who push us to be better. I would not have learned any of these valuable lessons if it were not for my coaches and teammates. Here’s to learning everything we can from the people and experiences around us, and periodically being willing to get thrown in a lake.

Jennifer Dulski is President and COO of Change.org.