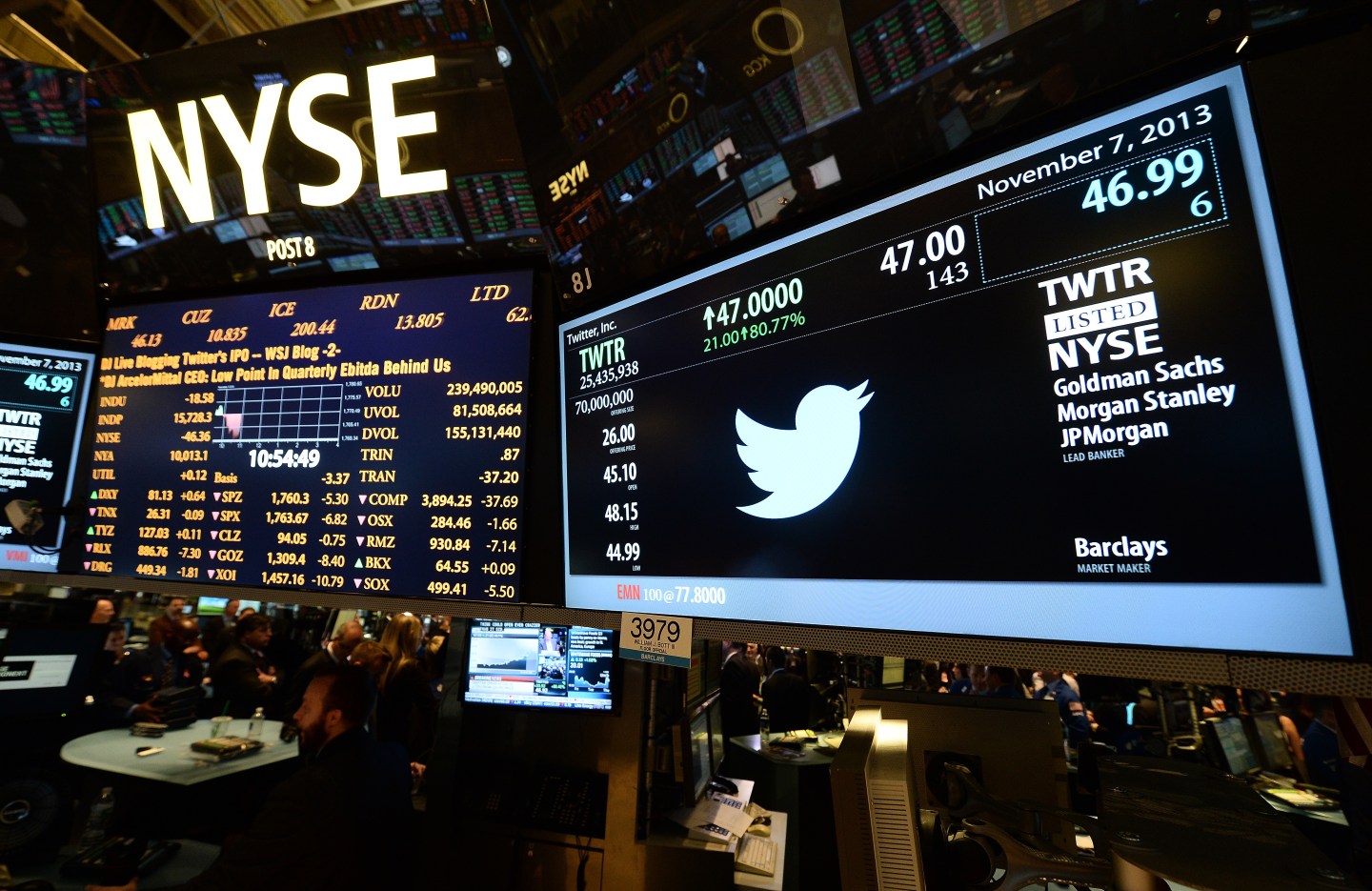 A screen displays a Twitter and share price logo as it starts trading at the New York Stock Exchange (NYSE) on November 7, 2013 in New York. Twitter hit Wall Street with a bang on Thursday, as an investor frenzy quickly sent shares surging after the public share offering for the fast-growing social network. In the first exchanges, Twitter vaulted 80.7 percent to $47, a day after the initial public offering (IPO) at $26 per share. While some analysts cautioned about the fast-changing nature of social media, the debut led to a stampede for Twitter shares. AFP PHOTO/EMMANUEL DUNAND (Photo credit should read EMMANUEL DUNAND/AFP/Getty Images)
Photograph by Emmanuel Dunand — AFP/Getty Images

Update, 5/7/2015: On April 6, Reuters reported that, according to its data, a tweet about a potential deal between Intel and Altera appears not to have been the impetus for timely options trades that netted $2.4 million in 28 minutes. That tweet, sent by a Wall Street Journal reporter, came 19 seconds after the trades occurred. Intel and Altera have reportedly since called off any talks, and no deal appears to be in the works. Fortune’s story has been updated to reflect these facts.

A few years ago, a London hedge fund created something that quickly became known as the Twitter fund. A computer system it operated “read” 100 million tweets a week and determined whether they reflected a positive or negative outlook on the world.

If the sentiment was positive, the fund would buy stocks. If it was negative, it would place a bet that stocks would go down.

It was a horrible idea. The fund crashed and burned within two years.

But here’s perhaps what the fund should have done: On Friday an options trader made more than $2.4 million based on a single news wire in just 28 minutes. Nice work if you can get it, which you probably can’t.

The trade had to do with reports that Intel (INTC) is in talks to buy Altera (ALTR). News of the merger discussions between the two chipmakers surfaced on Dow Jones Newswires on Friday afternoon, but no deal has been officially announced. Nonetheless, one second after the news hit, a trader bought options for around 300,000 shares of Altera. The options had a strike price of $36, and the stock at the time traded for $34. So they were so-called out of the money options, because anyone exercising them would end up having to pay $36 for a $34 stock. And the options were set to expire in mid-April. They didn’t cost very much, around $0.35 each, or around $110,000 for whole trade.

Less than 20 seconds later, Altera’s stock was halted on the Intel merger news, according to data from Nasdaq. Two seconds after that, a Wall Street Journal reporter tweeted the news, according to Dow Jones. When the stock reopened at around 3:40, the shares had jumped 28%. The stock closed at nearly $44.50. That meant the options that had been bought for $0.35 were now worth nearly $8.50, or collectively just over $2.4 million more that they were 28 minutes before.

Intel is in talks to buy Altera. Deal would be largest in Intel's history. Scoop w/ @danacimilluca coming to http://t.co/Q7kOQBB8Zh $ALTR

Options traders say they see shady trades all the time. And the Securities and Exchange Commission regularly investigates questionable trades, and does sometimes bring insider trading cases against the investors behind them.

Experts say a swift fingered options trader could have executed a trade in nearly a minute, but there was some skepticism in an options trader chat room as to whether that was possible. A much better explanation: The trade was done by a computer. A few years ago, high-frequency trading was relatively rare in options markets. But today, traders say it is increasingly common.

And perhaps it’s not all that surprising a computer would be able to pick up something like a news wire hit or a tweet tipping readers off about the potential deal.

But it’s also true that most investors don’t have access to a high-frequency trading computer that could make a 300,000 share options trade in less than a minute. So isn’t it just as unfair to allow high frequency trading, in at least this instance, as well?

Jim Strugger, a derivatives strategist at MKM Partners, says that’s a silly argument. Insider trading is illegal and high-frequency trading is not. High-frequency trading could be an issue, Strugger says, when it is based on market data that only investment firms have access to, or access to first. Insider trading, too, is about access to private information. But when a trade is based on public information, or something said on Twitter, then it should be fair game. (Strugger’s firm, by the way, is not a high-frequency trader. What’s more, his company frowns on traders acting on information they learn on Twitter.)

Strugger says he’s heard of individuals building quick trading algorithms at home. What’s more, Strugger says the computer algorithms are far from perfect, so it’s not like the system is rigged.

“I get pitched all the time from people who want to sell us computers systems that can make quick trades on tweets or news about potential deals, but I turn them down,” says Strugger. “For every deal they get right, there are ten they get wrong.”