Exclusive Interview: The two men and their strange ideas behind the Mercedes Self-Driving F 015, a “future mobility lounge” 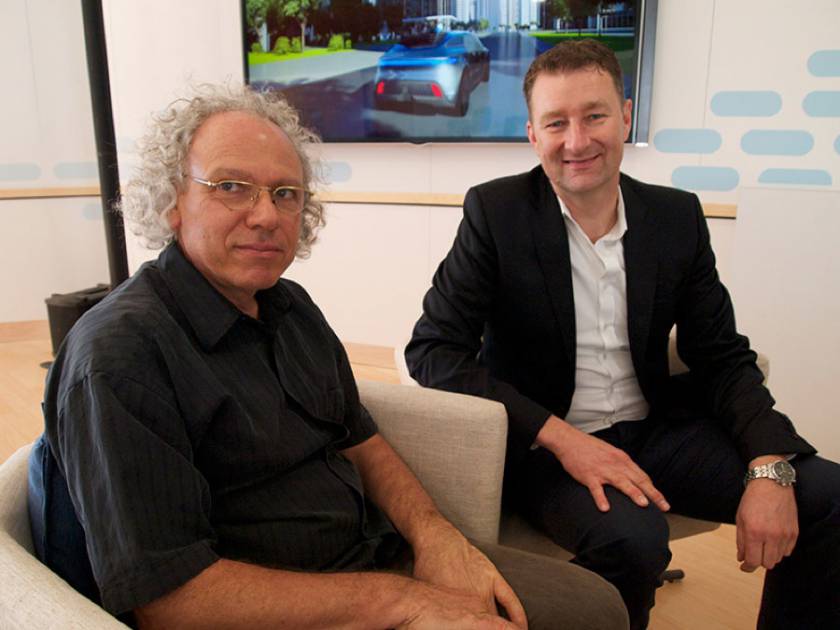 Alex Mankowsky (left), the futurist, and Holger Hutzenlaub (right), the designer, are the architects of Mercedes’s vision for mobility in 2030. (Photo by Bradley Berman.)
Photograph by Bradley Berman

Don’t call the Mercedes F 015 a “car.” In fact, our automotive lexicon doesn’t yet have a word for the sculpted-aluminum land-bound spaceship-limousine. The name F 015, pronounced ef-oh-one-five to avoid confusion with the F15 fighter plane, doesn’t help establish a vehicular classification.

Follow these clues. It’s the length of a full-size sedan. It has four large wheels set to its corners. It moves around without a human being behind the steering wheel. And it packs all traditional cargo spaces with an arsenal of computers running at full tilt. The whir of fans to keep processors from overheating is the only sound of its core operations—although it can communicate, when it sees a need, with pedestrians via a Siri-like voice, through laser-beamed messages on the pavement, and in swirls of animated lights displayed on its large open front and rear grilles using a symbolic language of its own invention.

I recently had a somewhat bumpy 20-minute ride in the almost-sensuous vehicle-robot. The experience was like being in a first-class single-cabin rail car on virtual tracks. It would not have been out of place at Disneyworld—except that the F 015 is a one-off, the single product of more than four years of Mercedes research. The vehicle is insured at about $12 million.

After my ride, I sat down with the two men most responsible for bringing the F 015 from futuristic hallucination to a tangible full-scale ride-worthy research platform for the future of autonomous mobility. Alexander Mankowsky is a futurist in Daimler’s society and technology group, and Holger Hutzenlaub, a leader of advanced design group in Germany, was based in Mercedes’s Tokyo studio when the project commenced.

The first spark of inspiration occurred in 2007, when Mankowsky—trained as a sociologist—witnessed student engineers competing in a challenge to run a self-driving car through a city environment, at the Urban Challenge held by the Defense Advanced Research Projects Agency, a program of the U.S. Department of Defense.

Alex Mankowsky: Before the Urban Challenge, I was already working on mobility cultures. People behave differently in different regions. They develop a culture. It’s different in Manhattan than in San Francisco, and so on.

Bradley Berman: Did you think about nomadic cultures?

AM: Yes, sure. Nomadic cultures mean you have everything with you. You are a moving village. It’s very funny stuff, which you can see in documentary, avant-garde and mainstream movies, including science fiction.

AM: Yeah, road movies are important because you always have a dilemma and conflict with the perception of freedom and moving with the car, and the rules and regulations that define a street, and the police. Road movies are always ending with a bad outcome for freedom, like Thelma and Louise and Convoy. In a way, the Star Trek stories are a road movie too, a kind of mobile Socialist community between the stars.

Holger Hutzenlaub: In 2011, we organized a workshop with the main city planners and architects of Tokyo. We invited Alex, and our own autonomous driving engineers. It was the first time we had a think-tank situation with people from different parts of the company across the globe.

AM: The explicit goal was, in three days, to create sketches for different future scenarios and for designers and planners to go home from Tokyo and make future scenarios for their own cities.

HH: It didn’t matter if it was the U.S. studio or the Italian studio. They had to come up with a vision, a two-dimensional picture of his or her main city, and how it would look in 10 or 20 years ahead.

BB: Were these ideas hard to sell within the company?

AM: The crucial moment was 2012 during a stressful meeting of some Daimler board members, including Dieter Zetsche (the chairman, and head of Mercedes cars). The mood was not the best.

HH: The board wanted a show car for research, but the concept developed by a completely different team was on the table. This other concept was not convincing, so they canceled it.

AM: And then I walked in with a single very black slide with the idea of a lasso.

HH: It was a visualization of the future. It showed humankind’s desire for huge buildings that became higher and higher, like the Burj Khalifa [the tallest man-made structure in the world, located in Dubai].

AM: It was really about the development of society and a lasso into the future. You have to catch something from the future and pull it towards you. I presented the strange idea of making a total futuristic car where no driving is required, and where the buildings were tall and digital. I asked, “What’s the freedom and luxury for the future?”

Hutzenlaub then showed me this image from his laptop.

HH: Obviously, mom and dad are turning around from the front row to face the kids. We found this after we completed our concept.

BB: This picture brings up a criticism, that the F 015 seems like a futuristic vision from the 1950s, sort of a retro-futuristic image, rather than something specifically forward-looking.

AM: I like the term retro-futurist. I believe it was a term made popular by the car designer J Mays, who designed the new Beetle. In this case, I don’t accept it because these cars from the ‘50s and ‘60s were very conservative, in terms of the social sense of a family with the father in the front. You see the same thing in Disney animations. You have the father going in this car to the office, but not walking. Instead, he takes just one step out of the car. The housewife and the children are going shopping according to the gender stereotypes of the 1950s. In our case, the vehicle is integrated with the fabric of communication between people. It’s designed more like a robot than a car. The robot-car or mobile robot in our vision can enhance how you interact.

HH: When that board meeting happened in 2012, we stepped into the void left by the rejection of the other team’s concept. So, when we presented, the board said, “Yes, that’s very futuristic. We believe in that. Can you go further and deeper?” This is when we got permission to continue our work.

BB: Was it inevitable that the Mercedes F 015 would take this specific shape?

AM: I would have preferred an interior without seats, but with movable furniture. It would be without safety belts and for just one person.

BB: One person for the whole car but the same size?

AM: Yes, one person for the whole car would have the ultimate luxury. You could sleep in there without any restraints. But the safety engineers said no, that’s not a good idea.

BB: The seat was in the middle?

HH: It was actually just a huge cushion.

AM: Think of how the Romans would have loved it.

HH: Out of all the ideas, we choose two that fit specifically to the Mercedes brand. One was a limousine type, which we called “the future mobility lounge,” which led to the F 015. We came up with a second idea for a taller car, the “future mobility loft.” But at that time, the members of the board decided on the lounge because if we consider this to be a future limousine, that’s our core competence. Mercedes is known for building high-class luxury sedans.

BB: So many times when we look back at futuristic concepts from the past, they look dated. Do you fear this will happen with the F 015?

BB: Do you see elements of this arriving well before 2030 in, for example, the S-Class.

HH: Sure. As soon as the either the design or the technology is mature enough to be released, and the legal aspects are solved, we will let all this thinking go into production.

AM: This is not a game. It’s too expensive to be a game.