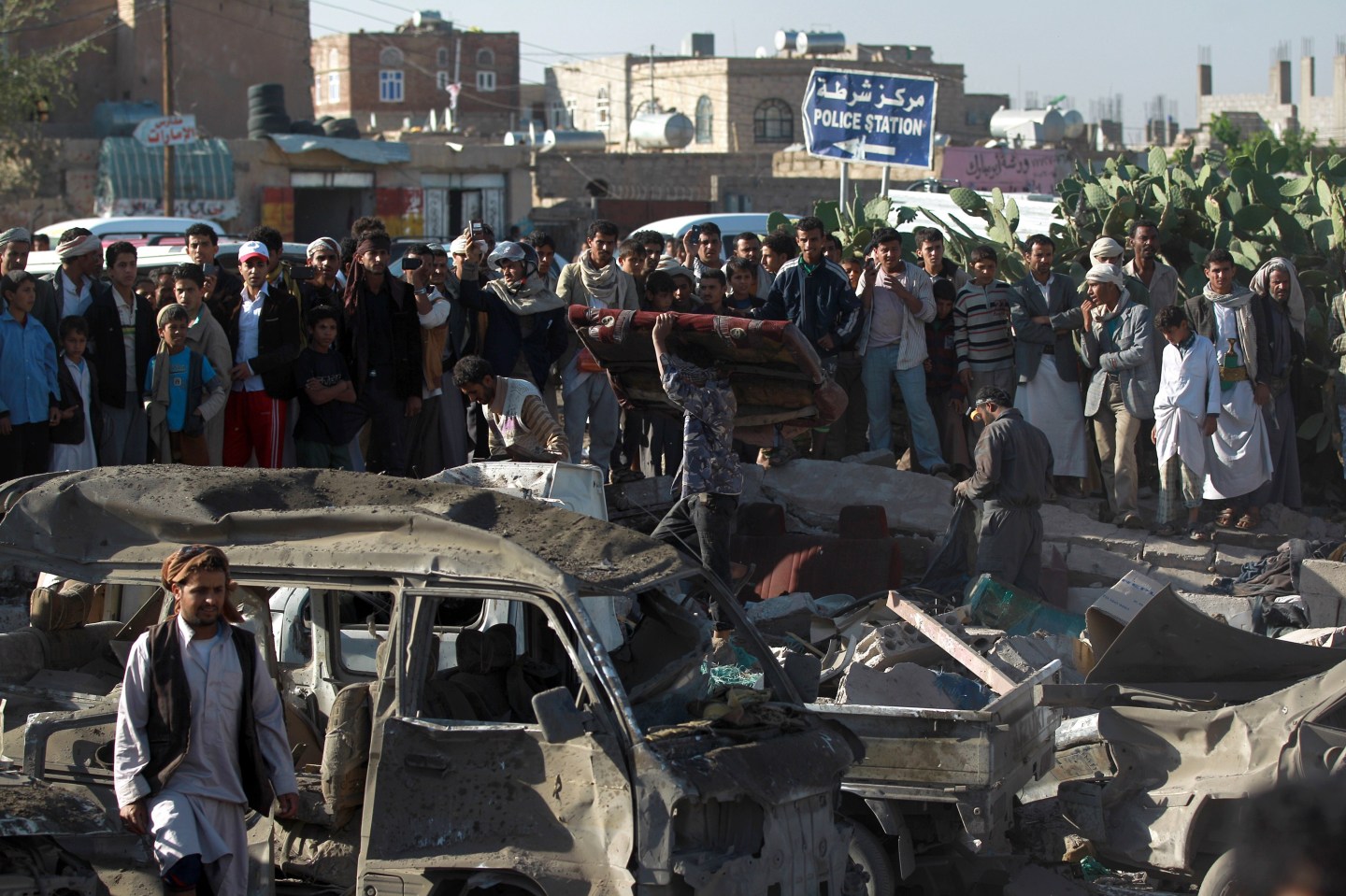 There’s nothing like a scare about the safety of middle-eastern sea-lanes to send oil prices higher, particularly when the scare involves fears of a conflict between the region’s two biggest powers.

Crude oil prices were back at their highest in two weeks at $51.32 a barrel by mid-morning in Europe, after Saudi Arabia and its allies launched airstrikes against the Houthi rebels who have overrun much of Yemen, including a military airbase that was used until recently by U.S. forces.

Prices have now surged 8% in the last 48 hours. The impact of the flare-up has been magnified by the fact that many participants in the market have bet on prices staying low all through the year. Those caught in ‘short’ positions have had to cover those positions in a hurry as the price rebounds. Fundamentally, though, the market remains oversupplied, and U.S. stocks of crude and fuel are at record highs.

Ten other countries, including other Gulf Arab states and Egypt and Sudan, took part in the airstrikes. The U.S. has agreed to provide logistical and intelligence support but nothing more.

In addition to the airstrikes, Saudi Arabia has moved thousands of troops and large amounts of heavy weaponry to the border with Yemen, in what may presage a full-scale invasion of the country in support of its beleaguered President Abd-Rabbu Mansour Hadi.

The dramatic escalation increases the risk of another front opening in a sectarian conflict that is raging across the Middle East, pitting Sunni Muslims against Shia ones. The Houthi are part of Yemen’s large Shia minority, while Saudi Arabia is the largest and most powerful Sunni state in the region.

The Foreign Ministry of Iran, the largest Shia power, warned Thursday that the airstrikes were “a dangerous step” that will worsen the crisis.

Oil prices are always sensitive to geopolitical problems in the region, but particularly so when they threaten vital choke-points in global sea-lanes. Located at the south-western tip of the Arabian peninsular, Yemen commands the gateway to the Red Sea and the Suez Canal, through which around 5% of the world’s oil passes, according to the Energy Information Administration.

Israeli Prime Minister Benjamin Netanyahu warned Congress last month that “Backed by Iran, Huthis are seizing control of Yemen, threatening the strategic straits at the mouth of the Red Sea. Along with the Straits of Hormuz, that would give Iran a second choke-point on the world’s oil supply.”

Teheran disputes that analysis, saying it has never tried to interfere with the passage of ships through the Red Sea.

The Strait of Hormuz, which separate Arabia from South Asia, are far more important to the global oil trade, as 15% of the world’s oil supply has to come out through it.

Higher oil prices would theoretically be welcome for Iran, which has been sharply critical of Saudi Arabia’s decision in November to start a price war to defend its share of the global market.

But far more than higher oil prices, Iran needs a deal with its international partners on its nuclear program that will allow crippling sanctions on its economy to be lifted. It’s also far from clear that Iran would want to rile China, an important ally, by disrupting sea traffic through the Straits of Bab el-Mandeb.

Long-running talks about Iran’s nuclear program are at a crucial stage. CBS reported an official travelling to the talks in Lausanne, Switzerland, with Secretary of State John Kerry said Thursday that “we very much believe we can get this done by the 31st.” The month-end is the deadline for reaching a political framework for a deal (they have until June to agree on the technical details).