Merkel, Tsipras put on a brave face for the camera – but no deals 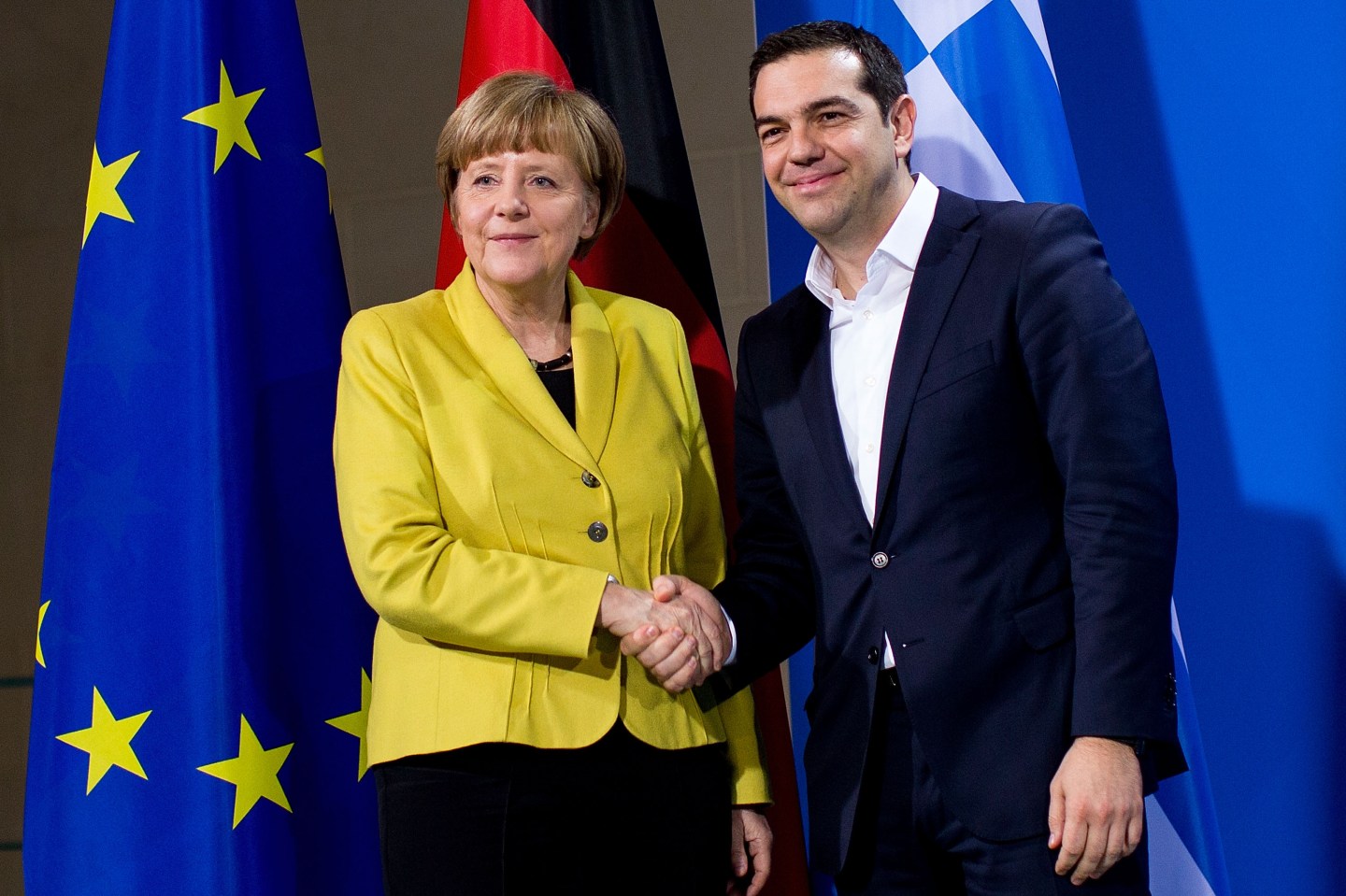 BERLIN, GERMANY - MARCH 23: German Chancellor Angela Merkel and Greek Prime Minister Alexis Tsipras depart after speaking to the media following talks at the Chancellery on March 23, 2015 in Berlin, Germany. The two leaders are meeting as relations between the Tsipras government and Germany have soured amidst contrary views between the two countries on how Greece can best work itself out of its current economic morass. (Photo by Carsten Koall/Getty Images)
Photograph by Carsten Koall — Getty Images

It was, as the Germans say, all peace, joy and pancakes at the Bundeskanzleramt Monday, as Angela Merkel and Greece’s Prime Minister Alexis Tsipras met for face-to-face talks for the first time.

The only problem? After the first hour of talks, there was no suggestion that the two were any closer to keeping Greece from bankruptcy and keeping Germany from getting a good deal of the blame for it.

Scheduling a press conference after only one hour of talks when you have the prospect of a long “open-ended working dinner” ahead of you might seem an odd piece of planning, but the two were anxious to play down any suggestions that this meeting could result in any concrete agreements. Merkel was at pains to put distance between her and the ultimate decisions on keeping Greece’s bailout going, arguing that “Germany isn’t the institution that decides whether or not the program is being carried out properly.” Meanwhile, Tsipras joked that “I haven’t come to Berlin to ask Germany to pay Greece’s pensions!” It was that sort of press conference.

Nothing that either said gave anything away on the two key questions of the day: does Greece intend to carry out the rest of the reforms required to unlock the remaining billions in its bailout deal (as it says in Brussels), and is Germany willing to risk breaking up the Eurozone if Tsipras refuses to push through any more ‘austerity’ (as he promises at home)?

Merkel even avoided saying anything like her oft-heard “We want Greece to stay in the Eurozone,” perhaps in the knowledge that it would only provoke questions about the alternative, but gave her characteristic summary that Greece needs structural reforms, a solid budget and a functioning administration if it is ever to get out of a crisis that has shrunk its economy by 25%.

Despite a marked softening in tone, Tsipras didn’t appear to have changed his main aim of persuading Merkel to soften the terms of the bailout, particularly as regards getting the European Central Bank to allow Greece’s banks to lend the government more through the Treasury bill market.

“If the political level reaches an understanding, then you can solve problems of, for example, financing gaps at an institutional level,” Tsipras said.

Greece’s government expects to make all the repayments that are due to the International Monetary Fund this month, but it’s not clear whether it has the cash reserves to carry on making payments next month. A fresh slowdown in the economy has hurt Greece’s chances of collecting enough in taxes to cover them.

The two even managed to talk about war guilt and reparations in reasonably measured terms, even though here, too, there was only a hint of rapprochement.

Tsipras went out of his way to calm some of the anti-German sentiment that he himself has fostered at home with emotional claims for reparations for crimes committed by Nazi Germany during its occupation of Greece in the second world war.

“Today’s Germany has nothing in common with the Third Reich,” Tsipras said, adding that he was “angry” when his own party paper published a picture of German finance minister Wolfgang Schaeuble in Wehrmacht uniform making gross references to the Holocaust. He also stressed there was no plan to push through a new law allowing Greece to seize German property in the country as compensation, and that the claim for reparations wasn’t connected to the current crisis.

Merkel, for her part, merely repeated that the question of reparations was “settled, both politically and legally,” but acknowledged that “it’s in our interest to come to arrangements with our neighbors, whether it’s Poland…or Greece.”

She also left open the possibility of channeling more money to Greece through a long-term development bank-style project.

And with that, the pleasantries were over. The two posed for the cameras with a handshake, both seemingly relieved that the other had said nothing that required an immediate contradiction.

Now for the hard part–a German dinner that could last four, five or six hours.