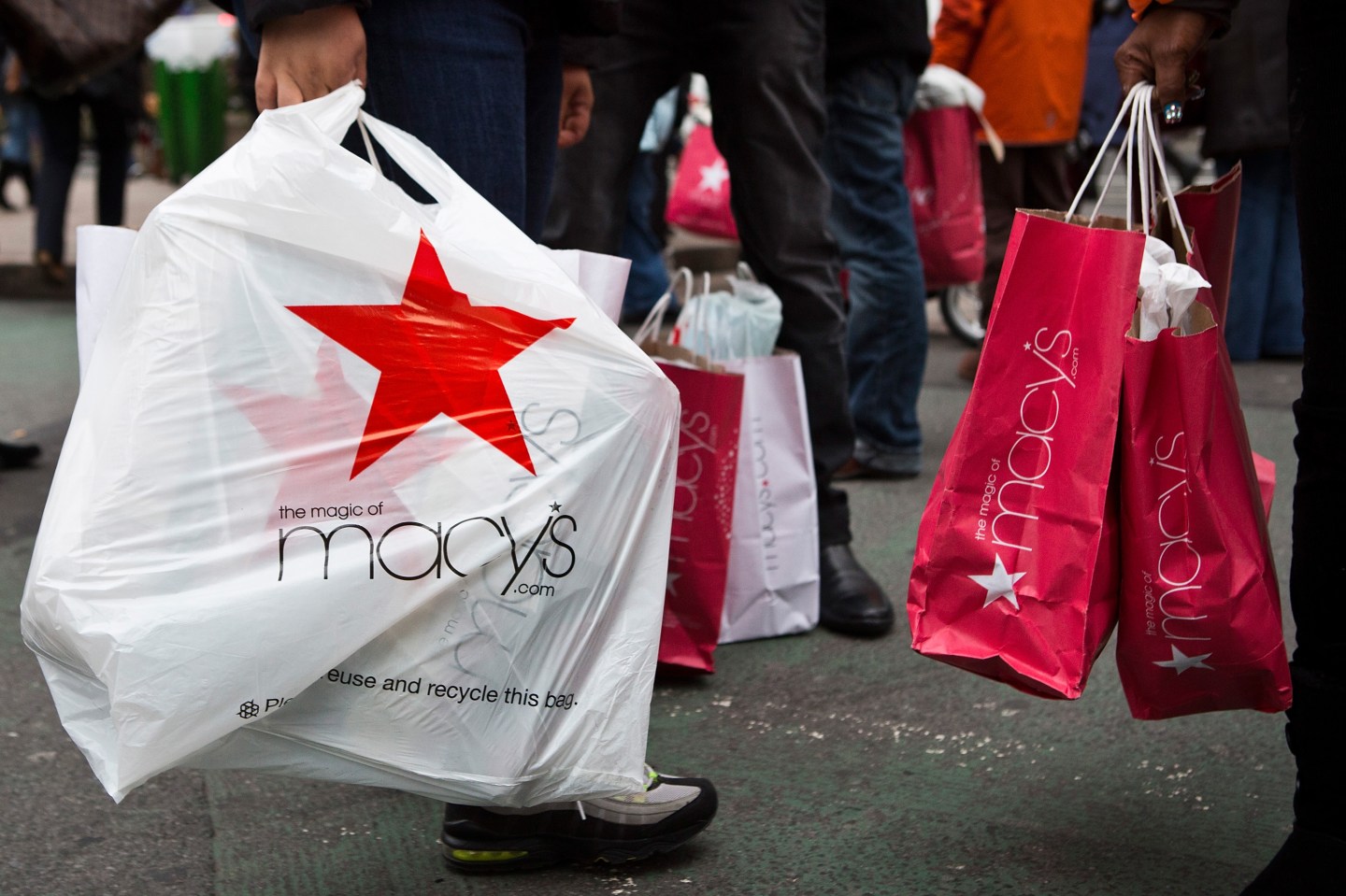 American shoppers have never been able to earn loyalty points from one retailer and then redeem them at another. That’s about to change.

In May, Macy’s (M), Rite Aid (RAD), ExxonMobil (XOM) and four other brands plan to introduce the first U.S.-based loyalty program that encompasses an entire team of retailers. The program, called Plenti, will be operated by American Express (AXP).

After the program gets underway in May, a Macy’s customer will be able to use Plenti points won from, say, buying a pair of shoes at one of its stores to fill up at a Mobil gas station or to pay an AT&T (T) phone bill. In the past, Macy’s shoppers could only use their points at Macy’s.

For consumers, the benefit will be the ability to earn rewards more quickly and to have far more flexibility in redeeming them. In theory, the initiative reduces “points purgatory,” an industry term for points that expire or go unused because a customer has too few to spend.

One study has found that the average American is a member of 29 loyalty programs but only uses eight actively. Those programs sitting dormant are like lost money.

For the companies, even ones like Macy’s that already have huge loyalty programs, Plenti is a way to tap into the broader customer base of its partners, save on program costs, and lift sales by offering a more appealing program to customers.

The key to success for such a coalition of retailers, experts say, is to have complementary focus and shoppers who visit frequently.

The coalition, which plans to double or even triple the number of members in the coming years, is not naming names. But it is looking at adding a national restaurant chain, a grocer and a do-it-yourself retailer (the two biggest such companies are Home Depot (HD) and Lowe’s (LOW)). John Learish, Rite Aid’s senior vice president of marketing, said a national grocer would be “the most powerful” addition to the coalition because it would add more frequent shoppers.

Martine Reardon, Macy’s chief marketing officer, said the program addresses a shortcoming of Macy’s Star rewards program: insufficient frequency of shopper visits.”When you’re a fashion retailer like us, unlike a grocery store, you don’t need to come in once a week,” she said.

Rite Aid, which generates 80% of its annual sales through its mammoth Wellness + program, sees it as a way to win some business from the customers of coalition partners who may go to larger, rival drugstores like Walgreens (WBA) or CVS (CVS), which operate massive loyalty programs too.

We can already tell you who won’t be part of Plenti: Nordstrom (JWN), J.C. Penney (JCP) or CVS, or any direct competitor to any of the coalition members. Each participant gets the right to be sole company of its kind in the group.

It’s easy to see why: Macy’s would undoubtedly balk at the idea of a shopper using points earned at Macy’s to get a discount on something at Penney. Target (TGT) and Wal-Mart Stores (WMT) are seen as unlikely members given how much overlap in product assortment with other coalition members and the scale of their own programs.

The other members of the Plenti coalition are online video service Hulu, utility company Direct Energy and insurer Nationwide. Every 1,000 points will yield at least $10 in savings, and members will get additional special offers. People can use whatever debit or credit card they choose (though Amex will launch a Plenti branded credit card.).

Coalition loyalty programs have been a fixture of consumers’ life for eons in places like Canada, the European Union and Australia. The Air Miles program in Canada, operated by Loyalty One, is used by 75% of households, with 10 million members in a country of 35 million people. In the United Kingdom, Nectar, which includes ExxonMobil gas stations, is used by 70% of British households.

American Express bought Munich-based marketing firm Loyalty Partner in 2011 for $660 million in part to be able to tap that company’s loyalty program express and potentially bring it to the U.S. (The company could use a home run after Costco Wholesale (COST) last month said it was ending its 16-year relationship with American Express, a move that affect 10% of Amex cards in circulation.)

But the phenomenon has taken years to reach American shores for a variety of reasons. An exception are airlines loyalty programs.

One big factor is that in such a large country as the U.S., there is still a lot of fragmentation in pockets of retail. A case in point are food stores: there are no truly national supermarket chains. And companies are very sensitive about how much data they share outside the company.

Even under Plenti, companies will share little data. For instance, Rite Aid will have no way of knowing how many handbags a customer may have bought at Macy’s. What’s more, the competitive culture and thin margins in the U.S. have long been a hindrance to joint efforts, said Michael Gore, global cards and loyalty executive at ExxonMobil, which participates in a number of coalition programs in Europe.

Still, the ability to share costs is compelling, as is the need to step up the attractiveness of loyalty programs at a time brands across the spectrum are picking up their game: Penney, Kohl’s, Target are just a few of the retailers making major improvements to their programs.

“When you look at the success at coalitions elsewhere in the world, there is a frequent destination,” said Emily Collins, a senior analyst with Forrester Research and a leading expert on loyalty programs who correctly predicted in 2013 that the first U.S. based loyalty coalition program was two years away. “They’re covering a lot of consumer spending categories, which is what a coalition needs to be relevant to consumers.”