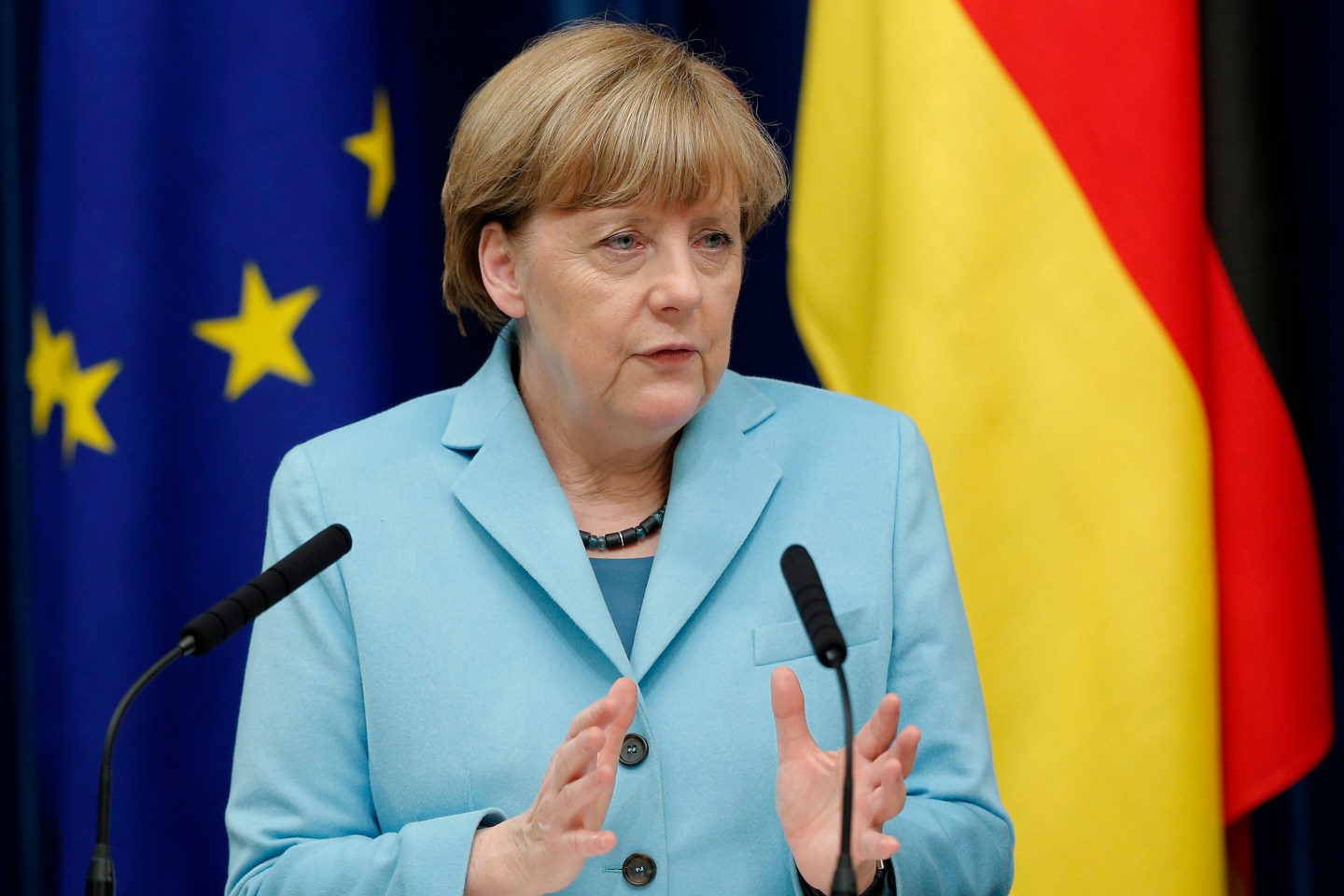 Angela Merkel, Germany's Chancellor, gestures as she speaks during a news conference in Tokyo, Japan, on Monday, March 9, 2015. Japan could do more to deal with its World War II legacy and reconcile with Asian neighbors, Merkel signaled at a press conference Monday with Japanese Prime Minister Shinzo Abe. Photographer: Kiyoshi Ota/Bloomberg
Bloomberg via Getty Images

Greece’s Prime Minister Alexis Tsipras is to visit Germany’s Angela Merkel head-to-head for the first time next Monday, for emergency talks on stopping the country’s slide towards exit from the Eurozone.

The talks, scheduled for Monday, will try to repair relations that have deteriorated badly in the last few days, with Tsipras reviving claims for Nazi-era war damages before parliament, and his Justice Minister preparing a law that would allow the seizure of German state property in Greece.

Meanwhile, back in Berlin, German finance minister Wolfgang Schäuble poured scorn on the unreliability of the new government in Athens Monday. Deutsche Welle reported him as telling a conference that: “They won’t pay back Greece’s debts by conjuring up new claims about Germany’s obligations from World War 2…Whoever promises their population that is hiding the truth.”

Schäuble said that the new government has “once again destroyed all trust” between Greece and the Eurozone.

Berlin says that it won’t pay any new reparations stemming from WW2, as the issue was dealt with in the “Two plus Four” treaty on German reunification in 1990. But a number of German politicians argue that the case isn’t that clear-cut.

Der Spiegel reports that ex-Chancellor Helmut Kohl’s draughtsmen deliberately avoided the term “Peace Treaty” in 1990 partly because they knew it would trigger Greek claims for the repayment of a 476 million Reichsmark loan that was forcibly extracted from Greece during the Nazi occupation. Analysts put the value of that loan today at up to €11 billion (although a report prepared by Greek experts puts it at €100 billion).

It’s tempting to think that Merkel could use Tsipras’ visit to announce the write-off of €11 billion of the money lent by Germany to Greece in 2010 (before everything started being channeled through the European Financial Stabilization Facility). It would show goodwill and, in any case, Germany isn’t going to see the money again for 27 years, even in a best-case scenario that few believe in any more.

Neutralizing the reparations issue would make it harder for Tsipras to duck the real challenges facing Greece today, and give him enough of a political victory to let him complete the bailout program. It would also make clear whether Tsipras really is more interested in righting historical wrongs, or just in squeezing money out of others with no strings attached to keep an unsustainable Greek system alive for a few more months.

Either way, it’s unlikely to happen. Admittedly, Germany can do what it likes with the 2010 loan, so the issue is more one of political will, than of technical constraints. But weighing Nazi atrocities in the calibration of a bailout subscribed to by 18 other countries and the IMF is impossible, even if it were intellectually honest (which, we’ve argued before, it isn’t anyway).

But the will isn’t there either, not least because Berlin fears that one concession would only lead to more demands from Athens and a further refusal to carry out the required reforms. You can see why: deputy finance minister Nadia Valavani told parliament Tuesday that receipts from future privatizations will be used to finance social spending rather than reduce debt–a clear breach of Greece’s promise in February not to introduce laws rolling back the bailout’s conditions without consulting the creditors.

Ultimately, neither one loan from 70 years ago, nor another due to be repaid in 27 years has any real meaning, measured against the very real tasks that Greece has to do to today to make its economy fit for the 21st century. Nothing will be resolved until the Syriza-led government stops trying to avoid and ignore those challenges. And that’s the message that Tsipras is likelier to hear in Berlin next Monday.