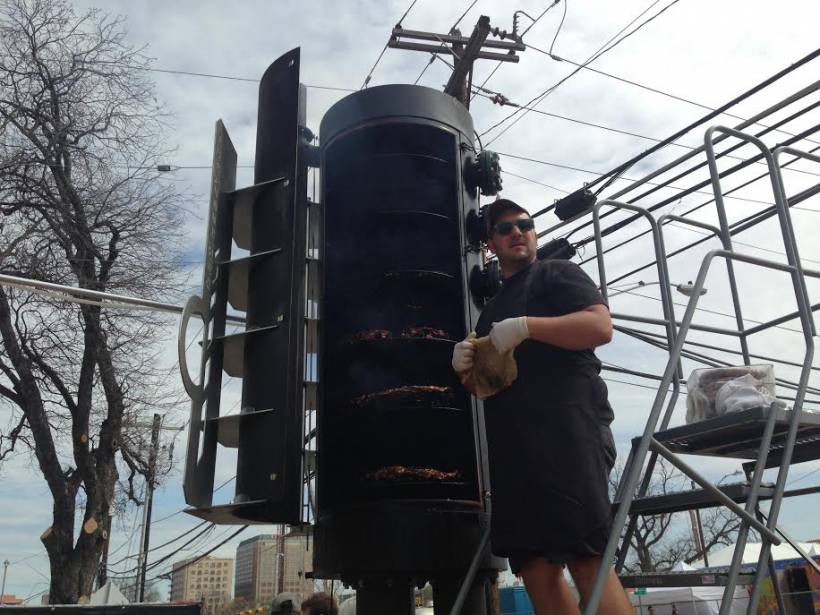 General Electric (GE) has parked quite a contraption outside of the Austin Convention Center. It’s not a new kind of wind turbine or aircraft engine. Rather it’s a 12-foot tall smoker, and every day of SXSW Interactive it’s been pumping out 230 lbs. of barbequed brisket, ribs, sausage, beets and tofu.

You might think that GE is showing off a prototype for its line of household hardware, but the company actually sold off its consumer appliance division to Electrolux for $3.3 billion last September. Instead GE built this BBQ monster as a proof-of-concept for the industrial Internet, showing how sophisticated sensors and data analytics can make even the most commonplace machines intelligent, said Lynn DeRose, a GE senior scientist and the BBQ project’s “pit chemist.”

There’s more than just steel and iron to GE’s Super Smoker. It has seven temperature, humidity and airflow sensors embedded throughout its frame. Those sensors lets veteran Texas pit master Evan LeRoy track the levels of heat, moisture and smoke flowing past each of the five grates in the BBQ chamber. Readings from each of those sensors map to three large displays – all placed within safe distance of grease spatter – showing LeRoy and DeRose precisely how the smoker’s environment is changing on a minute-by-minute basis.

Does all of this technology help produce better BBQ? Not exactly. But it does help make more consistent BBQ. The simple act of opening the smoke chamber or firebox doors to check on its internal state changes that state, releasing smoke, heat and moisture, and creating a rush of air intake, which can disturb a perfectly stoked fire.

“[LeRoy] is cooking the same BBQ he always has,” DeRose explained. “But he is able to understand how the smoker is working without looking inside. Because he isn’t constantly checking, he’s getting a more constant smoke.”

GE’s technology isn’t taking the art out of preparing awesome BBQ, but it is using science to refine that art. For example, when LeRoy and DeRose first fired up the smoker this week, they discovered the humidity levels were dipping and falling erratically, which they quickly figured out was caused by a higher than expected moisture levels in the oak they were burning. LeRoy made adjustments to his fire, feeding it a relatively constant stream of fuel instead of letting its fire burn down and then replenishing. The result: the smoker bathed its meat in a steady moist smoke without the help of any additional water, DeRose said.

GE envisions using this technology as a way to make its industrial machines and appliances more intelligent, a concept it calls The Brilliant Factory. If machines can tell you when they’re about break, then industrial customers can build much more efficient assembly lines that only go down for scheduled maintenance.

But unless some company emerges with the desire to mass-produce artisanal BBQ briskets — each smoked for 16 straight hours –the Super Smoker likely will never become a commercial product. That doesn’t mean, though, we won’t see some of this technology make its way into our kitchens or backyards.

GE may no longer have a consumer appliances division but it does license its technology to other manufacturers. Imagine an oven aware of its exact internal conditions and how the variables of heat and convection airflow will cook different kinds and sizes of meat in different ways. Such an oven won’t miraculously reproduce Grandma’s succulent pot roast, but it could prevent you from burning it to a cinder.

Kevin Fitchard (@kfitchard) has covered wireless networks and technology for 15 years, first at Telephony Magazine and then at Gigaom. Before that he worked as a professional line cook.