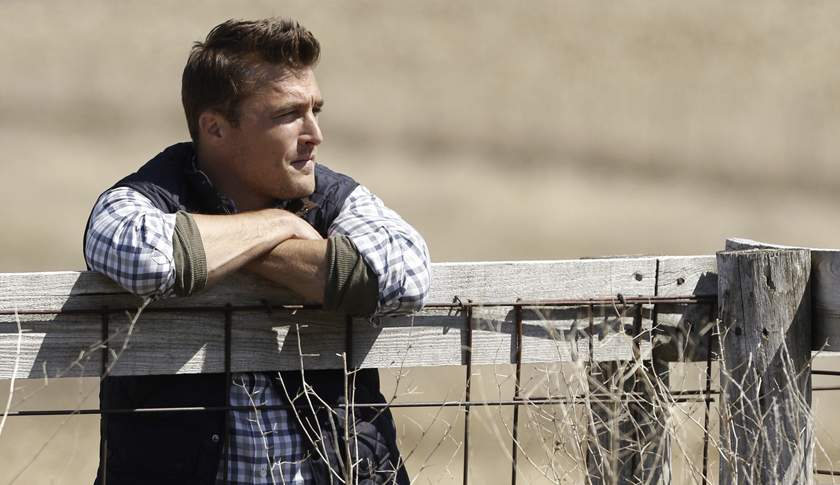 THE BACHELOR - Chris Soules, the stylish farmer from Iowa, is ready to put his heartache behind him to search for the one missing piece in his life - true love - when he stars in the 19th edition of ABC's hit romance reality series, "The Bachelor," which returns to ABC in January 2015. (Photo by Matthew Putney/ABC via Getty Images)
Photograph by Matthew Putney — ABC via Getty Images

Iowa farmers are having a moment.

On March 7, the first-ever Iowa Ag Summit in Des Moines drew Republican presidential hopefuls like former Florida Governor Jeb Bush, Senator Ted Cruz, and New Jersey Governor Chris Christie. Hosted by Bruce Rastetter, an agribusiness multimillionaire who was dubbed “the real Iowa kingmaker” by Politico, the stated goal of the summit was to create a “forum solely dedicated to matters that directly affect Iowa farmers who feed and fuel not just the country, but the world.” Rastetter, whose fortune comes from pork, ethanol, and farm real estate businesses, both bankrolled the event and emceed it, bringing each candidate onstage for 20 minutes of questioning.

And on Monday night, ABC set the finale of its Prince Farming season of The Bachelor in rural — or, with a population of about 400, some might say desolate — Arlington, Iowa. The show’s final rose ceremonies typically take place on tropical islands, but bachelor Chris Soules’ hometown played such a central role this season that the producers used his sprawling property and the barn where he “raised [his] first pig” as the primary backdrop.

All of this attention has glossed over the harsh realities actual Iowa farmers are facing, say groups like the Iowa Citizens for Community Improvement (ICCI). “There’s more and more consolidation going on, it’s harder and harder to stay in business, the mindset is get big or get out,” says Hugh Espey, executive director of ICCI. In 1974, there were 126,104 farms in Iowa, 1.4% of which were more than 1,000 acres. In 2012, there were 88,637 and 9.3% of them were 1,000 acres or more. The number of farms owned by corporations in the state nearly doubled between 1978 and 2002, while the amount owned by individuals or families dropped by 24%.

There doesn’t appear to be a shortage of family farms on a national scale — in 2011, 90% of U.S. farms were characterized as small family farms by the U.S.D.A. But these farms produce only a small fraction of total farm output in the country. Small farms account for only 26% of total farm production in the U.S. Meanwhile, the 8% of farms in the U.S. that are considered midsize and large-scale account for 60% of production. Most small family farmers need to rely on off-farm income to make ends meet: In 2011, average off-farm income for small farming households ranged from $40,600 to $97,600.

The Ag Summit, says George Naylor, a farmer for 39 years and former president of the National Family Farm Coalition, did not address issues that real Iowa farmers are facing, like boom-and-bust corn prices, “little towns all boarded up” (e.g.: Arlington, Iowa), and environmental issues. Corn prices in Iowa jumped from $2.04 per bushel in January 2005 to $4.44 in in January 2009, thanks largely to the passage of the Renewable Fuel Standard, which established a federal mandate for ethanol production. Corn prices spiked again in January 2013 to $7.06, this time because of drought. They have since plummeted to $3.85 in January of this year.

Politicians, Naylor says, continue to explain away these problems by simply saying it’s a product of “modern agriculture” and pushing taxpayer-funded farm subsidies as the solution. The federal treasury paid $256 billion in farm subsidies between 1995 and 2012, with $24.9 billion going to Iowa, more funding than all but one U.S. state, according to the Environmental Working Group.

The subsidies are intended to help farmers when market prices are low. But instead, Naylor says, they drive farmers to overproduce, which only pushes prices lower, allowing large agribusiness companies to buy cheap feed, raise cheap livestock, and sell cheap meat.

“That just puts farmers in the same situation where they have no way out,” says Naylor, “except to try to produce as much as they possibly can every year, fencerow to fencerow, and hope to God that prices are such that they make ends meet.”

Republicans attended the Ag Summit, but Democrats, Naylor says, have the same agenda. “The rhetoric might be a little bit different if those candidates there were Democrats, but actually, their policies would all be the same.”

Instead of subsidies, which take taxpayer dollars and send them to farmers directly, Naylor advocates for setting floor prices to stabilize the market without encouraging farmers to overproduce. “If you want to buy feed for your hogs, you have to pay a price that would reflect what it would have actually cost to raise that feed,” Naylor says.

If the connection between the Iowa Ag Summit and The Bachelor feels tenuous, consider this: Soules works for Rastetter, selling real estate for one of his companies, Summit Ag Investors. This may help explain why people like George Naylor are skeptical of his farming credentials. “I would think any real farmer would be outraged that this guy gets portrayed as a real farmer,” says Naylor.

But according to Soules, he is involved in the operations of his family’s farm, which grows corn and soybeans sold either for feed or ethanol and raises hogs for TriOak Foods. He works for Rastetter, he says, as an independent contractor, often during the slow parts of the farming cycle (winter and late summer). “When I started working for him out of college, I sort of needed the job to supplement the farming business and diversify it,” Soules told Fortune. As to Naylor’s statement that he’s not a real farmer, Soules says, “I guess everybody has an opinion. I don’t know George and obviously he doesn’t know me.”

Like so many other farmers depending on outside income, how much of Soules’ livelihood comes from the farm versus his land acquisition work, he says, “depends on the year and depends on crop prices.” At this point, he says, most of his income comes from farming.

That may change, though, if the federal ethanol mandate is rolled back — a move that Rastetter opposes, a position he made very clear to candidates at the Summit last Saturday.