This little-seen MSNBC interview has big implications for working moms 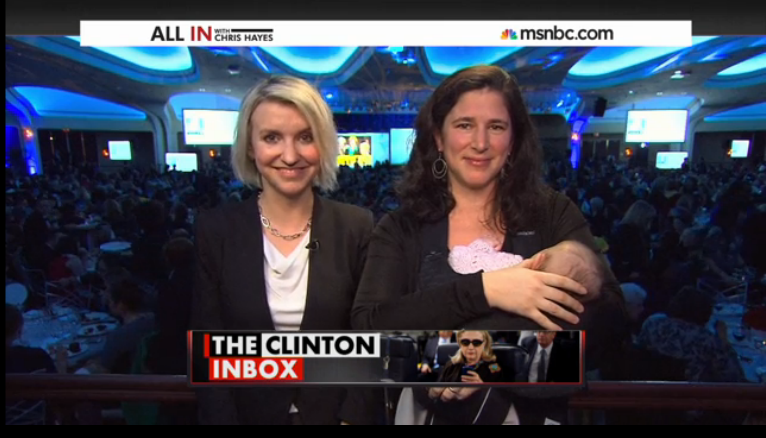 When journalist Rebecca Traister took to MSNBC recently to talk about the Hillary Clinton email story, I found myself riveted. It wasn’t so much by what Traister was saying, though that was surely interesting. It was who appeared beside her during the interview: her newborn daughter, Bella.

For five minutes or so, the senior editor at The New Republic and book author fielded questions from Chris Hayes about the political fallout from Clinton’s use of a private email account while she was secretary of state. Throughout the conversation, Traister’s baby slept soundly in a carrier on her mother’s chest.

As I watched the interview, I couldn’t get over the fact that two worlds were colliding on live TV: that of the pundit and that of the parent.

In most professional settings, there still is great pressure for women to pretend that their kids don’t exist, at least from 9 to 5. Women feel the need to go out of their way to avoid the stigma—yes, stigma—of being labeled a mom.They don’t say they’re leaving work early for a parent teacher conference. Instead, they say, “I have a meeting.”

Why? Even in 2015, being a mom in the workplace means having your commitment questioned, some colleagues won’t take you seriously, and your boss may pass you over for a promotion — no matter how hard you’ve worked or the results you’ve produced.

Just last week, executive Katharine Zaleski issued a public apology in Fortune to all the mothers “whose work ethic I silently slandered” while a manager at the Washington Post and Huffington Post—and before giving birth to her own daughter.

And yet here was Traister, in front of tens of thousands of viewers, demonstrating that you don’t have to hide the balancing act—that it is quite possible to have a baby and a brain at the same time. In a public, high-profile, but matter-of-fact sort of way, Traister and Hayes were saying, “Newborn baby, breastfeeding mom, no big deal—let’s get to work.”

Traister, who recently wrote a much-discussed policy piece on working motherhood, stresses that she didn’t set out to make any kind of statement by bringing Bella on the air. “I wasn’t trying to draw attention to myself or my situation,” she told me, quickly adding that “the context was important.”

Indeed it was. Hayes conducted his interview with Traister while she was attending a Washington event marking the 30th anniversary of Emily’s List, a political action committee that supports pro-choice Democratic women running for public office. Traister is actually on maternity leave. But she didn’t want to miss the Emily’s List conference and dinner, and so she took nine-week-old Bella with her.

While Traister was there, the producers for “All In with Chis Hayes” called her cell to see if she was available to discuss the Clinton mess. She told them where she was, and, as it happened, they already had a camera at the conference. Traister was, well, all in

So was Bella. Strapped to Traister, the baby was snoozing away as the interview was about to start. Reluctant to risk waking up Bella by handing her off, the author of Big Girls Don’t Cry asked if Hayes was cool with having an infant as part of the show. The host, who himself had urged dads to “take some time with your frickin’ kid” during his own paternity leave last year, said he was. Traister decided to go for it.

“It seemed totally natural,” says Hayes, who has an 11-month-old son and a three-year-old daughter. “This is part of….normalizing that kind of thing.”

Traister acknowledges that she wouldn’t have tried this at an “OPEC conference or ‘Meet the Press.’ I was on a show that wasn’t put off by having a guest with a baby strapped to her, at a conference of people who understand the way that parenthood bumps into work life.’

And, like any smart working mom, Traister had a Plan B, just in case. “If the baby had been awake or started to cry—if she was interfering with the audio—I would have handed her off,” Traister says, noting that she had several pals on hand ready to swoop in and take Bella. “I wouldn’t have stood there with a crying baby.”

Hayes made a passing reference to mother and child on the air, joking that she was “clearly in the midst of having it all with her new daughter, Bella, by her side.” But otherwise, Traister did her job and Hayes did his. What was most remarkable, perhaps, was how unremarkable the baby’s presence was.

All of which reveals a simple but powerful lesson: It doesn’t take a whole lot to create a supportive work environment. But it sure makes a huge difference for parents trying to juggle a multitude of demands.

Randye Hoder writes about the intersection of family, politics and culture. Her articles have appeared in The New York Times, Time, the Los Angeles Times, The Atlantic and Slate. You can follow her on Twitter@ranhoder.