Will Angela Ahrendts redefine luxury with the launch of the Apple Watch? 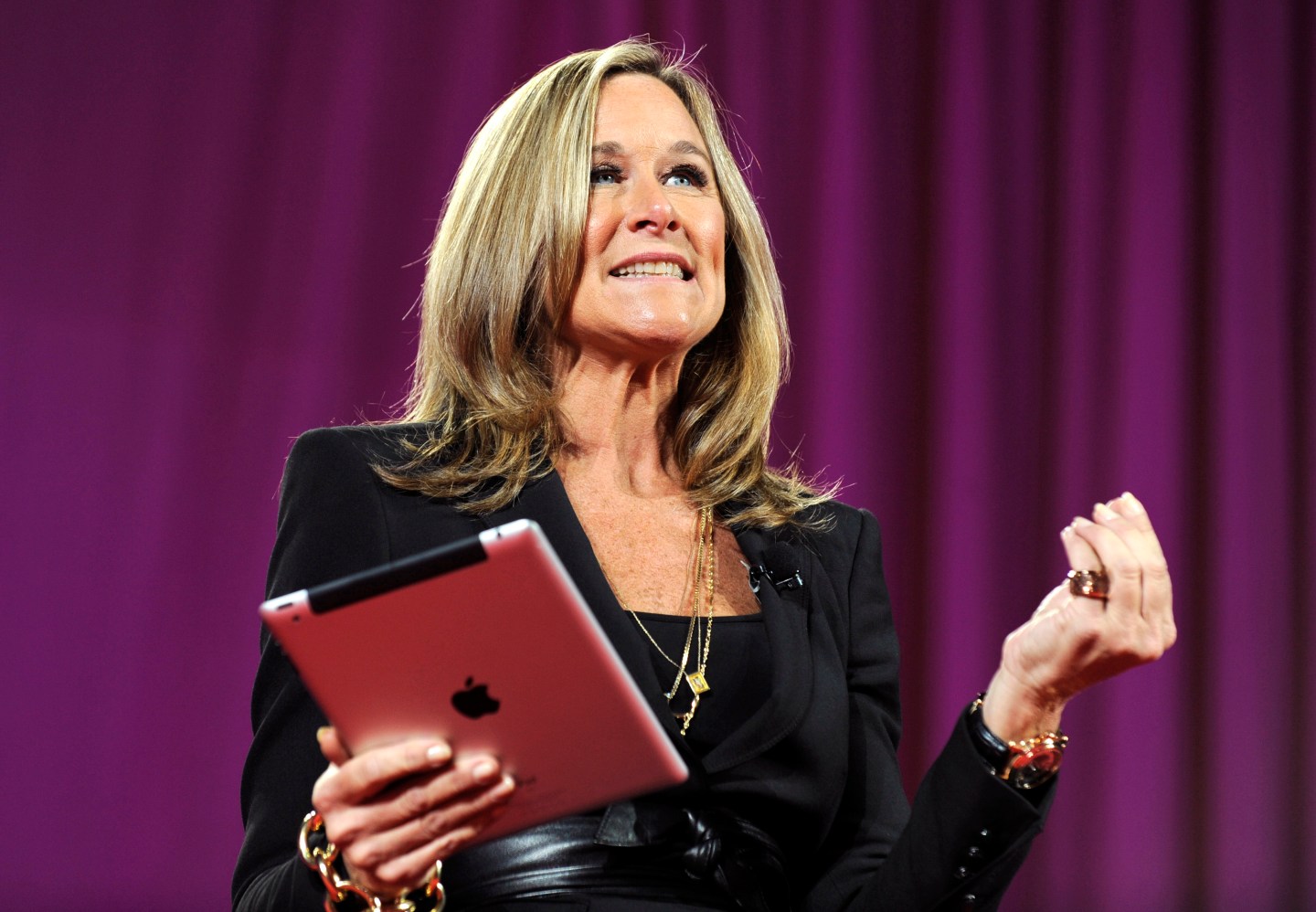 The prices are set. The date has been announced. The clock is ticking.

Apple will release their first wearable product, Apple Watch, on April 24, and the launch is bringing the one-time computer-maker into a category that it has never worked in before: luxury.

It will take more than Retina display imagery and smoother-than-silk marketing videos to put a shine on Apple’s smartwatch. For it to be the first major, successful post-Steve Jobs product, consumers can’t merely want it—they’ll have to lust for it.

That’s precisely why, 16 months ago, the world’s most valuable company hired Burberry’s then-CEO Angela Ahrendts and installed her as their senior vice president of retail and online stores. Increasing her reportedly $26 million salary to over $70 million annually (more than Apple CEO Tim Cook receives), Apple has tasked Ahrendts with “oversight of strategic direction, expansion, and operation” of the company’s sales channels. It’s no small job; a huge portion of Ahrendts’ mission will be to fundamentally redefine how the world views Apple.

This isn’t the first time Apple pursued an identity reinvention. With the launch of iTunes and the iPod in the 2000s, Apple transitioned from being a company focused on productivity to one centered on entertainment and lifestyle. And while they would likely continue making piles of money if they stayed this course, there’s another argument that says if they steer towards luxury, they’ll make piles more.

“These are giant oceans of money that are currently being spent on products that have almost no functional value,” says Horace Dediu, an independent analyst who has been following Apple since 2005. For instance, a $4,000 Louis Vuitton bag has no more carrying capacity than the $100 purse you might buy from Walmart, he explains. But it nets its company a lot more money. Dediu says that’s where Apple is going with products like its $10,000 gold smartwatch—and the company needs Ahrendts to take them there.

Since leaving London and landing in Cupertino, Ahrendts and her resume have already garnered buzz. But all that really matters about her past is how it will affect Apple’s future. There are distinct reasons she was put in charge of steering Apple’s sea change, says Rahul Sharma, a retail analyst and managing director at London-based Neev Capital, and maintaining the company’s premium pricing is one of the largest. “Price is so important in electronics,” says Sharma. “It’s just a consistent trend with these companies that you constantly see price erosion.”

Historically, Apple has managed to hold the price points on its products by offering incremental innovations between major redesigns, allowing the company to squeeze as much revenue as possible out of its product designs. In general, there’s only a few ways to buy cut-rate Apple products: either through the company’s refurbisher program or when a product is put on sale near the end of its life. The one time Apple did make an affordable product—the iPhone 5c—Tim Cook admitted sales were weaker than expected. And it’s worth noting that this failed product launched the month before Apple hired Ahrendts.

Ahrendts has excelled at maintaining premium pricing, notes Sharma. “Apple needed someone exactly like that, somebody that can keep helping them protect that price integrity,” he says. Prior to her arrival at Burberry, the company struggled in that respect, mostly because clothing is subject to the fickleness of fashion. From product to product, Burberry’s margins were all over the place, says Sharma. Ahrendts focused the clothing company on accessories like handbags and leather goods, instead. These products had a higher margin and turned the one-time clothing company into a brand. “She really up-scaled the product—the accessory piece was basically her contribution—and she chopped back some of the more traditional pieces of Burberry,” says Sharma.

Meanwhile, in digesting all that the Apple Watch is (and isn’t), it’s clear the smartwatch is still just an accessory to the iPhone—and the smartwatch’s bands are accessories to the wearable, letting Apple drill into a market where it has never trafficked before. It’s also easy to imagine new bands being released in the future, letting Apple Watch buyers continually refresh their digital timepiece. All this activity is right in Ahrendts’ wheelhouse; she mastered monitoring SKUs at Burberry, pulling underperforming ones to get the best-sellers onto the floor. But she’ll need to find a way to apply this to Apple’s retail footprint, a layout that is decidedly different than Burberry’s.

Imagine it’s after Apple Watch launch day. The watches are all arranged on the table, and you have a throng of people gathered around. “What will they want? They’ll all want to try the gold watch,” says Dediu. “They’ll want to grab the gold watch, put it on their wrist, take a photo with it, send it to their friends, and say, ‘I want to feel how a gold watch feels.’” Even beyond the mundane details of security and order, this hypothetical—no, this probable—is a big problem for Apple’s luxury ambitions.

It’s a clash of two cultures, says Dediu. To begin, if you’re willing to pay as much as $17,000 for a watch, you don’t want hundreds of photos showing a bunch of regular folk devaluing it on Instagram. But Apple Stores, the world’s most lucrative retail spaces, promote a culture of openness, not one of exclusivity like a boutique, which involves a lot of customer service coddling. “You feel like, ‘I want to be treated exclusively—I want to be the only one in this store and I want to have 3 sales assistants on me,’ which is how a luxury good would be sold,” says Dediu.
[fortune-brightcove videoid=4101326806001]

Indeed, actually selling the devices may prove to be tricky, both logistically and psychologically. In a recent New Yorker profile of Jony Ive, author Ian Parker wrote, “Ive later told me that he had overheard someone saying, ‘I’m not going to buy a watch if I can’t stand on carpet.’”

Don’t expect new flooring to roll onto Apple’s pristine showrooms any time soon. Instead, the carpets at Galeries Lafayette in Paris, Isetan in Tokyo, and Selfridges in London will pad the well-heeled looking for Apple Watch try-ons starting April 10. Two weeks later, the wearable will go on sale at Apple Stores in nine countries, as well as at select department stores and boutiques in major cities worldwide, including Colette in Paris, Dover Street Market in London and Tokyo, Maxfield in Los Angeles and The Corner in Berlin. The $10,000 rose gold Edition Apple Watch will also be available at select for Apple Store locations.

According to Apple representatives, the rest of us should prepare to make an appointment. It’s unclear whether Apple’s sales staff will treat the lower-priced Apple Watches like standard fare, or if Ahrendts will elevate their sales tactics to luxury levels. This would be particularly challenging, since Apple Stores see more than 300 million visitors per year—a figure that blows Burberry’s traffic away. To handle this load, according to The New Yorker, Ahrendts worked with Ive to develop a custom-made cabinet that displays the watches in a look-but-don’t-touch fashion.

That hardly seems luxurious. Then again, Apple may be trying to redefine what ‘luxury’ means.

“Luxury isn’t about exclusivity and something that only 1% of the population can afford—that is the old term of luxury,” says Dediu. “Luxury needs to be redefined as something that almost everybody consumes.” So while the average consumer may not be able to afford the luxury of a new Lexus, they can occasionally indulge in the luxury of a high-end restaurant.

In that way, Ahrendts may be able to provide Apple’s tech-loving consumers with the feeling of luxury—if only for a moment.