This is what white collar criminals do after prison 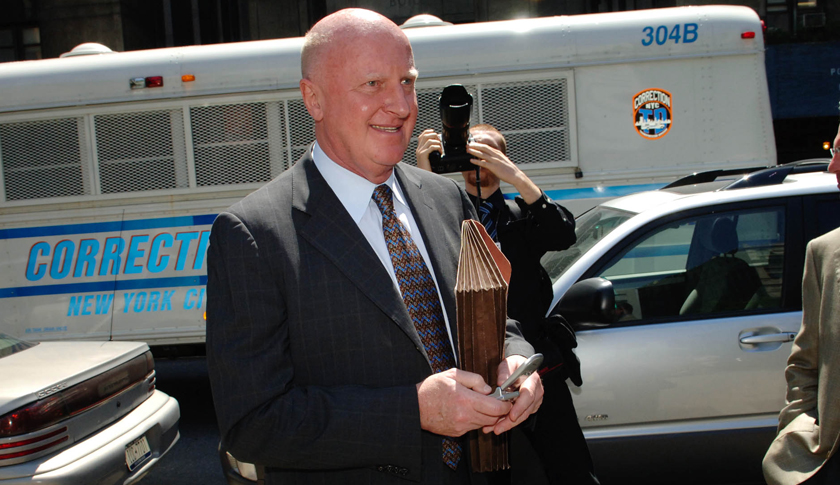 Congratulations, L. Dennis Kozlowski! Your years of imprisonment and penal supervision have come to an end and you’re a free man, your debt to society fully paid. Now go out there and be somebody!

For those who have forgotten, Kozlowski was CEO of the security systems giant, Tyco International, and the position allowed him to live large. According to The New York Times, this meant a $6,000 shower curtain in his home and a $2 million birthday bash for his second wife, featuring a sculpture of Michelangelo’s “David” that dispensed vodka from an appendage in its bathing suit area.

It all ended in June 2005, when he was found guilty of 22 counts of conspiracy, falsifying business records, grand larceny and securities fraud and sentenced to 8 1/3 to 25 years in prison. But that’s all in the past now, and Kozlowski must now undertake the herculean task of figuring out where he goes from here.

Luckily, he’s not the first white collar figure to endure a stay in the pokey, and he has several examples of others who went to prison, did their time, and emerged to write their lives’ next chapter. Fortune presents a few of them here, in the hope that they may give him some ideas.

There is perhaps no figure more emblematic of the Wall Street of the go-go 1980s than former stock trader Ivan Boesky. He was involved in insider trading, always an illegal enterprise, but was so shameless about it that the Securities and Exchange Commission was forced to pay him a visit.

According to The New York Times, Boesky was sentenced to three years in prison in 1987 for his shenanigans, but was released after serving only two. In 2012, his cousin Stuart Boesky told the Times that the disgraced stock trader was living in La Jolla, California and had just become a father.

Robert Brennan leaves the Federal Courthouse in Trenton, N.J. Monday, April 16, 2001, after the jury delivered their verdict in his bankruptcy fraud trial. The former penny-stock tycoon was convicted on seven of the 13 counts, the first charges carrying prison time Brennan faced in two decades of clashes with stock regulators. (AP Photo/Daniel Hulshizer)

Robert Brennan is best known as the man behind First Jersey Securities, a stock brokerage firm that promoted penny stocks to the elderly and gullible in a maneuver charmingly monikered “pump and dump.” The businessman, who can be seen in his helicopter in this 1985 commercial, was sentenced to nine years in prison for bankruptcy fraud and money laundering in 2001.

He was released in 2011 and confronted with the same question posed to so many of the formerly incarcerated – “where will I find happiness now?” In a turn of events befitting the last five minutes of “The Wizard of Oz,” he found it on his own doorstep, specifically by working as general manager of a private club he had once owned, the Due Process Golf and Horse Stables.

Hotelier and real estate magnate Leona Helmsley had a penchant for showering underlings with abuse, which earned her the nickname “The Queen of Mean.” Despite a personal fortune estimated at $8 billion at the time of her death in 2007 , she considered paying taxes a chore best left to “the little people,”  and it cost her big time, with a federal income tax evasion conviction that landed her in jail for 21 months.

After getting out, she kept a low profile and died at the age of 87. In her will she left $12 million to her dog, a Maltese named Trouble, while cutting two grandsons out of it entirely. The dog was cared for by one Carl Lekic, who told The New York Times that Trouble had a security team with an annual cost of $100,000, an $8,000 yearly grooming regimen and annual medical expenses known to reach $18,000. Lekic, on the other hand, was paid $60,000 a year.

The Helmsley Palace Hotel, once the jewel of the Helmsley hotel empire, was sold in 2011 to Northwood Investors LLC for approximately $400 million, and is now known as The New York Palace Hotel.

056720 06: Michael Milken stands November 2, 1988 in CA. Milken was the target of a ninety-eight count criminal indictment and a civil case filed by the Securities and Exchange Commission (SEC) for allegedly violating federal securities and racketeering laws. (Photo by John Barr/Liaison)

Like Ivan Boesky, Michael Milken was a poster child for the excesses of Wall Street. In 1990 he pled guilty to six counts of securities fraud and was sentenced to 10 years in prison, although his sentence was reduced to two years after he testified against former colleagues. He received a lifetime ban from the securities industry as a result of the guilty plea.

In 1991, one year after being released from prison, he founded the Milken Institute, a “nonprofit, nonpartisan think tank” that “believes in the power of capital markets to solve urgent social and economic challenges,” according to its website. The Institute was not, however, the financier’s first foray into philanthropy.

In the same month that he was released from prison, he was diagnosed with aggressive prostate cancer that had spread to his lymph nodes, a virtual death sentence. The experience inspired him to found the Prostate Cancer Foundation, which The Wall Street Journal called “the largest philanthropic source of funds for research into prostate cancer," and in 2004, Fortune ran an article about him called “The Man Who Changed Medicine.”

“Milken has managed to raise the profile of prostate cancer significantly, increase funding dramatically to fight the disease, spur innovative research, attract new people to the field, get myriad drugs into clinical trials, and, dare we say, speed up science,” the article said. Milken’s cancer is now in remission, and the Milken Institute holds an annual ideas conference.

On a sunny summer’s day in 2005, Richard Scrushy must have felt as though he had dodged a bullet. The founder and former CEO of the hospital operating company HealthSouth had been indicted on 36 charges relating to a $2.7 billion accounting fraud perpetrated within his company, and he was acquitted of all of them. But the reprieve was short-lived – four months later, he was convicted of bribery charges and sent to prison.

Scrushy became a free man in 2012, and he hoped to resume the executive duties that had brought him so much happiness in the past. No less an organization than HealthSouth, the company he had once lorded over, put the kibosh on that.

"There are those whose past actions have been so abhorrent, their abuse of power so extreme, the damage inflicted on the innocent so great, that never again should they be put in a position to repeat them," the company said. "Richard Scrushy is one of those individuals." So that was out.

Luckily, Scrushy relied upon his outside-the-box thinking and began a new life as a public speaker. His website describes him as “a dynamic risk taking entrepreneur with a powerful track record” and provides a link to purchase an autographed copy of his book, “When Building a Billion Dollar Company Here Are a Few Things to Think About.”