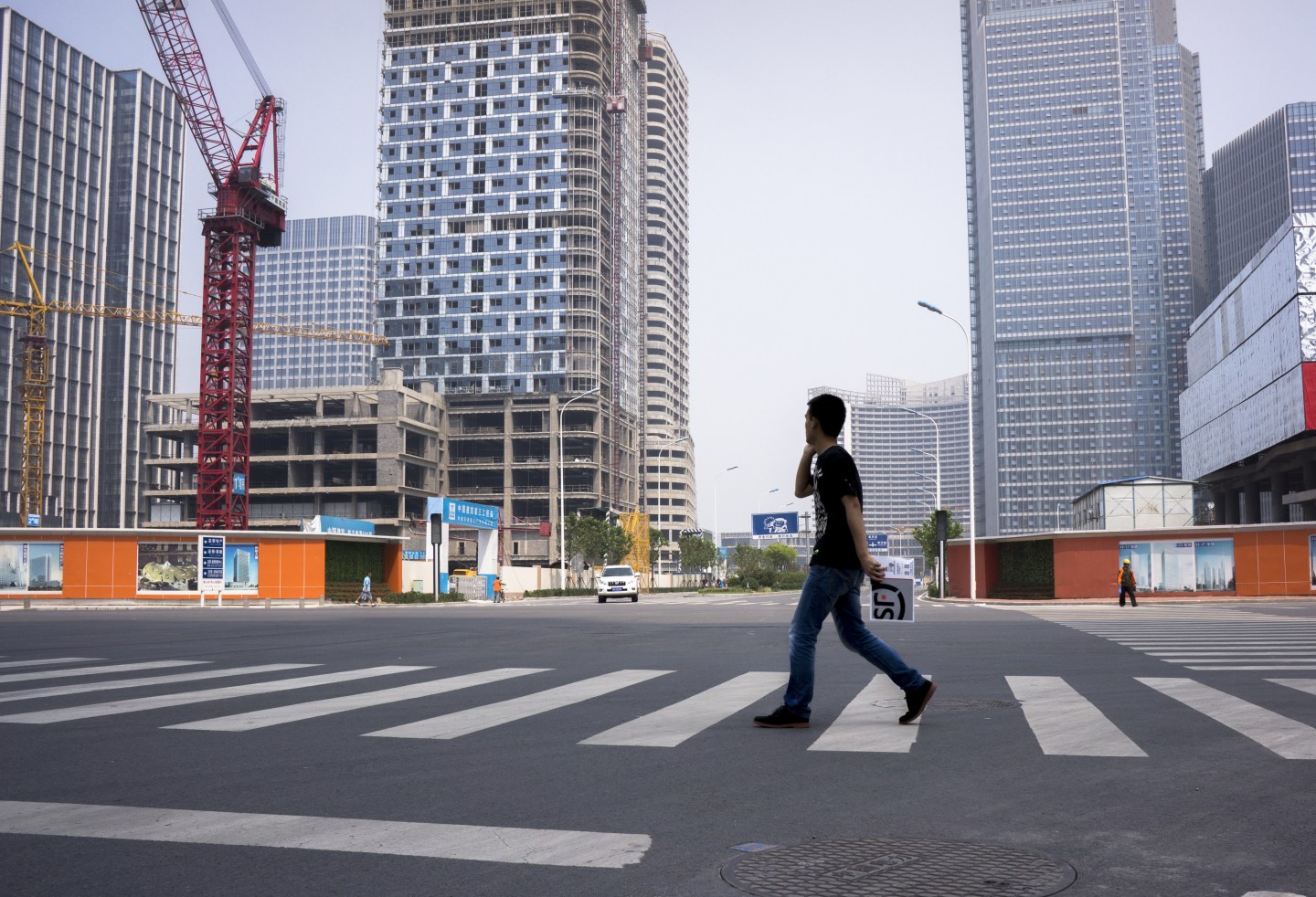 YUJIAPU CBD, TIANJIN, CHINA - 2014/08/20: Construction sites and vacant streets in Xiangluo Bay. Yujiapu & Xiangluo Bay, a new biggest central business district under construction in Tianjin , has been expected to be China's Manhattan, now is reported as a Ghost city. The nation's slowing economy is putting the project into jeopardy. (Photo by Zhang Peng/LightRocket via Getty Images)
Photograph by Zhang Peng — LightRocket via Getty Images

Expect to hear a lot more about China’s local government debt mess this year. The latest estimates put local government borrowing at more than $3 trillion—or a third of its entire economy. That’s unsustainable, and China’s central government is beginning to take steps to fix the problem before full-scale defaults.

Over the weekend, China’s Ministry of Finance said $160 billion of high-interest local government debt could be refinanced via lower-cost municipal debt, advancing a plan announced last summer. The authorities said savings would reach at least $6.5 billion a year, allowing governments to turn around and keep spending to help the country reach its GDP growth target of 7% this year.

The swap is being called a big deal in China, one that acknowledges how easily city and provincial governments got round previous rules aimed at keeping a lid on borrowing, and tries to put the whole problem on a footing that is both legally clearer and financially more solid.

China’s counties and cities are saddled with costly debt after rushing to build roads, bridges and tunnels during the 2008-09 stimulus and over the past 20 years.

That debt is coming due. The fear is that a wave of defaults could follow.

In a February report from McKinsey entitled “Debt and (not much) deleveraging,” the authors explain “if local government financing vehicles are unable to repay their loans, the losses would  be felt throughout the banking system.” The big four state-owned banks in China, along with city commercial banks and other financing companies, have $900 billion on the line, according to McKinsey.

The local debt is costly. A government audit last year found that 20% of recent loans issued to local government’s special vehicles were used to pay down old debt. Forty percent of repayment funds were raised from local governments selling land.

Local governments were well aware that land sales are themselves unsustainable, but they turned to them because there were few other ways of raising money. The hope was that they would be able to pay off the debts with future tax receipts.

China’s premier Li Keqiang told the World Economic Forum in Davos earlier this year “there will not be a regional, systemic financial crisis” in the country. Credit agencies included Moody’s say his statement serves as evidence the central government won’t allow local government defaults. McKinsey concludes the central government has enough resources—after years of trade surpluses—to tackle the issue. Where it ends is the question investors are asking.

Guo Shuqing, a provincial governor in coastal Shandong, told reporters over the weekend that cities in his province need to sell assets to pay off debt. Shandong province is the second-least indebted province of China’s thirty. His comments were alarming for what wasn’t being said by others.

Allowing local government to refinance high-interest loans through the municipal bond market—the market they should have been accessing from the start—is one step toward delaying, even avoiding, the need for Beijing bailouts. It may even be a decisive moment in meeting China’s declared aim of letting market forces play a ‘decisive’ role in the economy in the medium term.

But the risk is that the opposite may happen, as Beijing steps into the fray to rescue an unknown number of local debtors, leading to a greater centralization and politicization of economic decision-making. That might be just as worrisome for those concerned about China’s debts as an actual default.