Another slap to Tsipras as the ‘Troika’ heads back to Athens 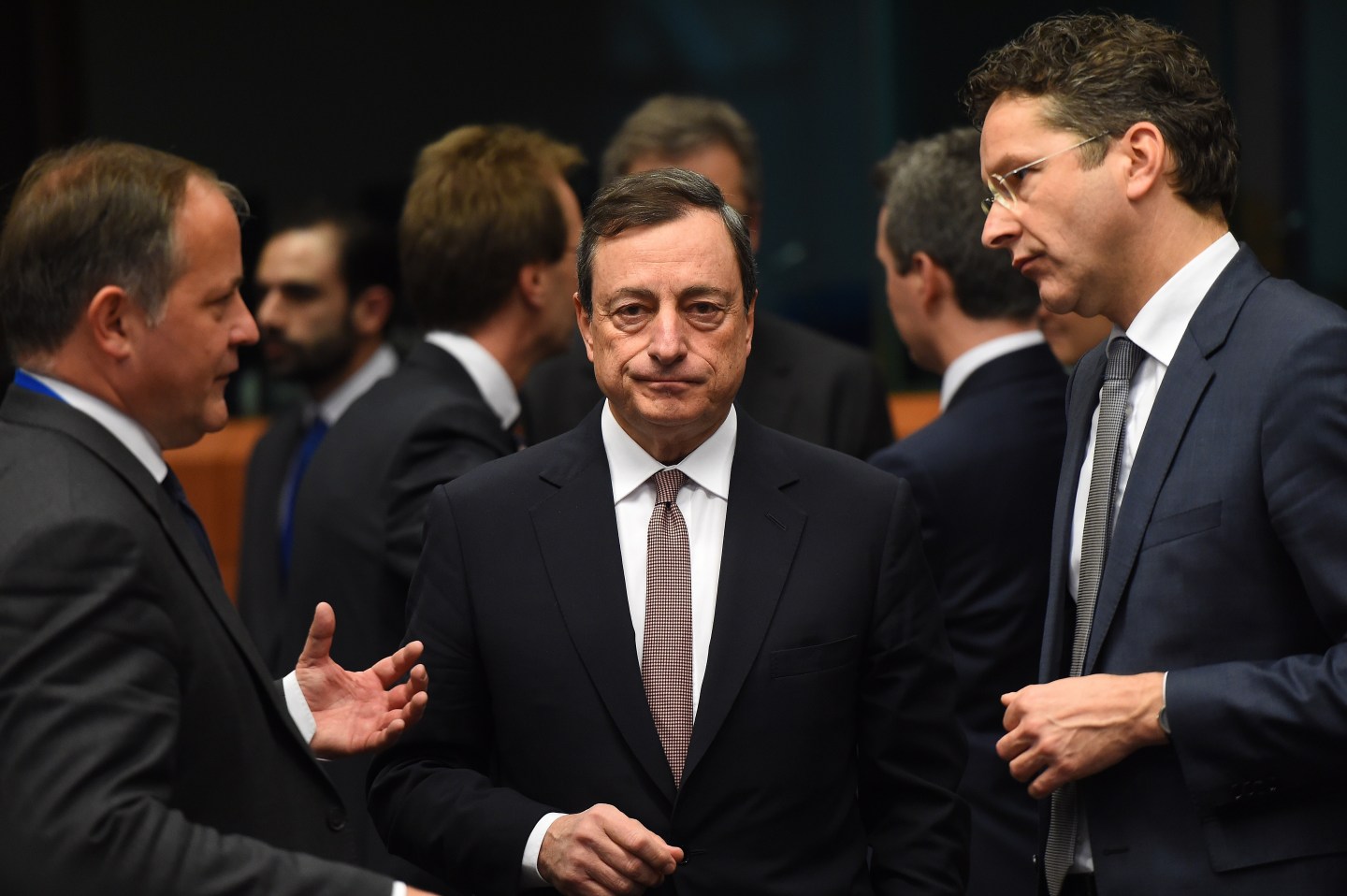 Eurogroup President and Dutch Finance Minister Jeroen Dijsselbloem (R) speaks before European Central Bank President Mario Draghi (C) on March 9, 2015 during a meeting of Eurogroup finance ministers at EU headquarters in Brussels. European finance ministers urged Greece to stop wasting time in talks on its crucial bailout as debt-stricken Athens warned of a possible referendum if its reform plans are rejected. Dijsselbloem said Greece had to make concrete progress if it wanted financial aid to be extended through the summer. Greek Finance Minister Yaris Varoufakis was presenting Athens's latest plans for reforms at the meeting in Brussels, which among other steps include using tourists as amateur sleuths to crack down on tax dodgers. AFP PHOTO / EMMANUEL DUNAND (Photo credit should read EMMANUEL DUNAND/AFP/Getty Images)
Photograph by Emmanuel Dunand — AFP/Getty Images

Greece’s creditors are set to resume on-site inspections of the government’s books in Athens Wednesday, in another big climbdown for the left-wing government in Athens.

Prime Minister Alexis Tsipras has repeatedly vowed to end what he calls the humiliation of the country at the hands of the “Troika” of officials from the European Commission, International Monetary Fund and European Central Bank.

But at a meeting of finance ministers Monday, Greece accepted that there was no way round allowing them back as a price for continued access to the funds in the country’s bailout agreement.

The meeting was the latest in a series of bruising encounters for Greece’s finance minister Yanis Varoufakis, whose proposed amendments to part of the bailout deal were discussed for a mere 30 minutes before the meeting moved on to other business.

The Eurozone is becoming increasingly impatient with Athens, with ministers starting to abandon the euphemisms they had adopted to spare Greek sensibilities in the immediate aftermath of the Syriza party’s election victory in January. At previous meetings, other ministers had gone out of their way to suppress the word ‘Troika’ (giving rise to the mocking Twitter hashtag #TIFKAT – The Institutions Formally Known As the Troika).

Even on Monday, Eurogroup chairman Jeroen Dijsselbloem was still sugar-coating reality, referring to them as “The Institutions” and their visit as ‘technical talks’, and talking up the fact that some of the discussions about implementing the bailout will in future take place in Brussels, rather than in front of an outraged Greek public.

French Finance Minister Michel Sapin also tried to keep up the appearance of togetherness, stressing that, “in politics, the words are important.”

Varoufakis, at his press conference, continued to insist that “the idea of troika visits, comprising cabals of technocrats from the three institutions in lockstep walking into our ministries and trying to implement a program which has failed…is a thing of the past.”

Not so, said others. Spain’s Luis de Guindos, who has already had his share of run-ins with Varoufakis, dismissed the whole issue as ‘semantics’, while Germany’s Wolfgang Schäuble repeatedly and deliberately referred to the Troika in comments to German television.

Schäuble may have been irritated by knowledge of a documentary aired on Monday by German state TV channel ARD in which Varoufakis, in an interview apparently taken before he was appointed Finance Minister, repeated that Greece won’t pay its debts in full.

“Clever people in Brussels, in Frankfurt and in Berlin knew back in May 2010 that Greece would never pay back its debts. But they acted as if Greece wasn’t bankrupt, as if it just didn’t have enough liquid funds,” Varoufakis told ARD, according to Reuters.

As Finance Minister, Varoufakis has promised that the Greek government will honor all of its debts in full and on time.