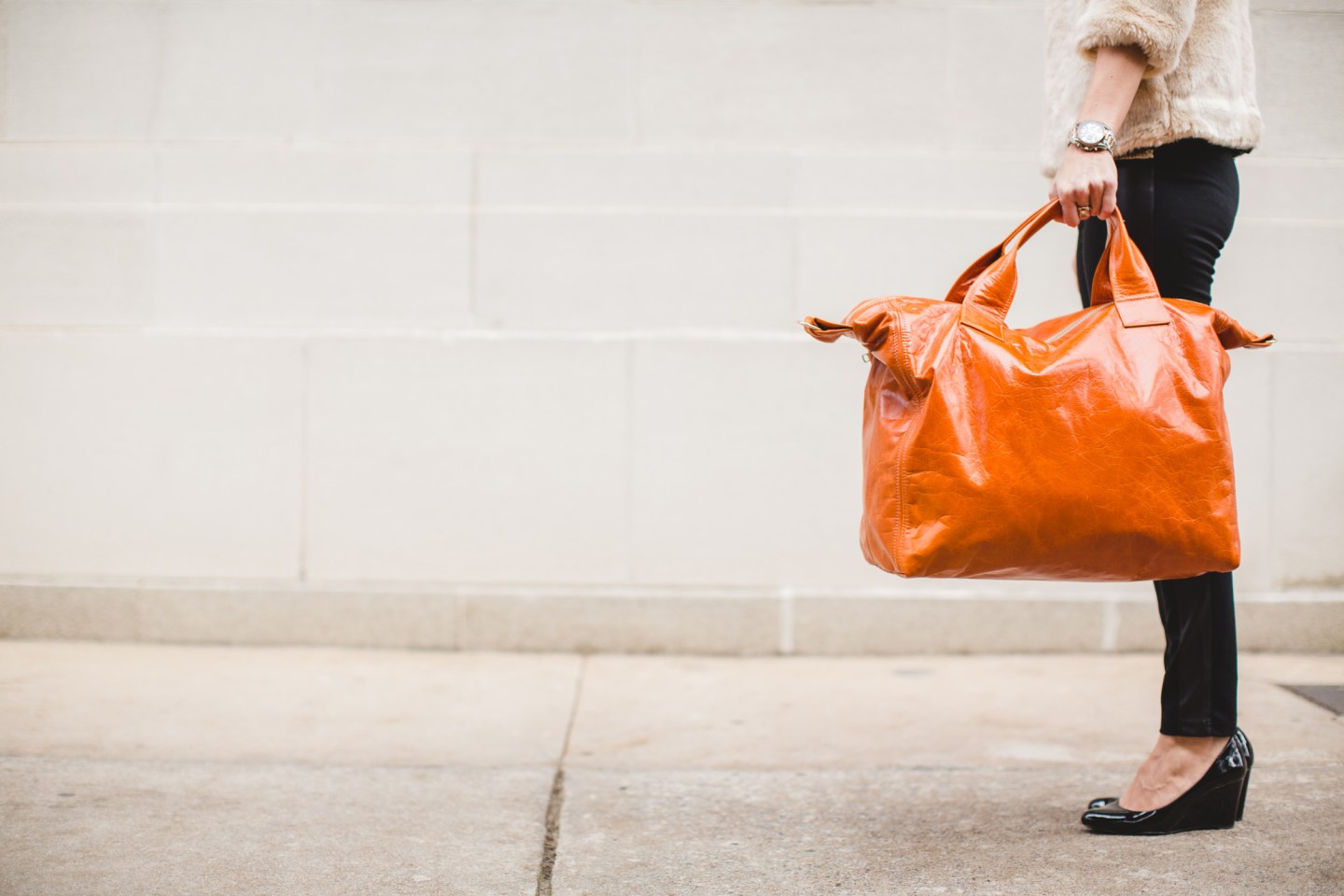 Two years ago, Elizabeth Seeger was at The Cocktail Club in Charleston, S.C., for a bachelorette party when she approached a stranger.

“I know this is going to sound strange,” she said to the woman, “but I made your bag.” Naturally, the woman was thrilled to meet the maker of her gold faux crocodile clutch. She insisted on taking a picture with Seeger, but what perhaps she didn’t know was the delight Seeger experienced in seeing one of her best-sellers out in the world.

“The best thing about what we do is seeing someone you don’t know carrying one of your bags,” said Seeger, founder of Satchel, a handmade leather bag business with a boutique and workshop in downtown Savannah, Ga.

Having grown up in a family in which “all the men were pilots and all the women sewed,” Seeger learned to work with fabric at a young age. She’d take heavy scraps from her mother’s furniture slipcover work and whip up a handbag to take out that same night. As she came to appreciate having custom-made bags, she also saw the growth of designer labels—everywhere.

“It’s the Louis Vuitton culture,” Seeger said. “Every company turning their logo into initials and stamping it on everything.” She said now that the price point of designer merchandise makes it more accessible, it’s reached a tipping point. “People don’t want the logo on the outside anymore,” she said. “They want a quality product, and they’re willing to pay more for it. If someone wants the brand name recognition, they’re not my customer.”

To be sure, many Americans still favor a prominent, mass produced label. But for those who can afford a high-quality handmade piece created just for them, old-school craftsmanship holds the ultimate bragging rights.

In a shift reminiscent of bygone days, when one might have taken the carriage into town to see the dressmaker or cobbler, a number of small, independent crafters across the country are selling their wares to discerning customers. They’re struggling to keep up with demand.

Satchel opened eight years ago and moved into a larger, high-ceilinged retail space last summer. The front of the boutique is what one would expect of a handbag showroom—simple, classy displays with metallic and distressed leather (a pink purse with fringe, $115, a game belt for duck hunting, $495) and a couple sofas.

A large counter divides the space, behind which visitors see three industrial sewing machines that could sew right through your finger. Farther back are messy cubbies filled with fabric and leather in every color—mostly cowhide but also from animals ranging from python to pig—set aside for orders.

Some customers buy existing bags and wallets, while others love the design process and pay extra for a prototype with, say, more pockets or a wider strap. If Satchel ends up carrying the custom bag in its collection, it will be named after that customer. One of Seeger’s first styles was made from her father’s old leather jacket; it’s now a best-seller, still called the Dad’s Jacket bag.

“It’s not common today, and it’s definitely what makes us successful,” Seeger said, of crafting a product the old-school way. She said customers find appeal in “locally-made” as well as the opportunity to customize. Her everyday handbags average $250 to $450, but exotic hides and custom pieces can drive prices much higher; one custom client bought a $1,500 duffle and $2,400 garment bag to match his Range Rover.

Among the challenges, Seeger said, is finding time to run the business—which operates without a computer system. Seeger writes receipts by hand and doesn’t know how many bags she sells each year—only that it’s more than the previous year. And hence, the most critical matter: keeping up with growth. She’d like to expand to other showrooms, add a shopping cart to her website and fulfill custom orders faster than their promised four-to-six-week timeframe. She fantasizes about cloning herself and her “girls” because she has a hard time finding the right people to train in all aspects of the business. The perks are enviable: Seeger said she makes her staff lunch in the shop kitchen almost daily and frequently serves champagne at 5:30. “And,” she added, “they get great bags.”

This refrain—overworked and not finding the right help—is heard time and again from those crafting merchandise by hand. Erik Desjarlais founded Weft & Warp Seamster/Intervale Leatherworks in New Gloucester, Maine, after he retired from the restaurant business. He was an upholsterer’s apprentice when he was a boy and had inherited his grandfather’s industrial sewing machine. In 2011, he made a leather knife roll for his wife, also a chef, and with the blessing of social media, a business was born.

Today, Desjarlais makes aprons, tote bags and knife rolls—which cost up to $350, but that’s a reasonable investment for chefs who have thousand-dollar, custom-made knives. He works out of a 500-square-foot converted chicken barn. Eighty percent of his orders come from professional chefs or their significant others. It’s not uncommon for him to have large orders from restaurants, purchasing dozens of aprons at a time.

“[The restaurant] Toro in Manhattan recently placed an order for aprons, and they didn’t want it to be made by a hipster in Brooklyn,” Desjarlais said. “They wanted it to be made by a guy in the woods in Maine.” He said customers like the image of a craftsman hand-stitching their product, and they want to buy something they know won’t fall apart. He says his products are utilitarian and will still be relevant in 50 years.

Desjarlais does have visitors, but they usually have trouble finding his workshop. He’s considered a retail space although hasn’t yet justified the rental expense. In the meantime, he struggles with the successful artisan’s dilemma: how to keep up with orders and pass along his craft to others who can help.

Kyle Hix also opened his business, Hix Design, in 2011. He began making custom motorcycle seats and automotive interiors out of his Dallas workshop. But a skiing injury last year forced him to scale back, and he’s found himself making $1,800 – $2,400 leather bags. The motivation was his purchase of a $600 Cole Haan leather duffle, after which he felt “super buyer’s remorse.” That same day, he drew sketches and made a prototype of a better-built bag. He uploaded some photos, and the business took off.

“What I want to make is what I’d want in a bag—sturdy, well-made, really high-end but with minor imperfections,” Hix said. Each bag takes 16 hours—about six weeks from the order date. He said Instagram is tailored to promote handmade merchandise, and this is where many of his customers find him. He’s worried about scaring people away if he lists the bag and its price online. So he does all his business through email inquiries and doesn’t have time for visitors at his shop.

“I’m only one guy,” he said. “There’s only so much I can do. When the website’s up, I’ll show people the whole process.”

In Grand Rapids, Mich., Rusty Zylstra opened Mercy Supply Co. in 2009, making bags in a friend’s backyard shed. Now he and his eight industrial machines work in a 1,700-square-foot warehouse, a former La-Z-Boy factory that houses other artisans.

Zylstra—who has one full-time employee and part-time help on the business end from his wife—began with only custom work. But he found he was spending countless unbillable hours emailing with clients who weren’t clear about their preferences. Ultimately, he decided to streamline the process by crafting what he wanted to make—simple bags, without zippers (they inevitably break), built to last.

“My customers are people who like rugged, durable stuff,” Zylstra said. “Our bags are twice as thick as Levi’s and Carhartt. People are tired of having bags that break. That’s the problem with manufacturing on a big scale—some things slip through the cracks, and sometimes quality is sacrificed.” He said his material is guaranteed to hold up, while a $20 backpack from Target is “guaranteed to fail.”

Although his shop is located in a dicey neighborhood, his out-of-town customers often come to look at bags and buy from the shop (his bags are also sold in 10 boutiques in New York and California). Among his products are the Courier Bag ($350, with solid brass hardware) and the Mercy x Madcap Coffee Kit ($250, a collaboration with a local coffee company).

“Bigger brands can have the presentation of an Americana feel, and it’s not even made in the USA,” Zylstra said. “I think people genuinely do care that it’s made by a small company, in a small workshop.”