Who is the <i>real</i> Montgomery Burns? 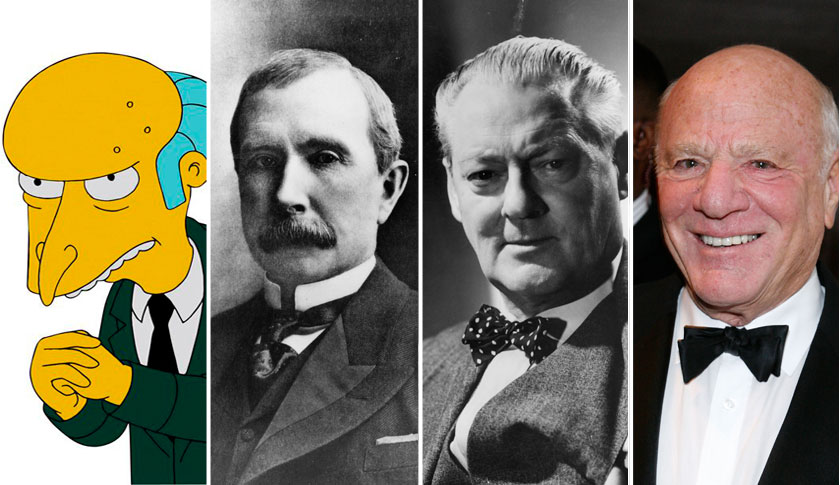 When the original Dallas exited prime time in 1991, the television world had a critical opening to fill. It needed a wizened, megalomaniacal nuclear power tycoon to supplant dastardly wildcatter J.R. Ewing as TV’s reigning emblem of corporate greed. Who filled that void? C. Montgomery Burns of The Simpsons.

For years, rumors were rampant that Fred Olsen, a secretive Norwegian oil magnate, inspired the Burns persona. Magazine stories and even websites devoted to Simpsons lore regularly made the connection. It’s easy to see why. Olsen’s bald pate and narrow visage bear an uncanny likeness to the Burns physiognomy, albeit in a wildly caricatured version.

But in my recent story on Olsen, “The Crazy, True-Life Adventures of Norway’s Most Radical Billionaire,” I put that rumor to rest. Through his extremely helpful press representative, Simpsons creator Matt Groening stated for the record that articles claiming Olsen as a wellspring for the Burns mythology, either physically or otherwise, are “utterly false,” and that any resemblance is a “coincidence.”

Looks aside, this reporter could hardly imagine any corporate chieftain less like Montgomery Burns than the admirable, 86-year old Olsen. Burns, for example, assails environmentalists as “tree huggers,” and even threatened to turn all the trees in the The Simpsons’ hamlet of Springfield into a single, luxury toothpick. His only “green” feature is the color he glows on account of his exposure to radiation.

By contrast, Olsen campaigns passionately to stop drilling and shipping in the Arctic, warning that the fracturing of the polar ice caps will hasten global warming. “The elites won’t be able to escape to another planet like modern-day Noahs,” he warns.

Burns, who pretty much deplores the modern world, drives a 1936 Stutz Bearcat, attired in goggles and driving gloves. The forward-thinking Olsen motors to work in a Tesla S Class.

Burns is a vulgarian who missed an opportunity to buy Picasso’s masterpiece Guernica for a song, and instead got rich by purchasing the rights to a song, “White Christmas.” His safe is hidden behind a near-copy of Manet’s “Bar at the Folies Bergere,” altered so that Burns’ own face has replaced the barmaid’s.

Olsen’s family, meanwhile, are art connoisseurs who raised the world’s appreciation for Norwegian master Edvard Munch. When the Nazis forced Germany’s museums to sell their Munch paintings in the late 1930s, Fred’s father Thomas rescued dozens of his works by bringing them to Norway. Thomas Olsen commissioned Munch portraits of his wife Henriette, and two Munch paintings hang in Fred’s home in Oslo.

Olsen is great fan of figureheads, the decorative sculptures that graced the bows of ships in the 19th and early 20th centuries. Figureheads of such historic figures as Cyrano de Bergerac, the Queen of Sheba, and Edward the Black Prince are planted in Olsen-designed parks in Norway, and loom over the swimming pools on his cruise ships.

While Burns is physically feeble, Olsen is vital. On the golf course, his wife drives the cart, and Fred chases behind on foot. Asked a typical score, he states, “I have no idea.” Asked further if he ever keeps score, he fires back, “Why should I?”

Burns is un-mirthful, except by mistake. Olsen can be funny. When he informed this reporter that he’d read a story I’d written on Pope Francis, I joked, “Maybe I can write about two highly ethical businessmen, the Pope and you.” Olsen’s retort: “Don’t overestimate me!” Among his office heirlooms is a drum from an 18th century British naval ship that Olsen, brandishing a baton, pounds for fun. “I’d like to use it to summon my crew, like they did on the old ships, but the insulation here is too good!”

So, who is Burns really based on? Groening’s representative says the best source is a TV Guide story from October 2000. In it, Groening states that the twin models for Burns’ personality are real-life oil tycoon John D. Rockefeller, and Henry Potter, the miserly banker played by Lionel Barrymore in the 1946 film It’s a Wonderful Life.

How about the name? Groening had a childhood friend who lived across the street from a Montgomery Ward department store. Next to the store was a historic log cabin that burned down. Groening combined “Montgomery” with the fiery fate of the cabin to hatch Montgomery Burns. His real first name, Charles, is taken from Charles Foster Kane, the newspaper magnate from the movie Citizen Kane.

In the TV Guide story, former Simpsons supervising director David Silverman reveals the inspiration for the Burns’ look. It’s based on Barry Diller, who was running Fox Broadcasting when The Simpsons debuted on the network in 1989. Burns’ body language is modeled on a praying mantis.

Other than the lack of locks, it’s hard to find a resemblance between Diller and Burns. Fortune reached out to Diller, since he’s the only living Burns inspiration. The current CEO of IAC/InterActive wasn’t available for comment, so we don’t know if he sees a resemblance we’re missing.

When it comes to educational background, Diller has more in common with Olsen than with Burns. Neither attended college. The former studied the entertainment business in the mailroom, the latter learned to design ships by laboring in the engine room of cargo vessels. (Also like Olsen, Diller has a fondness for figureheads. In fact, he commissioned one modeled on his wife Diane to be installed on his yacht.)

All of this puts some distance between Burns and the rumored, and supposedly real, models for his legendary look. After all, Montgomery Burns is a Skull and Bones-authenticated, “common man” despising super-snob, whose off-screen alma mater, we’re sure, wishes he were anything but a proud, pompous Yale man.