Guns are barreling back, thanks to women 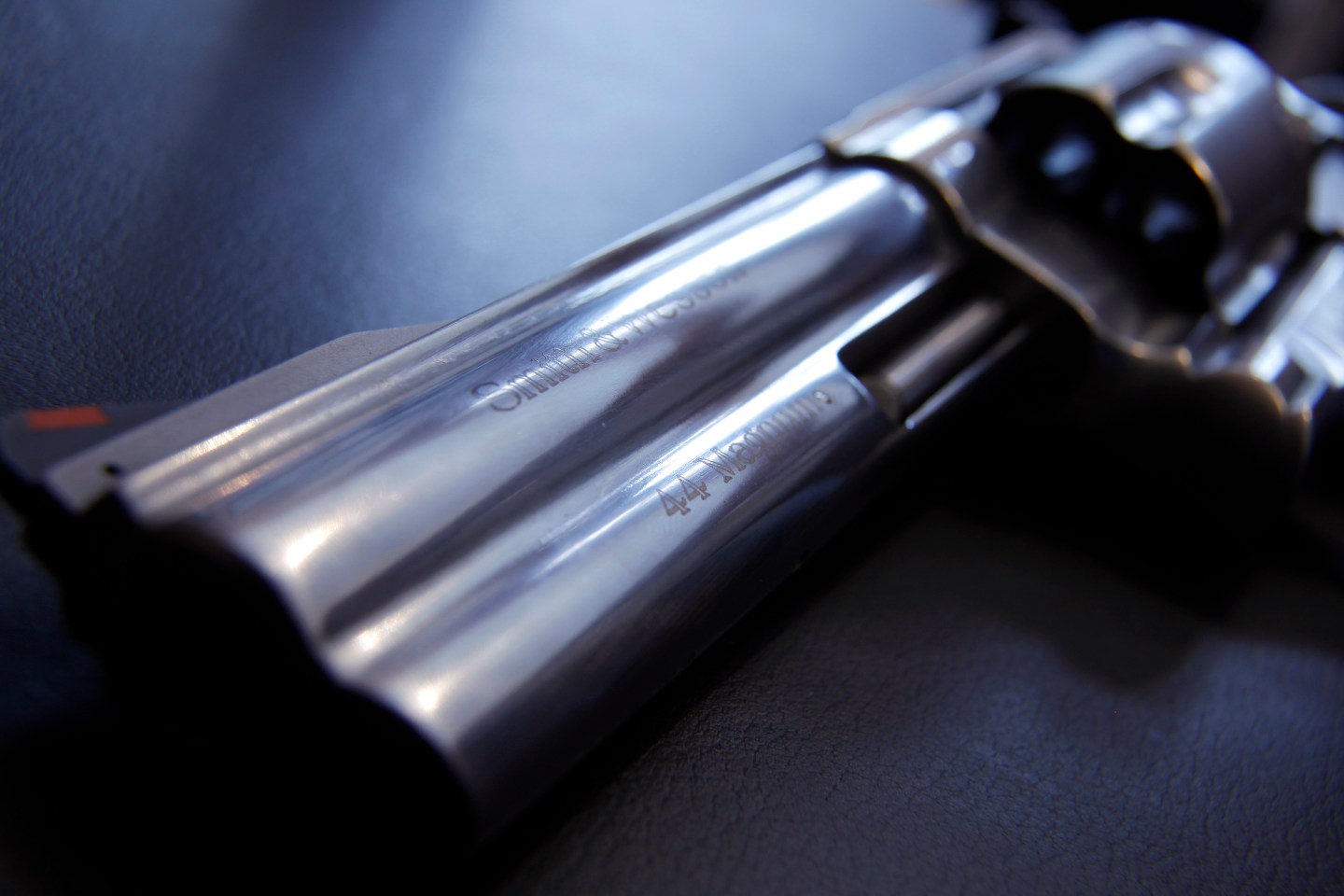 The horror that follows a mass shooting event does not last long in the public memory. And that’s good news for the firearms industry.

Smith & Wesson, one of the three biggest U.S. gunmakers (along with Sturm, Ruger & Co. and privately held Freedom Group, which owns Remington), beat analyst expectations this week with its third-quarter earnings. Quarterly revenue of $130.6 million was down nearly 11% from the third quarter of last year, but that still topped predictions. Across the board, indicators that were down were not down by as much as expected, and the market responded: Smith & Wesson stock shot up nearly 10% on Tuesday after the earnings announcement. The stock is up nearly 5% in the last year, and 45% in the past two years. It was, in all, a very good earnings report for the gunmaker.

Why is Smith & Wesson beating expectations? CEO James Debney chalks it up to a “normalizing” market.

“Our third quarter results reflect the successful navigation of a normalizing firearm market following an earlier consumer surge in firearm purchases,” said Debney in a statement. “Sales in our firearm division exceeded our updated expectations, reflecting solid orders from distributors and key retailers.”

But it’s more than that.

Yes, the firearms market has normalized. After the Sandy Hook Elementary School shooting in December 2012, President Obama’s vow to cut down on ownership of assault weapons (the industry calls them “black rifles”) led to an explosion in sales. The irony was obvious: the president wanted to reduce ownership of firearms, and instead it created a boom.

“It’s like somebody saying, ‘We’re going to ban waffle irons,’ and you don’t even want a waffle iron, but you go out and buy three of them,” says Brian Ruttenbur, an analyst with CRT Capital. “The best thing for gun sales has been the Obama administration. It’s reverse logic.”

Dubbed the “Obama gun bubble,” it lasted nearly two years, and then burst last summer when both Ruger and Smith & Wesson reported dismal earnings. Now, sales are up to a normal level, pre-boom. In addition, handguns didn’t get hit nearly as hard as rifles did; Smith & Wesson is mainly a handgun maker.

It helps gunmakers that Sandy Hook is a distant memory. Analysts say the negativity around gun ownership that resulted from the Connecticut tragedy has worn off. It’s the typical cycle that results when a shooting occurs — sales take a hit, then crawl back once the public moves on.

The numbers prove that. The FBI’s most recent NICS report (National Instant Criminal Background Check System), which tracks background checks and thus reflects gun demand, showed an 8.4% rise year over year in January. And January 2015 was the second-highest January ever.

There is another factor helping Smith & Wesson (and its biggest competitor, Ruger, whose shares are up 5% in the past week after its own sunny earnings report): Interest in shooting for sport — that can mean target-shooting or hunting — has risen steadily recently. And the main group fueling this growth? Women.

According to the National Sporting Goods Association, from 2001 to 2013 there was a 60% rise in women who participate in target shooting. On the hunting side, there was 85% growth. Sales have risen along with the rise in the activity, and the firearms industry overall has enjoyed 8% CAGR (compound annual growth rate) over the last 30 years.

“The biggest driver is women getting into the shooting sports, and practicing concealed carry,” said Ruttenbur. “When you look at the demographics, what has happened is there’s been a rise in women being head of the household. So it started with concealed carry, as a protection thing, but now women are going and taking the family to the range for fun. You don’t see it in the major cities, but go 10 miles outside the city, and gun ownership goes through the roof.”

Analysts also give some of the credit to Smith & Wesson’s management. Cai von Rumohr, a managing director with Cowen & Co., says that CEO Debney, who took the reins in 2011, has done well.

“The prior management had done a number of acquisitions that did not work out,” says von Rumohr. “He has stuck to the core and improved new product introduction. There’s been no gaffes on the manufacturing side, and they’ve done two smart acquisitions.”

Those acquisitions were of Tri Town Precision Plastics, a producer of plastics that already counted Smith & Wesson as its biggest customer (a vertical integration play) and Battenfeld, which makes accessories. Both purchases came last year. “The old management attempted to deal with the decline by cutting prices to move more inventory,” says von Rumohr. “These guys said the focus has to be not on cutting price but getting inventory down, which will stabilize demand. And it has.”

The gun market will be an interesting one to watch later this year, as presidential campaigns heat up, since sales in the space are so tied to politics. When Obama was first elected, gun sales rose because gun lovers feared a crackdown. But Ruttenbur says that at the time, “many people said that if Hillary [Clinton] had been the one elected, sales would have really gone crazy.”

In other words, Smith & Wesson may be rooting for a particular candidate in 2016.