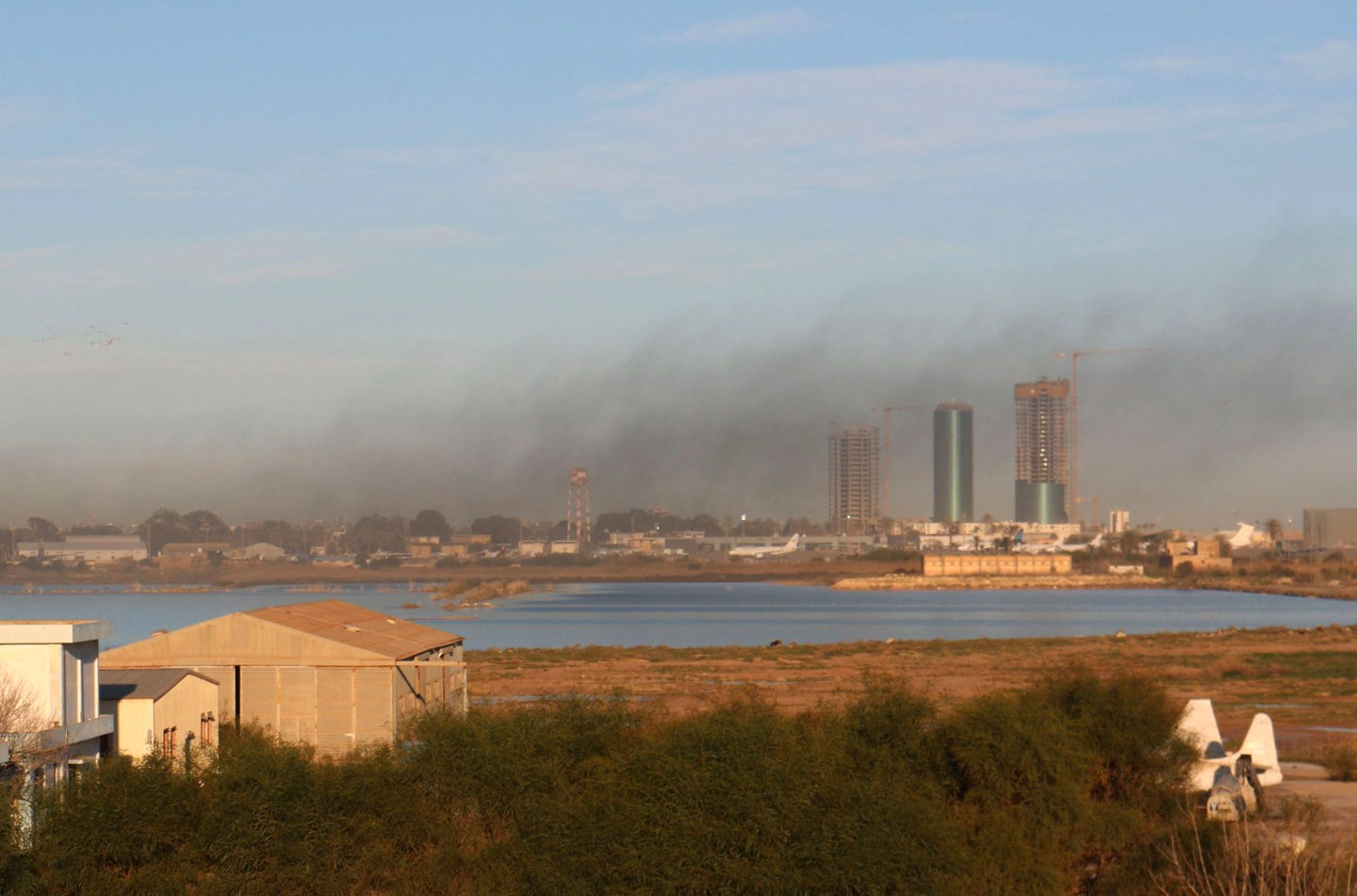 Smoke rises after an airstrike hit Maitiga airport early Thursday morning, in Tripoli March 5, 2015. Fighting and air strikes have escalated even as the United Nations prepares to restart negotiations on Thursday between two factions in an attempt to broker a ceasefire, form a unity government and put Libya back on track to stability. REUTERS/Hani Amara (LIBYA - Tags: POLITICS CIVIL UNREST TRANSPORT) - RTR4S4UW
Photograph by Hani Amara — Reuters

If anyone wondered just how serious the turmoil was in Libya, this week’s attacks on its oil fields have likely erased those doubts, and left Western oil companies with big investments in the country wondering whether one of their more promising prospects in Africa is destined for a long and bitter war.

These past few days have placed Libya’s already precarious security on the brink of collapse. Before dawn on Wednesday in the country’s central coastal region, groups of armed fighters claiming allegiance to the Islamic State, or ISIS, stormed two oil facilities, each jointly operated with Libyan and Western oil companies: Mabruk, a joint venture with Total; and Bahi, partly operated by a U.S. consortium consisting of Marathon Oil (MRO), Hess (HES), and ConocoPhilips (COP). Militant gunmen then moved to a third oil field, where it fought a fierce overnight battle against local militia. While the rebels in power in the capital Tripoli attempted to bomb the militants around the oil fields, rival groups traded air attacks on each other’s airports. On Wednesday, Ibrahim Dabbashi, Libya’s ambassador to the U.N., pleaded with the Security Council to lift the international arms embargo against his country, warning that unless Libya receives fresh weaponry, ISIS will continue to use the perilous power vacuum to expand its operations. “If you don’t have enough fighter jets and surveillance airplanes you cannot deal with this problem,” Dabbashi told the U.N.

But even with fresh arms, it could take a bitter battle to dislodge the myriad militant groups in Libya. The country is a tantalizing target, not only for business, but also for armed militants of all stripes. The vast desert country has Africa’s biggest oil reserves — about 48 billion barrels, according to the latest U.S. Energy Information Administration (EIA) estimates. Plus, it has the continent’s fourth-largest gas reserves, with Europe its long-standing customer, and Italy — Libya’s old colonial power across a narrow strip of the Mediterranean — especially reliant on Libyan gas imports. Moammar Gaddafi’s critics nicknamed him “the mad dog of Africa,” and his bizarre political dictates included a ban on any regular political organizations. Yet through Gaddafi’s iron-fisted rule, Libya’s oil facilities were tightly managed and controlled by the National Oil Corporation (NOC), even during the period of E.U. and U.S. sanctions against the firebrand leader. When the U.S. and Europe finally lifted their embargoes against Libya in 2004, Western oil companies raced back to Tripoli to resume their operations, which they had left in the hands of fairly capable Libyan managers, and to sign fresh exploration deals.

Contrast that to today. Exactly four years after NATO jets launched its bombing campaign again Gaddafi’s forces, collapsing his 42-year dictatorship in just a few months, Libya has no functioning national government, national intelligence service, or national army — no institution, in fact, capable of protecting one of Africa’s richest assets from end to end. “After the Arab Spring we were left with very little central government control,” Bassam Ghellal, a Libyan, and managing director of the Dubai-based business-security consultancy Whispering Bell, told Fortune by phone. For ISIS and its sympathizers, the upheaval has presented rare opportunities for attack. “This is where these groups thrive,” Ghellal says.

With militia groups conducting regular incursions against oil terminals and pipelines over the past several months, Libya, a key Opec member, has seen its oil production plummet from around 1.6 million barrels a day in 2010, to around 750,000 barrels a day last November, down again to 325,000 barrels a day in January, and up to around 500,000 barrels or so this month, according to the NOC’s estimates. Since hydrocarbons account for about 95% of export revenues, the rival governments are barely able to pay civil servants or soldiers. “It is hard to overstate how important the oil and gas sector is to Libya,” Geoff Porter, CEO of North African Risk Consulting (Narco) in New York, said in a note to clients in late February. “Without oil there are no jobs. Without oil there is no food. Without oil there is potentially no Libya.”

Thanks to months of fighting between rival forces, Tripoli’s international airport lies in ruins. Last August, Libya Dawn, a coalition of local militia forces that had sprung up during the 2011 war to fight Gaddafi’s forces town by town, seized the capital and installed themselves in power. The elected government (the only one with U.N. recognition) fled to the city of Tobruk, 800 miles away, across the Egyptian border, where it now runs the eastern half of Libya. With most Western embassies shuttered in Tripoli, diplomats operate in a kind of self-imposed exile from nearby points like Malta.

But it is not only the oil industry at risk, however.

To gauge how risky non-oil investments in Libya are, consider the sobering experience of APR Energy, a Jacksonville Florida company specializing in fast-track power supply; the company trades on the London Stock Exchange, and until recently APR regarded Libya as a solid market for expansion.

In June 2013, APR announced it had inked a deal with Libya’s state-run General Electric Company to provide 450MW of power, calling it “the single largest contract ever signed in the fast-track power industry,” and positioning it to be the industry leader, according to the press release. Libya badly needed APR. Countless new businesses, from radio stations to clothing stores, had opened in the capital, putting immense strains on the grid, especially during the blisteringly hot summer months when residents ran their air conditioners day and night; without more electricity the post-Gaddafi boom looked doomed. APR sent quantities of equipment into Libya on shipping containers, setting up mobile power stations in a matter of months, compared to the usual three to five years it takes to construct conventional power facilities.
[fortune-brightcove videoid=4036865625001]

But the company could not have predicted Tripoli’s rapid descent into chaos.

Weeks after APR extended its Libyan contract, last July, the capital fell to rebel forces, and the government fled the city. That left APR unable to secure any guarantees of payment from Libya. Last December 23, APR finally admitted their Libyan operation was over, driving its stock down 23% that day to a record low (the stock has soared since). In a January conference call APR’s CEO Laurence Anderson told analysts that they simply had to cut their losses in Libya, and that it would take “months” for the company to leave the country. Anderson said there was “a vast amount of equipment and components to move,” and that its staff was “tearing down the sites, packing up the equipment.”

In fact, with no functioning national government, there was little legal protection for their investments. “Libyans don’t feel any obligations to pay them, and APR cannot go in and get their equipment, Geoff Porter of Narco told Fortune. He believes APR’s experience is not unique. “It is a fairly common story: Companies contracting with the government, but never sure which part of the government is correct, and they never get paid,” he says.

Despite all that, however, some investors still see Libya as worth the risks, just not right now. That suggests that if the rival governments could end their bitter fighting (U.N.-brokered peace talks are ongoing) and perhaps launch an effective joint assault against ISIS, and impose peace, investors will be tempted again. “We have a lot of interest from a lot of clients,” Ghellal says, adding that violent insecurity is only one problem businesses fact. As APR discovered, “there is a real issue with honoring contracts, with payments, with getting money out of the country,” he says. And then, there are the myriad other, more mundane ways in which Libya’s upheaval hits business operations. “We go days and days with no fuel, no electricity, banks closed, no food in the stores,” he says. “It makes it very difficult to move your projects forward. People are looking for certain point of ‘normality,’ for the situation to change.” With deadly incursions on oil facilities, and uncertainty about who runs the country, it could take a while for a sense of normality to return.