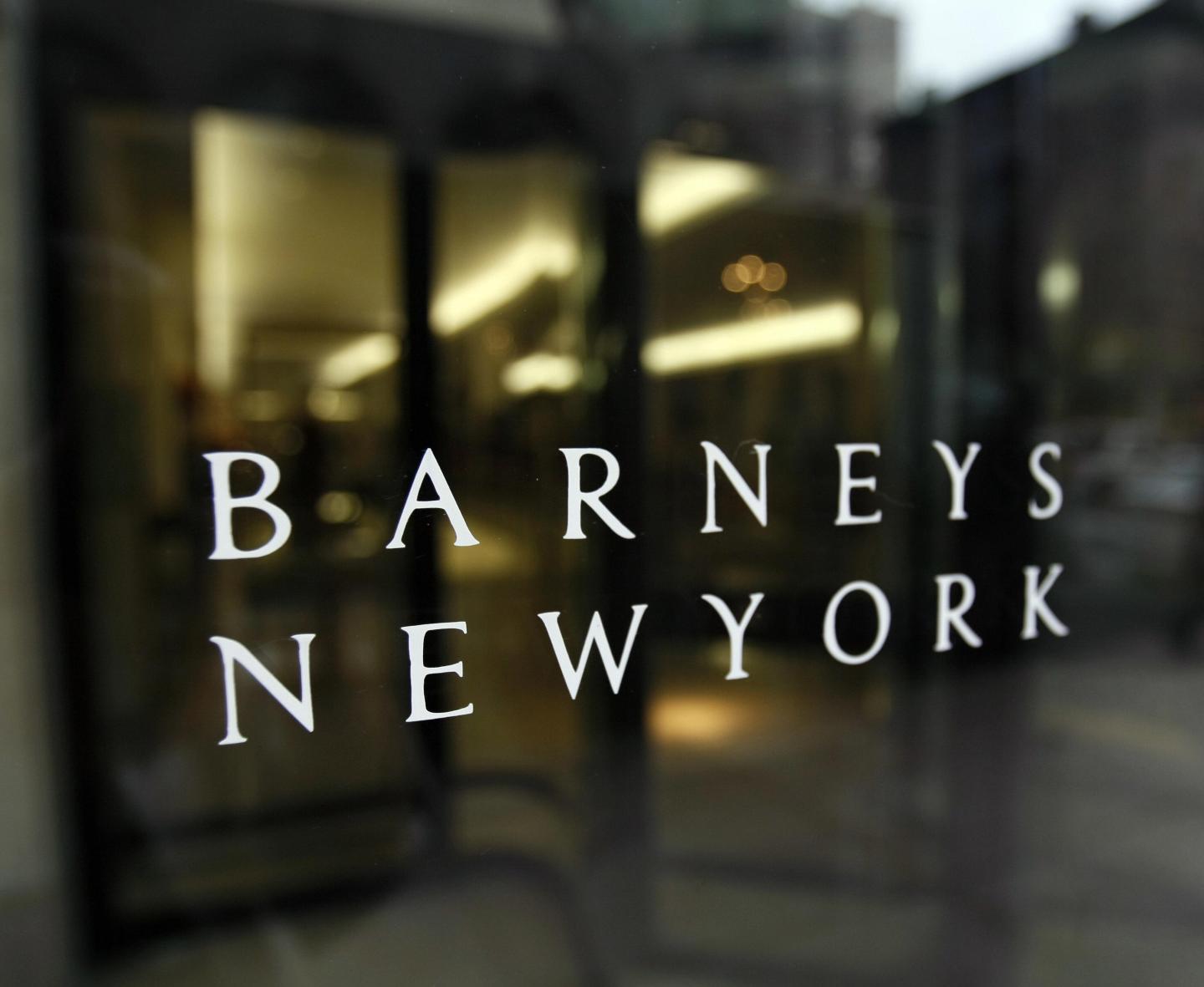 (FILES) The front window of Barneys New York is seen on Madison Avenue in midtown Manhattan 06 August 2007. The Gulf emirate of Dubai is making headlines with a series of high-profile investments abroad in everything from aircraft builders to Las Vegas casinos, but some deals are financially risky and could even spark a protectionist backlash, economists say. Government-controlled or backed firms and investment funds have chased strategic targets such as European aerospace giant EADS, owner of Airbus, in which Dubai International Capital bought a 3.12-percent stake, and brand names like the upscale Barneys New York retail chain, which Istithmar, another investment arm of the emirate, wrested from a rival Japanese bidder. AFP PHOTO/TIMOTHY A. CLARY (Photo credit should read TIMOTHY A. CLARY/AFP/Getty Images)
Photograph by Timothy A. Clary — AFP/Getty Images

Barneys New York is ready to give its big luxury brethren a run for their money in the e-commerce wars.

The department store company knows luxury customers demand beautiful presentation and personalized service, and that that applies online as well as to its stores. With that in mind, Barneys re-launched its e-commerce sites last Friday, proclaiming them to be the first by a luxury retailer to use so-called “responsive design”—a state-of-the-art approach to web design that optimizes e-commerce sites across a panoply of devices—that it says greatly enhances product presentation online and allows better personalization of content to an individual’s tastes.

Barneys New York, which operates nine department stores and 21 other stores, is a relative latecomer to e-commerce among luxury department stores, only getting serious about e-commerce in the last four years. But it now gets somewhere between 15% and 20% of its sales via digital channels, compared to very little back in 2011, putting it roughly on a par with bigger rivals, Nordstrom (JWN) and Neiman Marcus, two e-commerce masters that get 18% and 21% of sales from e-commerce respectively.

Those two retailers, as well as Saks Fifth Avenue and Macy’s Inc’s (M) Bloomingdale’s stores are all engaged in an arms race to keep offering finicky luxury shoppers the next big thing in e-commerce, putting pressure on Barneys, with its more modest resources (annual revenue is estimated to be about $1 billion, versus more than $12 billion at Nordstrom), to keep pushing. Indeed, Nordstrom is set to spend billions in the next five years on e-commerce, while Neiman Marcus is also pushing the boundaries: for instance, in October introduced a Shazam-like visual search-and-purchase mobile app called “Snap. Find. Shop.”

Barneys executives say its new web sites — for its full-price Barneys.com business, its off-price Barneys Warehouse site, and its The Window editorial website featuring magazine-style articles and photo layouts — are game-changers that put Barneys in the lead in some key aspects of e-commerce for upscale chains. One key advantage of “responsive design” is that it reduces the need for re-sizing, and scrolling in search of the best view of a product, key to holding a shopper’s attention and to sending tailored messages to customers.

“We don’t want to waste people’s time. If we show them things (on the sites) they’re absolutely not interested in, they’re not staying and buying,” Daniella Vitale, Barneys Chief Operating Officer, told Fortune in a phone interview from Milan. “We want to make sure our experience is more customized and personal.”

Personalization has become a holy grail of sorts for retailers eager to be heard above the din. But stores know they need to go well beyond Amazon.com’s (AMZN) recommendations, which are largely based on what other people who’ve bought the same thing as you also purchased. Barneys new web sites incorporate what a shopper has bought in store, not just on its sites, since those buying patterns can differ from online behavior. For instance, few people may buy a $50,000 necklace on line, but they will certainly browse for jewelry Barneys web site.

Of course, Barneys will face tough competition on the personalization front: last fall, Neiman introduced the “MyNM” dashboard on its website in October, while Nordstrom bought menswear service Trunk Club in August to hone its personalization skills. Yet, e-commerce experts say personalization has been tough to crack for even the best retailers, which relatively few shoppers logged on at all times.

“It’s like clienteling,” says Sucharita Mulpuru-Kodali, principal analyst at Forrester Research. “If someone is a huge fan of a particular brand, personalization can be useful. But it’s a lot of work for not a lot of return.”

The goal for Barneys is not just to make recommendations based on past purchases, but to look forward and use the info to suggest up-and-coming brands that it thinks might be a good match. In an increasingly crowded luxury space, it is key for Barneys to differentiate itself by being the retailer that puts more of the spotlight on emerging designers.

“It’s why people come to us. It’s core to our brand DNA,” said Matthew Woolsey, the retailer’s executive vice president of digital. Barneys is after all the store where top luxury designer brands Proenza Schouler, Dries van Noten and Armani got their U.S. starts. To that end, Barneys new site has a “my designers” feature that lets users choose their favorite designers, filter any page to get emails that are based on their preferences.

But more important for a luxury retailer, Mulpuru-Kodali says, is the need to make sure the photographs and editorial content are top-notch. Which takes us back to the “responsive design” of the sites, which ultimately is about making sure the websites entice.

The sense of discovery and making customers feel like they’re in the know in fashion is part of why a big component of this digital reboot for Barneys was aimed at taking information from The Window, which is not advertorial content, but about 10 articles a week, and integrating it more with the e-commerce site. That allows people to buy what they’re reading about. But more important, it helps drive traffic to the e-commerce site. The company says that visitors to the The Window site are 15 times more likely to shop at barneys.com than other visitors to the site, and spend 40% more.

“We can’t be all things to all people,” Vitale said. “So we are focused on cultivating our influencers.”