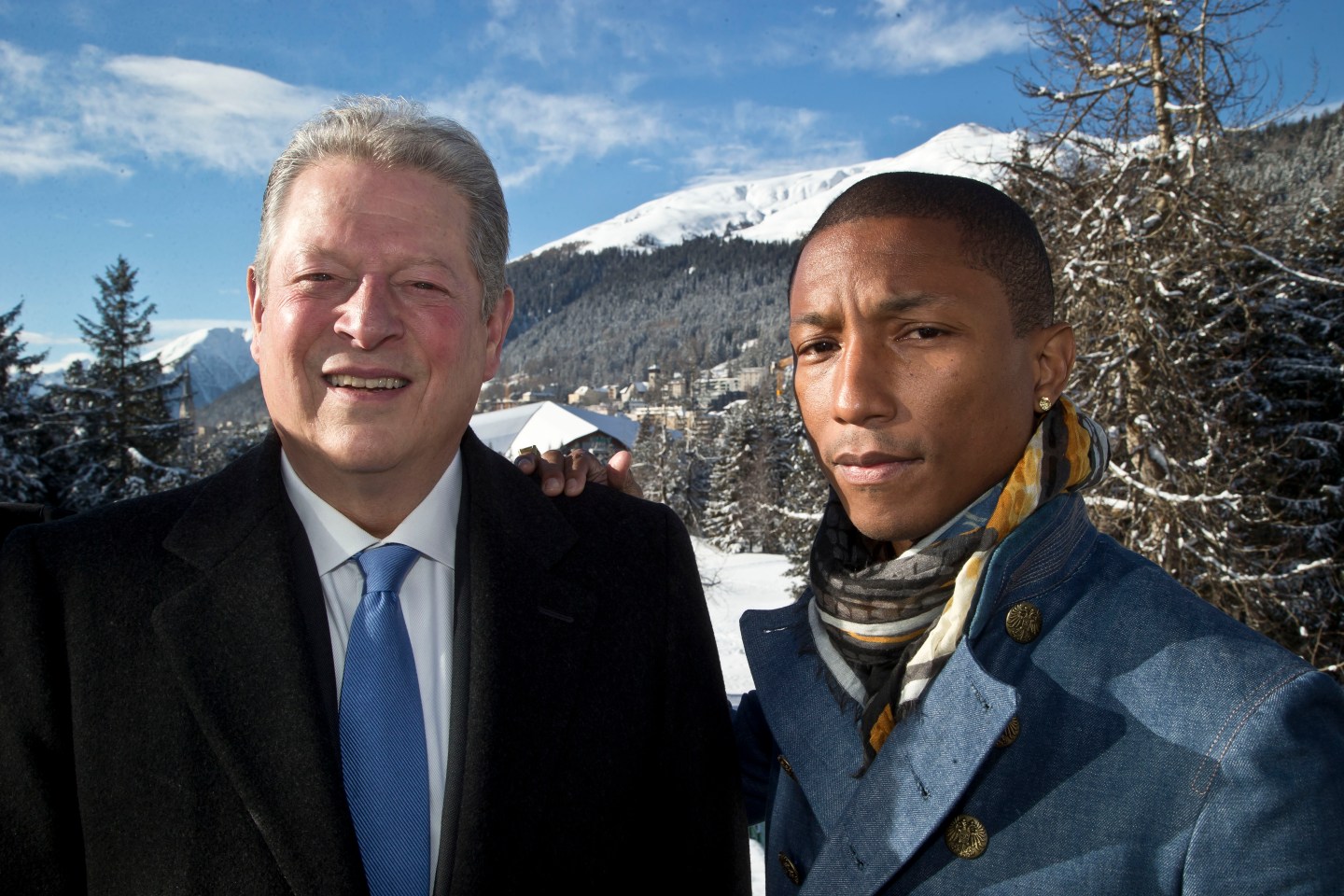 Former US Vice President Al Gore, left, and US singer Pharrell Williams, right, pose at the Congress Center where the World Economic Forum takes place in Davos, Switzerland, Wednesday, Jan. 21, 2015. The world's financial and political elite will head this week to the Swiss Alps for 2015's gathering of the World Economic Forum at the Swiss ski resort of Davos. (AP Photo/Michel Euler)
Photograph by Michel Euler — AP

In their new book, Get Big Things Done: The Power of Connectional Intelligence, co-authors Erica Dhawan and Saj-nicole Joni explain how rapper Pharrell Williams uses his music connections to serve a higher purpose. Below, is an exclusive edited excerpt:

Last month at the World Economic Forum at Davos, rapper Pharrell Williams made a big announcement to prime ministers, billionaires, and CEOs. He announced a concert over seven continents to mobilize support for a UN climate pact in Paris at the end of the year with his collaborator, Al Gore. Tackling climate change is not what we might expect from a rapper and hip hop producer, but that’s what makes Pharrell so unique.

Pharrell Williams was never your typical rapper. He grew up in Virginia Beach; his Mom was a teacher, his Dad was a handyman. In school, he wasn’t the cool guy. He met his producing partner, Chad Hugo, during seventh grade band camp. Chad played the tenor saxophone and Pharrell played keyboards and drums. The two band-nerd friends formed a group called the Neptunes, which they imagined as a modern day incarnation of old-school Motown guy groups like Smokey Robinson and the Miracles, or The Temptations. From the beginning, Pharrell’s high-pitched falsetto was one of his most distinctive musical traits. By the time he and Chad graduated high school, the Neptunes were signed with top producer Ted Riley.

It seemed Pharrell had that rare gift for creating music—tracks, hooks and lyrics—that was always one step ahead of the curve.

Then, in 2006, he released his first solo single, “In My Mind,” and the album tanked. For Pharrell, the failure of the first album on which he’d fully fronted his own work was devastating. It took him a long time to see the reason behind it: he wasn’t being true to himself. He remembers that he was trying to “be like my peers—the Jays and the Puffs of the world, who make great music. But their purposes and their intentions are just completely different than what I have discovered in myself.”

He took a step back and asked himself how could his music serve a higher purpose, “because I felt like I had amassed this big body of work, most—not all—but most of which was just about self-aggrandizement, and I wasn’t proud of it. So I couldn’t be proud of the money that I had; I couldn’t be proud of all the stuff that I had. I was thankful, but what did it mean? What did I do?”

What he did was harken back to who he was as a kid in Virginia Beach, when he played in the marching band after school and spent hours on the weekends at the local skate park. He realized he’d never felt fully at home in the world of hardcore hip-hop, he was tired of trying to mimic the titans of that world—Jay Z and P. Diddy. He took his wealth, time and his energy and created i am OTHER, an organization dedicated to reaching young people who feel different and helping them use their unique talents to launch creative ventures. As Pharrell states in the organization’s mission statement, “We are proud to be different and believe that individuality is the new wealth. This shared philosophy flows through each pillar within our organization: music, film, television, apparel, tech and multimedia.”

There’s a friendship behind Pharrell’s public success that harkens back to many connectionally intelligent friendships and partnerships throughout history. For example, Albert Einstein referred to his closest friend, Michele Besso, as “the best sounding board in Europe.”

It was through their daily walks, discussing a shared love of the violin and scientific exchange, that Einstein was able to create his theory of relativity. As Einstein recalled at a lecture in Kyoto in 1922: That was a very beautiful day when I visited [Besso] and began to talk with him as follows: “I have recently had a question which was difficult for me to understand. So I came here today to bring with me a battle on the question.” After a lot of discussions with him, I could suddenly comprehend the matter. The next day I visited him again and said without greeting “Thank you. I’ve completely solved the problem.”

In his book Powers of Two, Joshua Shenk explores the lives and accomplishments of scores of creative duos. Shenk shows that the romantic myth of the lone genius fails because it obscures the social, connected qualities of innovation. Shenk goes on to claim that the pair is a “primary creative unit,” because it can be seen in case after case as a fundamental, fractal, and recurring shape in the patterns of innovation.

We agree: the creative pair is a natural and powerful expression of connectional intelligence that is often central to getting big things done. When Pharrell decided to reboot not only his career, but his entire approach to the music industry, and to focus on service and giving a

voice to kids who were like himself, he turned to his close friend Mimi Valdes, the former editor-in-chief of Vibe and Latina magazines. Pharrell, who had long leaned on Valdes’ advice, asked her to join i am OTHER as creative director, not only to be his sounding board but also to bring to his many ventures her own mix of innovation and fierce integrity. “I was unsure at first,” she admitted. “I had never done this before. But I had to check myself—I have done this before. I know how to create content, and this is just a different form of content. Also, I know more than anybody how to help Pharrell execute his vision.”

At i am OTHER, Pharrell funded and mentored kids who wanted to break into all of the fields to which he had access: fashion and entertainment, but also tech and manufacturing. He drew on the talent and creativity of the young people who had grown up on his music to start Bionic Yarn and other initiatives. Bionic Yarn, which creates textiles from recycled plastic bottles, has been tremendously successful, linking partnerships with companies like Kiehls, Cole Haan, and the Gap.

He also created the Collaborative Fund, a venture capitalist fund that he described as “an investment fund focused on supporting and investing in the shared future. The fund centers around two macro themes, which we believe to be at the core of business innovation in the coming years: the growth of the creative class and the collaborative economy.”

Inspired by his success, Pharrell did more—he co-founded a manufacturing company, Brooklyn Machine Works that crafts handmade bikes. And he founded From One Hand to AnOther, which has brought STEM (Science, Technology, Engineering and Mathematics) curriculum to underserved kids in communities across the country. He was so busy and so satisfied and felt so fully himself that what he really needed to do, what he wanted to do, he said, was get back into the studio and make music again. The result was “Happy,” an unabashedly joyful song that went on to become the greatest hit of Pharrell’s career, selling millions of copies. Its 24-hour video, 24hoursofhappiness.com, reinvented and reinvigorated the music video format. And then the United Nations called. They wanted to partner with Pharrell to promote the International Day of Happiness on March 20, 2014. All around the world, people submitted videos of themselves—singing and dancing, serenading their loved ones, dancing with children, family, pets and friends.

For Pharrell, who discovered, literally, a world of connection through embracing his otherness, this has been more than the biggest spike of his career. As he put it, it’s the discovery of his life’s work. “I didn’t know what my path was. I knew that I was meant to do something different. I knew that I needed to inject purpose in my music.” He called everything that led to his greatest failure, “just training.” Now when he considers any decision, creative or otherwise, he tells himself, “keep putting purpose in everything you do. Don’t worry about it; just put purpose in there.”