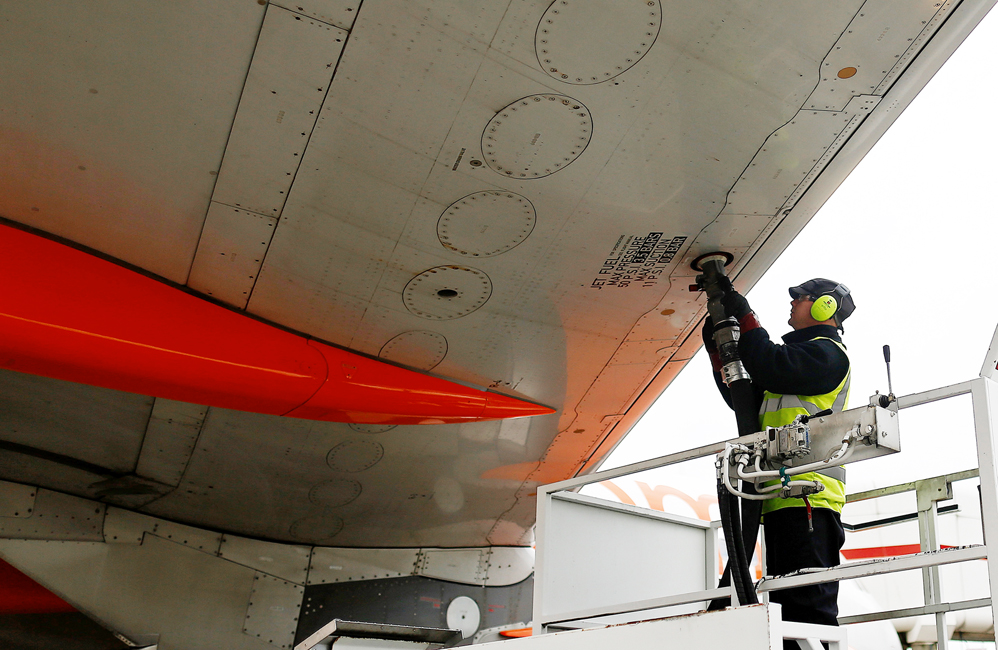 If you want to know who’s benefiting from the drop in oil prices, you don’t have to look far. “This was the best year in the long, proud history of American Airlines,” Doug Parker, the megacarrier’s CEO, said a few weeks back as he announced that American (AAL) made a profit of $4.2 billion in 2014. Delta (DA) made even more money last year than American did: $4.5 billion. United netted $1.97 billion, up 89% over 2013. The airlines’ profitability is good news for their shareholders—and for their employees, some of whom have been getting long-delayed raises. But what about passengers? Does the big fall in the cost of jet fuel mean we are getting a break on fares? Heck, no.

Recently I tried to book a family trip to London for April. The cheapest nonstop flights I could find from the New York area were about $1,250 each, or roughly $5,000 for the four of us. Suffering from sticker shock, I considered switching to southern Florida or New Orleans instead. Flights to Miami started at just under $600, hardly a bargain. The cheapest flights to New Orleans were about $500. JetBlue (JBLU), the “discount airline,” wanted almost $600. Ouch!

I wasn’t alone in feeling miffed. A few years ago, when the cost of jet fuel rose above $3 a gallon, the airlines quickly tacked on hefty fuel surcharges. Now jet fuel costs less than $1.70 a gallon, and the surcharges are still in place. Figures from the Department of Transportation confirm that airfares are as high as they’ve ever been. “We have seen six months of steadily dropping gas costs,” says Paul Hudson, president of FlyersRights.com, a lobbying group for airline passengers. “By any measure, the money saved by the airlines should be reflected in lower airfares.”

Why isn’t that happening? Initially some people defended the airlines, saying their hedging strategies had locked them into buying jet fuel at high prices. That wasn’t accurate. Some airlines, such as Delta and United, do hedge part of their fuel needs, using puts and calls. That gives them the right, not the obligation, to make purchases at prespecified prices. Unwinding the hedges can be costly, but it doesn’t prevent airlines from taking advantage of lower fuel prices. Delta reckons it could save up to $2 billion this year: There’s no indication it intends to cut fares. And some airlines, notably American, didn’t do any hedging to begin with, so the slump in fuel prices went straight to their bottom lines. Small wonder American’s CEO told analysts, “We believe 2015 will be yet another record year.”

Arguably, the main reason that fares haven’t fallen is that on many routes the big airlines now lack meaningful competition. During the past decade or so, they have slashed capacity, merged with competitors, and entered code-sharing agreements—all steps that help them maintain high prices. Take the New York–London route. Not so long ago there were more than a half-dozen airlines competing for passengers, and price wars were common. Today three big combines have largely carved up the routes among them: British Airways, American, Delta, Virgin, and United Continental. If you go to a travel site, you will find that fares are virtually identical on all those airlines. And as every frequent flier knows, they are consistently higher than they used to be.

That’s partly because of all the surcharges. Sen. Charles Schumer (D-N.Y.), who is a member of the Senate Judiciary Committee, has called for a federal investigation into why the airlines haven’t rolled them back. If you buy tickets directly from the airlines or on sites such as Expedia and Orbitz, the cost is seldom broken down. But Google’s (GOOG) ITA software, which anybody can use, shows that on flights between J.F.K. and London’s Heathrow, for example, American still levies a “carrier-imposed surcharge” of $458 per passenger. British Airways imposes exactly the same fee. So does Delta. So does United. Virgin charges $450. With jet fuel cheaper than it’s been in years, what is the basis of those levies?

At the very least it would be good to see Parker and his fellow airline CEOs hauled up to Capitol Hill and asked to provide some answers. The same goes for the bright sparks at the Justice Department, who nodded through all those mergers and codesharing agreements. “Because of the big airline mergers, competition has been squeezed out of the system,” notes Charlie Leocha, the chairman of Travelers United, another consumer group. “With only three network carriers, airlines now have the luxury of ignoring the market and maintaining high prices and low capacity.”

This isn’t exactly unfamiliar territory. Until the latter part of the 1970s, when the late Alfred E. Kahn led the fight for deregulation and competition, high prices and restricted choices were the norm in the airline industry. Things aren’t quite that bad today, and airlines are entitled to make a reasonable profit. But when competition fails, it’s up to the authorities to find out what’s wrong and propose a remedy. If we don’t see cheaper airfares now, will we ever see them?

This article is from the May 1, 2015 issue of Fortune magazine.