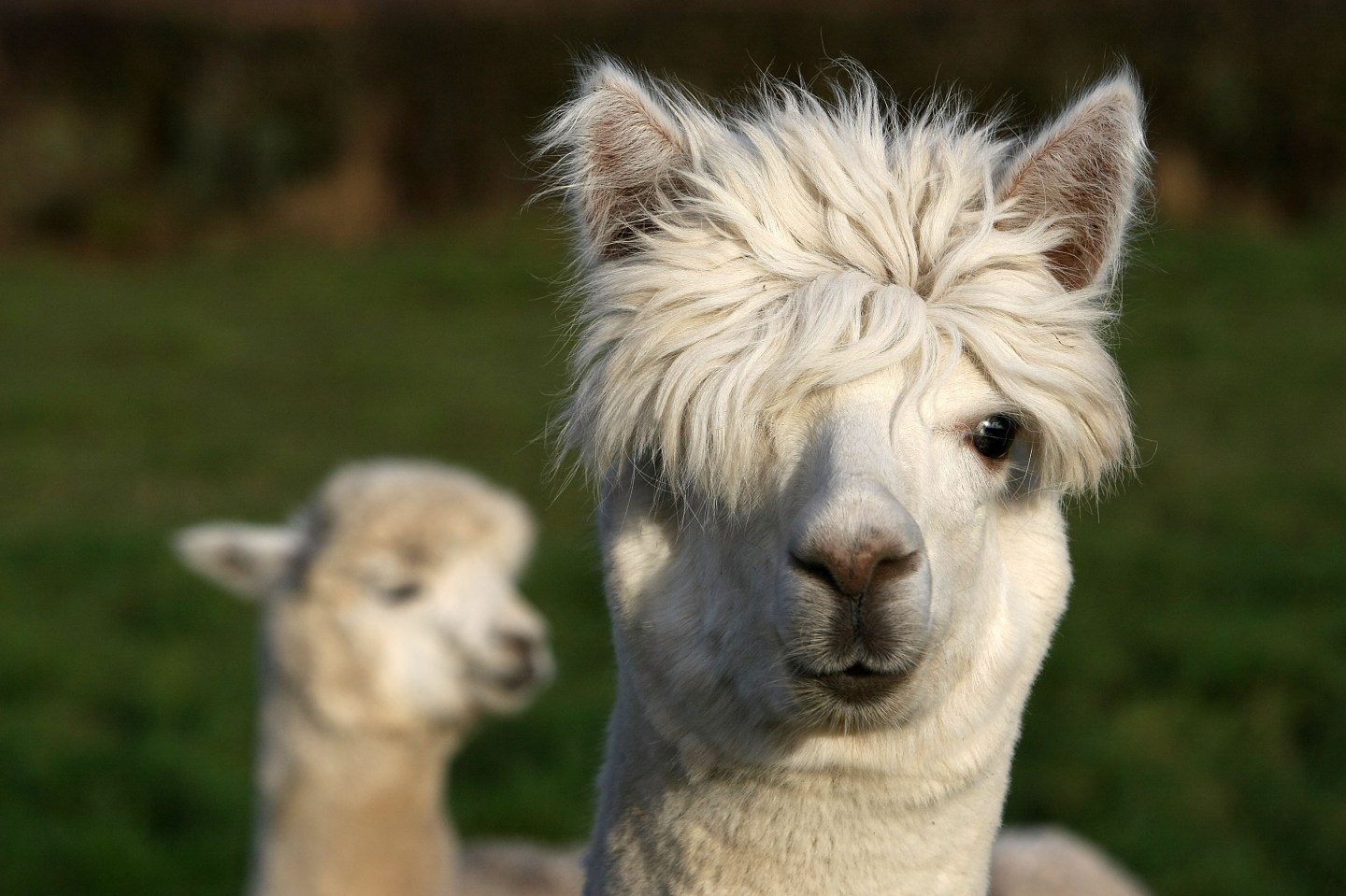 KNUTSFORD, UNITED KINGDOM - DECEMBER 13: Alpacas graze on a field owned by farmer Khanikhah Guy at her country small holding on December 12, 2007, near the village of Pickmere, Knutsford, England. Alpacas are part of the camelids family and originate from the Andes. They are much sought after for their wool and coats which make high quality clothes and garments. Khanikhah's products and animals have become popular with the affluent and celebrity set of Cheshire with Alpacas becoming the latest new designer pet and costing up to GBP 5000. Socks made from the wool are her top selling Christmas present from her Artemis Alpacas Farm Shop. Shearing of the animals wool is done annually by a skilled shearer who flies to the UK from New Zealand. None of her animals are slaughtered for their fleeces and are only used after a natural death. (Photo by Christopher Furlong/Getty Images)
Photograph by Christopher Furlong — Getty Images

Shearing alpaca in Peru is full of ceremony and ritual. The animal, which resembles the love child of a small camel and sheep, is prized for its exotic wool yet isn’t as docile as sheep when it comes to getting a haircut. High-end designers are flocking to alpaca for its valuable fiber as many of them feel the yarn produced is more luxurious than cashmere and mohair.

The sudden interest in alpaca doesn’t surprise Michelle Peglau, owner and designer of Hortensia Handmade. In fact, she wonders what took so long. The Peruvian native currently based in New York City works with more than a dozen women artisans from her home country to meet the growing demand of Peruvian alpaca wool accessories for high-end boutiques around the country.

Peglau’s decision to focus on accessories puts her in good company. Scarves, wraps and other cold weather outwear accessories are helping create double digit growth in the women’s apparel retail sales category. According to the NPD Group, sales reached $7.1 billion in 2013 (a 7% increase in one year at the end of March 2014) in women’s apparel, in large part to double digit growth in smaller categories such as accessories.

Peglau attributes interest of Peruvian alpaca, once called the poor man’s cashmere, on several factors including designers seeking more exotic and rare yarns to create their pieces and how hard it is to get the wool from alpacas.

“Cashmere is very mass-produced and high-end designers are looking for a substitute,” says Peglau. Originally, many designers would blend alpaca wool with more familiar yarns like merino wool. Now, they are using 100% pure alpaca wool like her company does to produce its scarves, beanie hats and ponchos.

“You’re seeing it on the runway,” she adds. “It’s more like an answer as people are realizing it’s a good yarn. It has the same benefits of cashmere, but it’s more rare. Alpaca wool lasts a long time.”

Peru is the biggest producer of alpaca wool, but the cousin to the camel doesn’t make it easy for the shearing to occur. Before the shearing begins, the community prepares an ancient ceremony, led by an elder, as a way to give thanks to the animals for giving them their wool after the community cared for them throughout the year.

The animals are not harmed during the shearing process, and Peglau explains to her customers the details if they ask – and she’s happy many of them have begun asking those questions over the past few years.

She recalls a time when she would do trunk shows and she’d try to tell people about the process and the artisans and they would listen politely. “But now,” she says, “people really listen. They want to know. I’ve seen a change [in the last few years].”

Still, though, the design needs to be beautiful and the product well-made to attract a customer’s attention first.

Once someone is attracted to the piece and touches the soft alpaca wool, then the fact that the products are sustainably-made, handmade and not mass-produced come into play.

Growing interest in fair trade, a movement that ensures a fair wage and safe working conditions to artisans in developing countries, also has helped the alpaca wool industry.

Micky Magnolo, owner of The Green Merchant in Evergreen, Colo., used to carry fair trade alpaca wool sweaters in the $300 range and the woman who bought them didn’t flinch at the price since they knew it was an opportunity to buy something special, she says.

“Certainly one of my goals [as a fair trade store] is for my customers to know the story,” Magnolo says. “That it was someone’s hands who made the piece. [That it’s] a traditional craft made from a sustainable source. You can feel the love that went into it, the hope and opportunity it brings. Further, the quality is evident. These are pieces to be enjoyed for years to come.”

Peglau may focus on the designs but she admits that working with talented knitters who understand technique and a willingness to constantly improve finishes is what makes it easier to produce high-quality pieces like their popular chain scarf.

Her version of the chain scarf couldn’t have been done by anyone with just a knitting background, for example, and she explains how they were able to achieve the high design and contemporary look using their knitting techniques.

“We were looking for something really stunning,” she begins. “I had seen the chain scarf but the knit wasn’t as tight. Not as strong as a look as [our design]. Those were very crafty. We work very hard to work on our styles but our knitting technique is very strong. We don’t compromise on that. That’s why it’s so stunning. When people grab it, it’s heavy. It’s an intricate technique of crochet that we [use]. It’s thick and the stitch is very close together which is why it comes out so nicely. It’s a look.”

That “look,” as Peglau calls it, and the ability to create those contemporary, high-end designs using a lesser-known and available fiber are among the reasons Peruvian alpaca wool has gained a prominent space in luxury fashion circles. It’s also something new for trend-setters to wrap their head around.