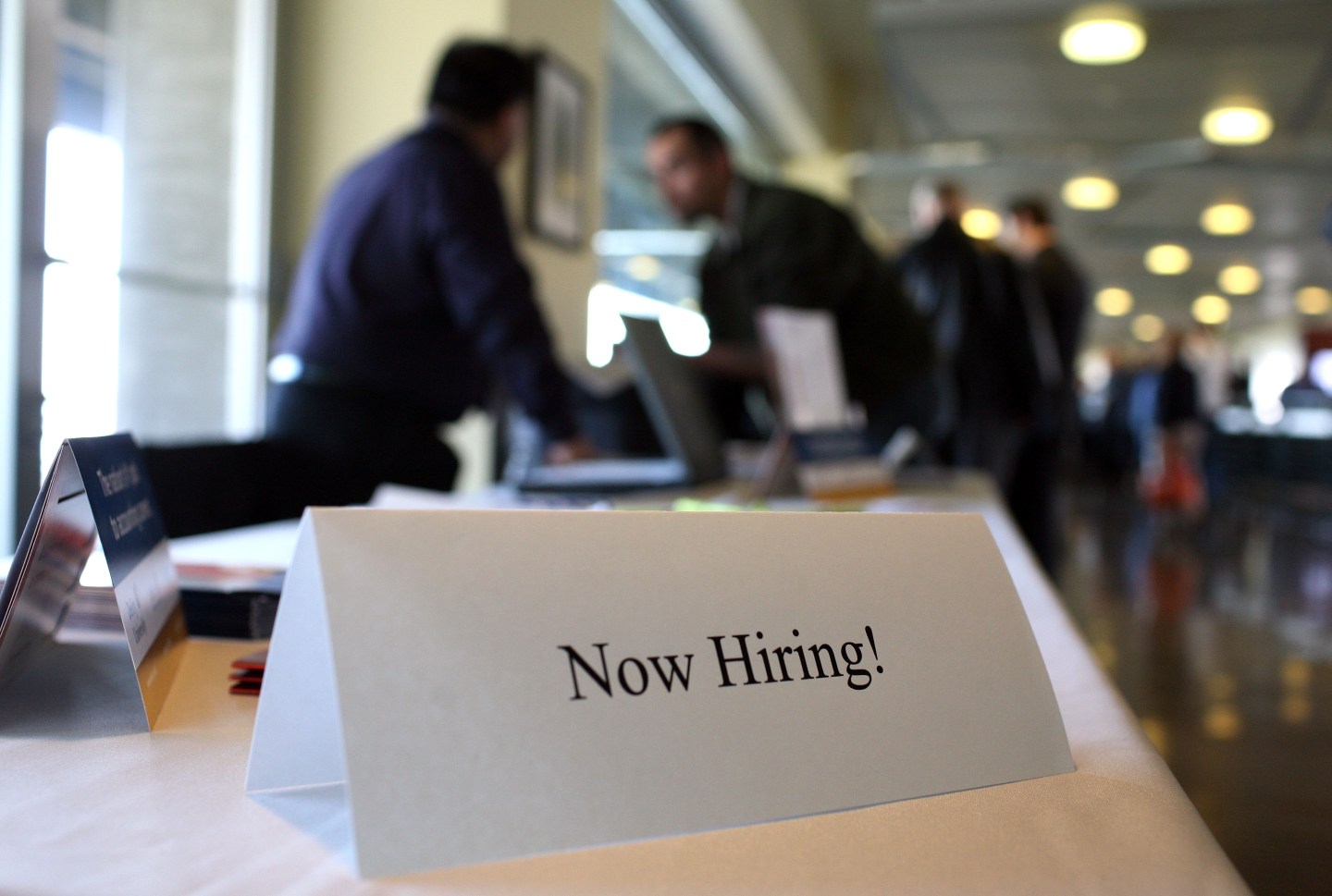 SAN FRANCISCO - MARCH 19: A "now hiring" sign is posted on a table during the Recruit Military Career Fair March 19, 2009 at AT&T Park in San Francisco, California. Hundreds of military veterans attended the career fair that was open only to veterans. (Photo by Justin Sullivan/Getty Images)
Photograph by Justin Sullivan — Getty Images

Shares of social media company Twitter (TWTR) are up sharply after the company issued a generally upbeat earnings report after Thursday’s close. Another tech name, the action video camera maker GoPro (GPRO), is seeing its shares sink after issuing a profit warning Thursday.

After the earnings call, GoPro’s CEO spoke to Fortune’s Tom Huddleston, Jr., about his media ambitions, a potential Apple (AAPL) rivalry, and drones.

It’s time for a musty old 80s relic to call time. The troubled electronics retailer RadioShack — which is actually nearly 100 years old — has finally filed for bankruptcy, and will be selling many of its stores to General Wireless, which will in turn set up “stores within stores” for cellular provider Sprint, reports Fortune’s Phil Wahba. So go buy some batteries, and pour some out for RadioShack.

The latest jobs report, released Friday morning, shows U.S. employers picked up the pace of hiring last month, with a rebound in wages, supporting views that the labor market and the broader economy are moving closer to full health more than five years after the recession. U.S. employers added 257,000 jobs in January, while the nation’s unemployment rate ticked up to 5.7%.

It was a good day for Twitter yesterday. The social networking site reported a 97% jump in revenue, and shares shot up on the news, despite the fact that the company is still not profitable, according to Fortune’s Erin Griffith. Twitter has 288 million active monthly users, a 20% increase over last year. The upbeat reaction on Wall Street will temporarily take the heat off embattled Chief Executive Dick Costolo, analysts said.
[fortune-brightcove videoid=4034485556001]

Following the recent election of left-wing party Syriza, Greece has been all international economists have been able to talk about lately, and on a trip to Germany yesterday, Finance Minister Yanis Varoufakis gave them something to talk about, as he and his German counterpart squabbled over how to solve Europe’s debt crisis. Expect more political theatre in the days and months ahead as Varoufakis seeks to drum up support for Greece’s plan to renegotiate its massive international bailout.

On Wednesday night Anthem, the second-largest health insurer in the United States, announced that it had succumbed to a massive cyber attack. It may be the largest hack to hit the health care industry to date. Now Anthem is reportedly facing the first of many potential consumer lawsuits, Bloomberg reports. The hack could have exposed social security numbers and other personal information of up to 80 million users. And it gets juicier: Bloomberg is also reporting that some people close to the situation believe it is the work of Chinese state-sponsored hackers.