Slow progress at America’s biggest (and most dysfunctional) port 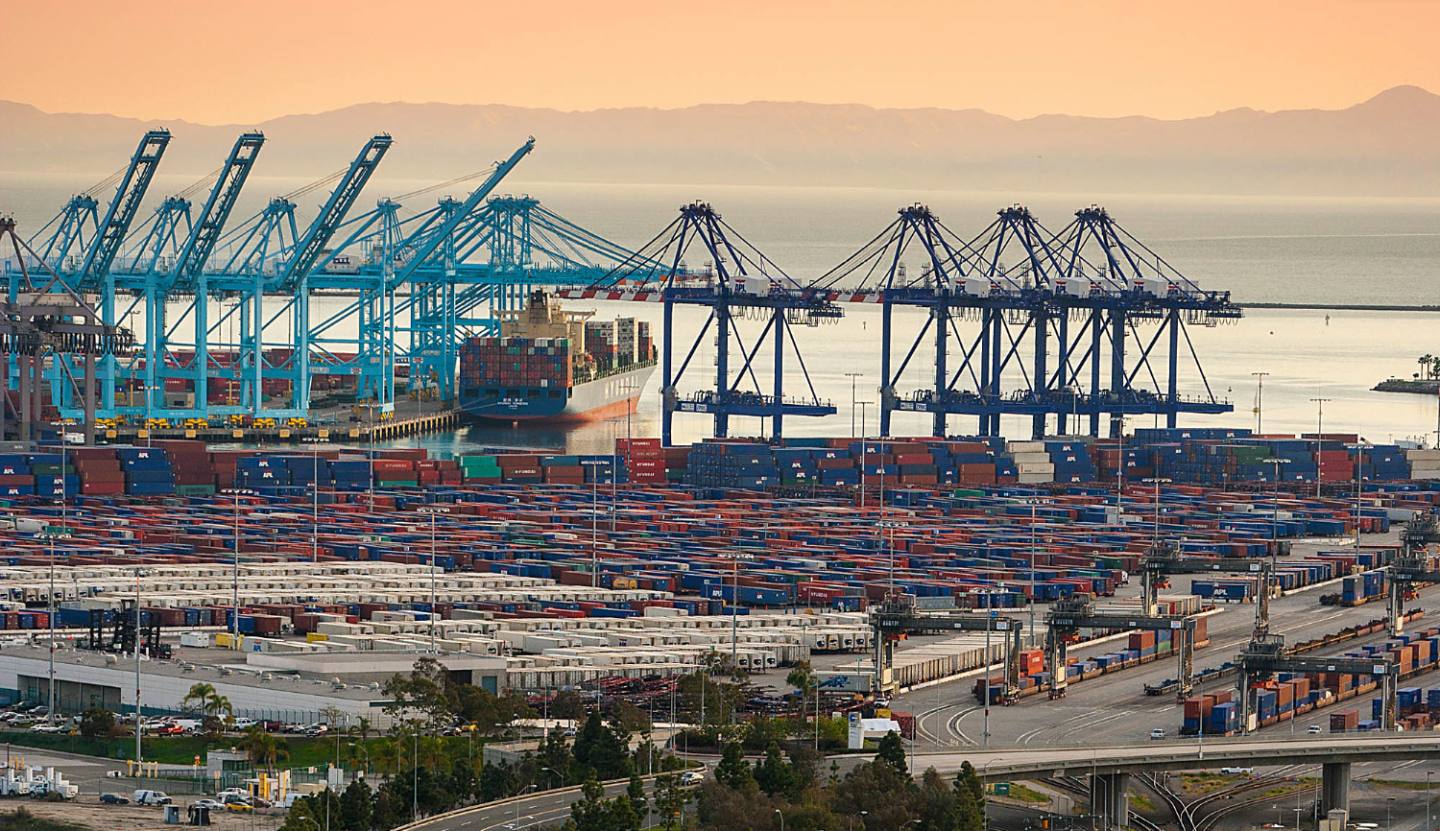 The Port of Los Angeles in Feb. 2013.
Photograph by Tim Rue — Bloomberg/Getty Images

The adjacent ports of Los Angeles and Long Beach in California are the beating heart of United States international trade. They handle two-thirds of all ocean cargo volume on the West Coast, and more than one-third of all volume in the U.S. Their steel ventricles sprawl over more than 11 square miles of land—one-third the size of Manhattan. Tugboats weighing tons look like bathtub toys next to container ships the size of city blocks. Squadrons of semi trucks and mile-long trains disappear into the horizon, pumping goods from across Asia eastward to American manufacturers, businesses, and consumers.

Since last summer, though, changes in shipping technology and practices at L.A.-Long Beach have slowed the flow of trade through the port. Starting in October 2014, a labor slowdown by longshoremen worsened problems and spread them to other ports along the West Coast. Cargo unloading times have more than doubled to the slowest rate in a decade. Twenty-five-ton containers are now stacked five deep, frustrated truckers spend hours waiting for their loads, and full ships wait at anchor for an open terminal.

Those workarounds kept store shelves stocked for the 2014 winter holidays, but the costs of compensating for port congestion have been substantial. Ocean carriers have begun to levy congestion surcharges against cargo owners, despite some initial hesitation. And while the Targets (TGT) and Wal-Marts (WMT) of the world were able to adjust their surface shipping plans, many small and mid-size retailers were forced to rely on air cargo to get Christmas shipments on time. Gold says that additional costs of air cargo for individual retailers have run into the millions of dollars.

The single biggest factor in the costly chaos at L.A.-Long Beach is amazingly mundane: a change in the handling of the long, wheeled chassis that allow semi trucks to pull shipping containers from the ports to their destinations inland.

For many years, these chassis were owned by the same ocean cargo companies that own container ships. But many shipping lines, in part to heal balance sheets wounded by the global recession, have recently spun off or sold their chassis to equipment leasing companies including Flexi-Van, TRAC, and Direct ChassisLink (a former Maersk subsidiary). The transition has been extremely rocky.

“The chassis availability is scrambled, because there are all these companies that were supposed to have taken over, but didn’t have things entirely together,” says Val Naronha, president of the port research firm Digital Geographic. “If I [as a trucker entering a terminal] haven’t made my own arrangements for a chassis, I turn around. I’ve achieved nothing at the terminal having waited all that time.”

The chassis logjam may begin to clear up this month as an agreement among chassis providers establishes a common pool of chassis, making them easier to manage. But other factors contributing to congestion have no clear resolution timeline. Poor pay and conditions for truckers have caused driver shortages and discontent, while overall U.S. rail shipping capacity is under pressure from rising oil and gas loads from Midwest fracking operations. It’s simply getting harder to get loads out of port, even as overall volume increases.

The ongoing automation of L.A.-Long Beach has also, ironically, added to congestion, as longshoremen have demanded work-stopping safety reviews at the automated terminal run by TraPac. Other problems include bottlenecks caused by ever-larger ships and extra congestion caused by the timing of port workers’ lunch breaks.

For ports and labor unions, who are now in the ninth month of negotiations to renew a contract that expired in July, the sclerosis at L.A.-Long Beach has become ammunition in a war of position: the ports argue that longshoremen are engaged in an illegal slowdown, but workers blame the ports and carriers.

But there has been rising congestion even at West Coast ports with fewer operational issues than L.A.-Long Beach, which some say proves that a labor slowdown is a major factor. “The ports at Seattle and Tacoma had been running at about 25 to 35 [container] moves per hour,” says Wade Gates, a representative of the Pacific Maritime Association, which negotiates with the longshoremen on behalf of port operators. “And at one point in time [in late 2014] that actually moved to as low as 10 to 14.”

One of the situation’s few bright spots is that a complete labor stoppage is unlikely. “They will not shut down the ports,” says Bill Mongelluzzo of the shipping trade publication The Journal of Commerce. “The ILWU doesn’t want to attract federal mediation.”

Even once the chassis gridlock clears and the labor slowdown ends, though, the multiple chronic issues facing West Coast ports have observers wondering whether the future will be much smoother.

“We know trade is going to continue to grow,” says the NRF’s Gold. “Looking at how our ports work today, we’re not ready.”