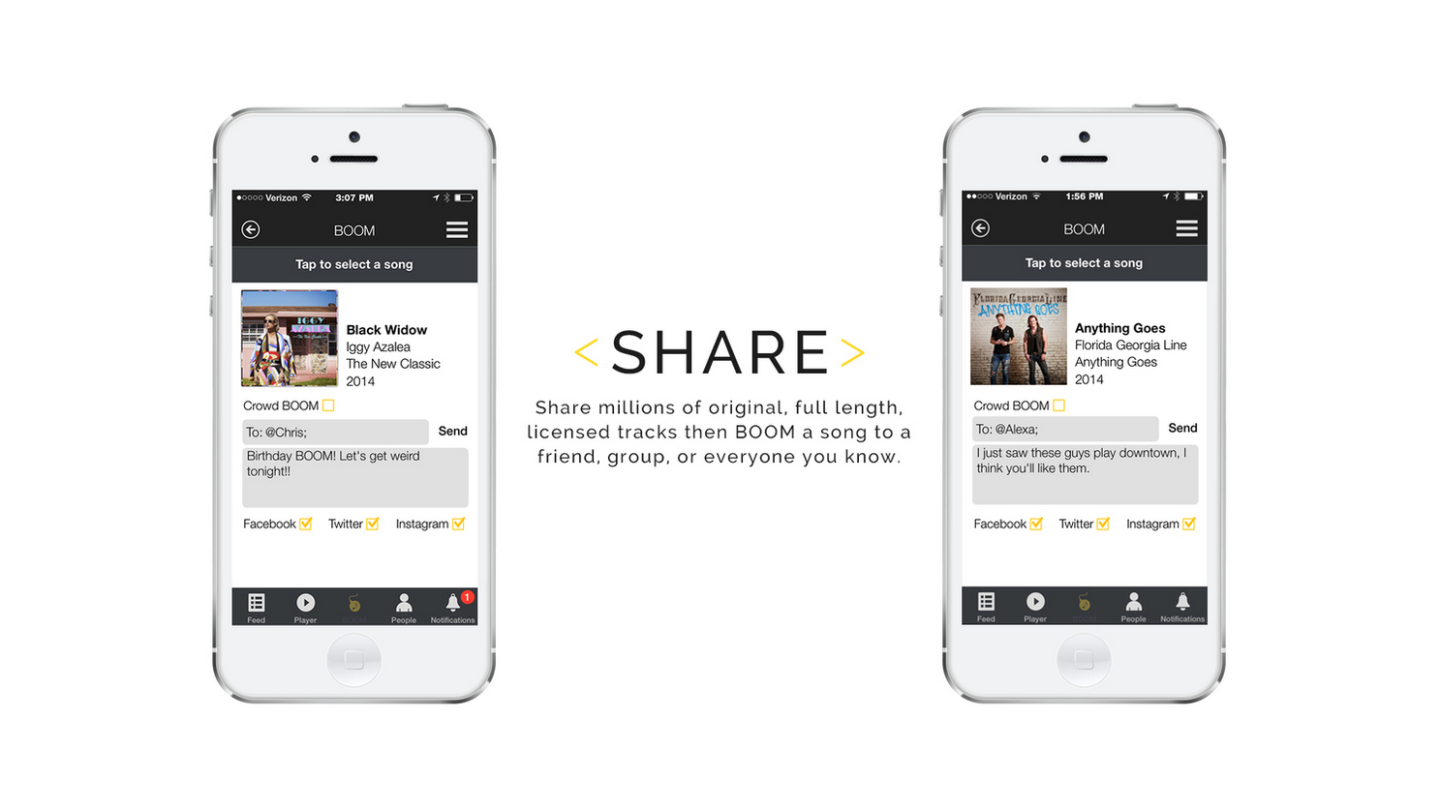 If you’ve ever used an on-demand streaming music service—Spotify, Rdio, Last.fm, you name it—you’re presented with no shortage of options to share a song you really like. With a click or two, you can promote the song on a number of social networks, often with a message of your own creation, to all of your friends.

The problem? Music is pretty personal. If you want to share a Missy Elliott track to your Timbaland-loving friend without also sharing it with your uncle, cousin, and daughter, the seamless sharing process suddenly becomes clunky: copy a URL, paste it into a text message or e-mail, click send. It doesn’t sound like much, but on a phone it can be cumbersome.

A new music service called Boomio tailors itself to this use case. Download the Boomio app, create an account, pick your favorite jam. When you want to share it, select the song, write a message of your choice, and—crucially—”boom” it to any individual user or group of users. The recipients receive a push notification with an opportunity to listen to the song once for free. When they play the track, a digital fuse appears on their screen and burns down until reaching a “bomb,” at which point the song explodes and dissipates into the ether.

That’s the Snapchat part of the equation.

Once the song has self-destructed Mission: Impossible style, the recipient can choose to purchase the track, “boom” it to others, or more conventionally share it with friends on Facebook, Twitter, or Instagram. The recipient can also, in a quid pro quo, reply to the sender with a different tune. (“Yeah that’s great, but check out the production on Brandy’s ‘I Tried.'”) And, of course, there’s a Twitter- or Facebook-style feed where you can see everything your friends are sharing publicly.

“The analogy we like to use is that there’s a lot of ways to share photos but it didn’t become such a spontaneous part of our behavior until Instagram made it super simple,” says Bob Case, executive vice president of content for Boomio. “We like to think we’ve done the same thing here, making sharing a song very spontaneous.”

The idea for Boomio came from PJ Pedroni, a Seattle-based businessman who previously worked at Clear Channel (now iHeartMedia) and now leads Boomio’s sales team. He saw his friends in the rock band Alien Ant Farm—you might remember their 2001 cover of Michael Jackson’s “Smooth Criminal”—using Twitter, Facebook, and e-mail blasts to prompt fans to listen to a new song of theirs streaming on a radio station’s website. “That’s where this came from,” he says. “What if you could just send someone a song? Literally push it to their device along with the reason for sending it?”

The app seems geared toward music nerds, but Pedroni and company actually built it with musicians in mind. Artists can share a new song on every social network and push it to any fans that follow them on Boomio. They can also monitor performance metrics through an artists-only dashboard.

The young company has convinced two of the three major record labels—Universal Music Group and Sony Music Entertainment—that its network is a new way to promote their music. And monetize, of course: artists are paid using a royalty structure similar to Spotify and Pandora. Boomio is currently working on deals with smaller labels and importing thousands of new songs into its database every day. Its current catalog has more than 1.3 million songs. “It’s putting promotion right back into their hands,” Pedroni says. “They used to have to work to get the radio stations to play their song, but here they can send it directly to that fan base in a place that’s monetized and protected.”

The Boomio crew also sees revenue potential in brand partnerships—think an album of the week, Starbucks-style—and advertisements that diverge from Spotify’s four-songs-and-an-ad model used for non-paying customers. “We can curate playlists like ‘On Tour by LiveNation’ or whomever, and you’re served who’s on tour based on your behavior, what you’re sharing, where you live,” Pedroni says. “We’ll also have video ads in the app. If you and I go back and forth and create a 15-song playlist, once you listen to it in its entirety, you’re served an ad at the bottom that says, ‘Do you want to watch this 15-second ad and get another play out of the songs?'” And, possibly, a partnership with Spotify itself to share playlists.

Boomio says it doesn’t want to compete with existing streaming services and instead bring music into the social world. It’s not quite that simple, of course. At their core, Facebook and other social networks are advertising companies vying for a slice of the same pie; Boomio would be one more contender. And profits have been elusive for the services that currently dominate the streaming market: Nine-year-old Spotify has yet to turn a profit, Pandora (P) only turned profitable last year, Apple’s iTunes Radio and Beats Music services are supported by its signature devices, and iHeartRadio is owned by Pedroni’s well-resourced former employer.

Case isn’t worried. “There a lots of digital ways to make connections today,” he says. “We have our relationships through Facebook. We don’t necessarily call, we text. We build our business network through LinkedIn, share our photos with Instagram. Music hasn’t really had that digital renaissance. We really built Boomio on a very simple concept—sharing music with friends, the opportunity to chat about it, the opportunity to build communal playlists. There’s just no greater effect that it has on you than when a friend recommends a song.”