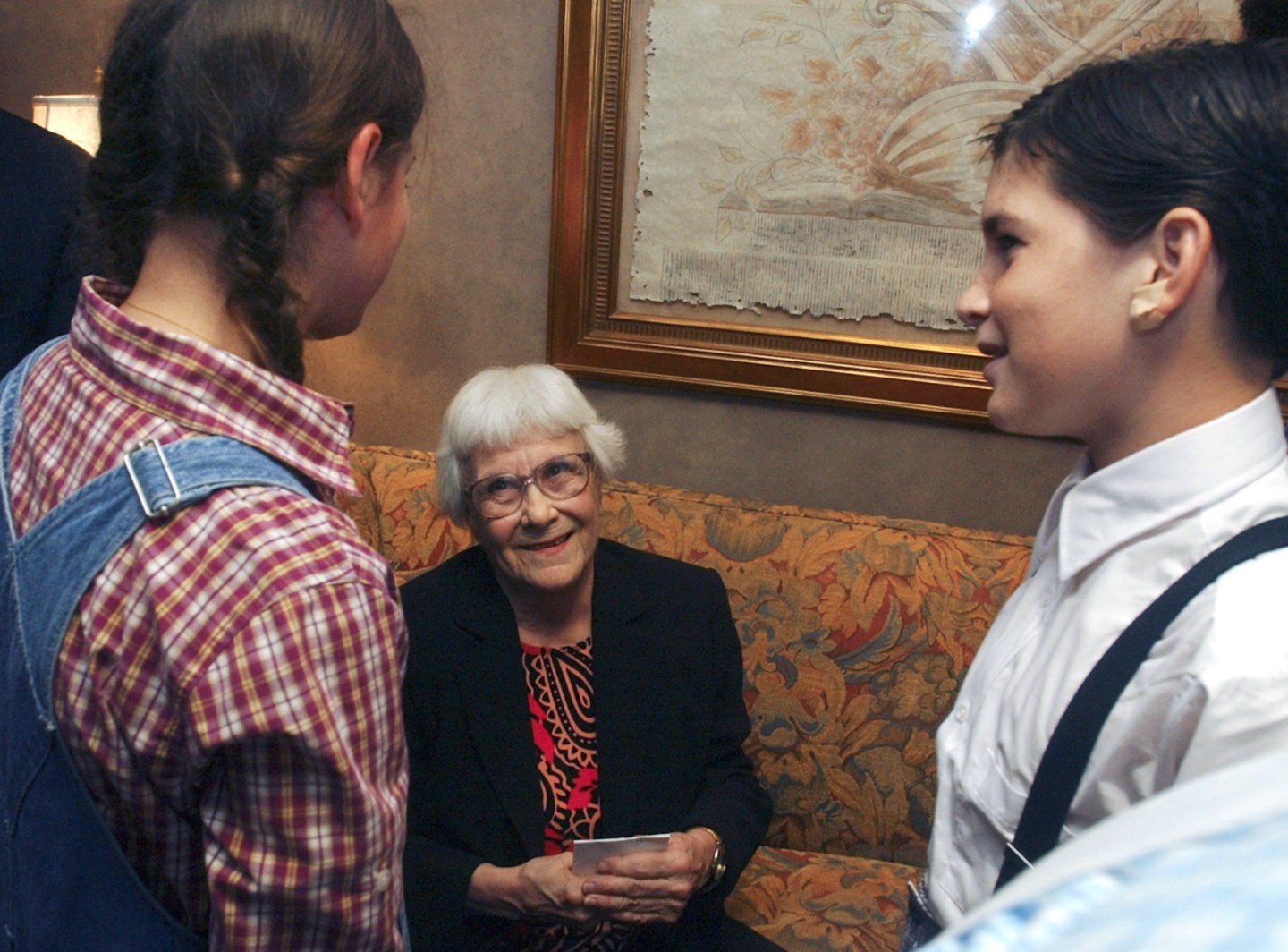 "To Kill A Mockingbird," author Nelle Harper Lee, center, visits with Regan Stevens,left, and Alex Trulock, Wednesday, Sept. 13, 2006, students from Mountain Brook High School, who arrived in their costumes at the reception for Lee at the Alys Robinson Stephens Performing Arts Center in Birmingham, Ala. The students are working on a production of "To Kill A Mockingbird." Lee received a Lifetime Achievement Award from The Birmingham Pledge Foundation. (AP Photo/The Birmingham News, Linda Stelter) ** MAGS OUT, INTERNET OUT, SALES OUT **
Photograph by Linda Stelter — The Birmingham News/AP

“I wanted you to see,” says Atticus Finch in the novel To Kill a Mockingbird, “what real courage is… It’s when you know you’re licked before you begin but you begin anyway and you see it through no matter what. You rarely win, but sometimes you do.”

Courage may not be the most precise word for what Nelle Harper Lee is doing, but it is certainly amazing. At age 88, more than 50 years after the release of her 1960 novel, the author is set to publish a sequel to To Kill a Mockingbird. The new book, which was written back in the 1950s, before To Kill a Mockingbird, is called Go Set a Watchman.

Upon announcement of the sequel on Tuesday, To Kill a Mockingbird shot up to no. 2 in Apple’s iBooks store. On Amazon, it currently ranks no. 3 in all books, while the sequel, available for preorder, is no. 1 overall. “This is a remarkable literary event,” said Harper publisher Jonathan Burnham in yesterday’s press release. “The existence of Go Set a Watchman was unknown until recently, and its discovery is an extraordinary gift.”

To Kill a Mockingbird has endured like no other modern classic. It is thought to have sold more than 40 million copies, though Hugh Van Dusen, Lee’s editor at HarperCollins, told New York’s Vulture blog, “No one is really sure how many copies it has sold since publication… it’s more than [40 million], but roughly in that neighborhood.” The book will have an enormous first printing of 2 million copies, which is nearly unprecedented, and not far from the 4.8 million-copy first run of the fourth Harry Potter book, reportedly the largest first printing ever. Mockingbird sells more copies every year than The Catcher in the Rye, more than The Great Gatsby, more than 1984.

And there is hope that this new book can serve as a rising tide that buoys all sales, rather than giving just HarperCollins a single hit. “This is welcomed news for everybody who works in publishing,” says Paul Bogaards, who is Knopf Doubleday’s executive VP of media relations and a popular figure among literary circles on Twitter. “Any book that drives traffic into stores is good for the industry as a whole. It’s an opportunity for retailers to merchandise other books, capture other sales. I know some have said about these big book publications that customers come in, ask for the title in question, and leave, and that there is no ripple. But I think we’re living in an era of extremely well curated bookstores, and all of them are going to seize this opportunity.”

The new book’s publication date in the height of summer—July 14 of this year—is another savvy move, since it is the time of year when children are reading for school, and adults are reading for pleasure. Bogaards predicts that the timing, “will result in a lot of creative table initiatives from booksellers.” (Don’t be surprised, either, if the next bit of news, before the book is even out, is that it’s been optioned for a film.)

The release of this book should help kill, once and for all, a longtime conspiracy theory that some see as both inane and sexist: that Lee’s close friend Truman Capote, not Lee, wrote To Kill a Mockingbird. “Let’s be honest,” writes Allen Wastler in a CNBC op-ed, “the success [of Go Set a Watchman] will be fueled, at least in part, by a conspiracy theory.”

Dr. Wayne Flynt, professor emeritus of history at Auburn University and a Lee scholar, described the rumor and its provenance to NPR’s “All Things Considered” in 2006: “Some claim Pearl Belle, who is a literary critic and editor in Cambridge, Massachusetts, has actually claimed that Capote implied to her that he had written the book or had a good deal to do with the writing of the book. I think probably the rumor results from the fact that To Kill a Mockingbird is the only published book that Harper Lee ever did.” If that latter point is what has fueled the rumor for so many years, the publication of a second work by Lee should certainly dispel it. And in that regard, the sequel is also a wonderful thing for women authors everywhere.

Amidst all the delighted response to news of the new book, there is nonetheless a minor controversy brewing: the notion that Lee may not have wanted this book published. After all, it was written before To Kill a Mockingbird, but was shelved at the urging of Lee’s editor at the time. And Lee, quoted in the HarperCollins press release, says, “In the mid-1950s, I completed a novel called Go Set a Watchman. It features the character known as Scout as an adult woman and I thought it a pretty decent effort. My editor, who was taken by the flashbacks to Scout’s childhood, persuaded me to write a novel from the point of view of the young Scout. I was a first-time writer, so I did as I was told.”

Many people on Twitter are pointing to a 2011 letter in which Lee’s now deceased sister, Alice, wrote, “Poor Nelle Harper can’t see and can’t hear and will sign anything put before her.” The questions about her health and faculties are, “why I hesitate to celebrate” the new book, tweeted Andrew Ba Tran of the Boston Globe. A Jezebel.com headline today tells readers to “be suspicious” of the new novel because of these health concerns.

Another, simpler fear some fans may have is simply that the sequel may ruin the legacy of the first book. (For example, Closing Time, the 1995 sequel to Joseph Heller’s classic 1961 war satire Catch-22, never quite caught on with readers.) But Bogaards speculates, “It’s not going to change the way people feel about To Kill a Mockingbird. Whatever conclusions readers arrive at for the new novel will be based on their experience with that novel. But certainly the expectations for this new novel are high.”

The expectations are high, in fact, for the whole publishing industry.