Why Europe should back Greece’s debt swap plan 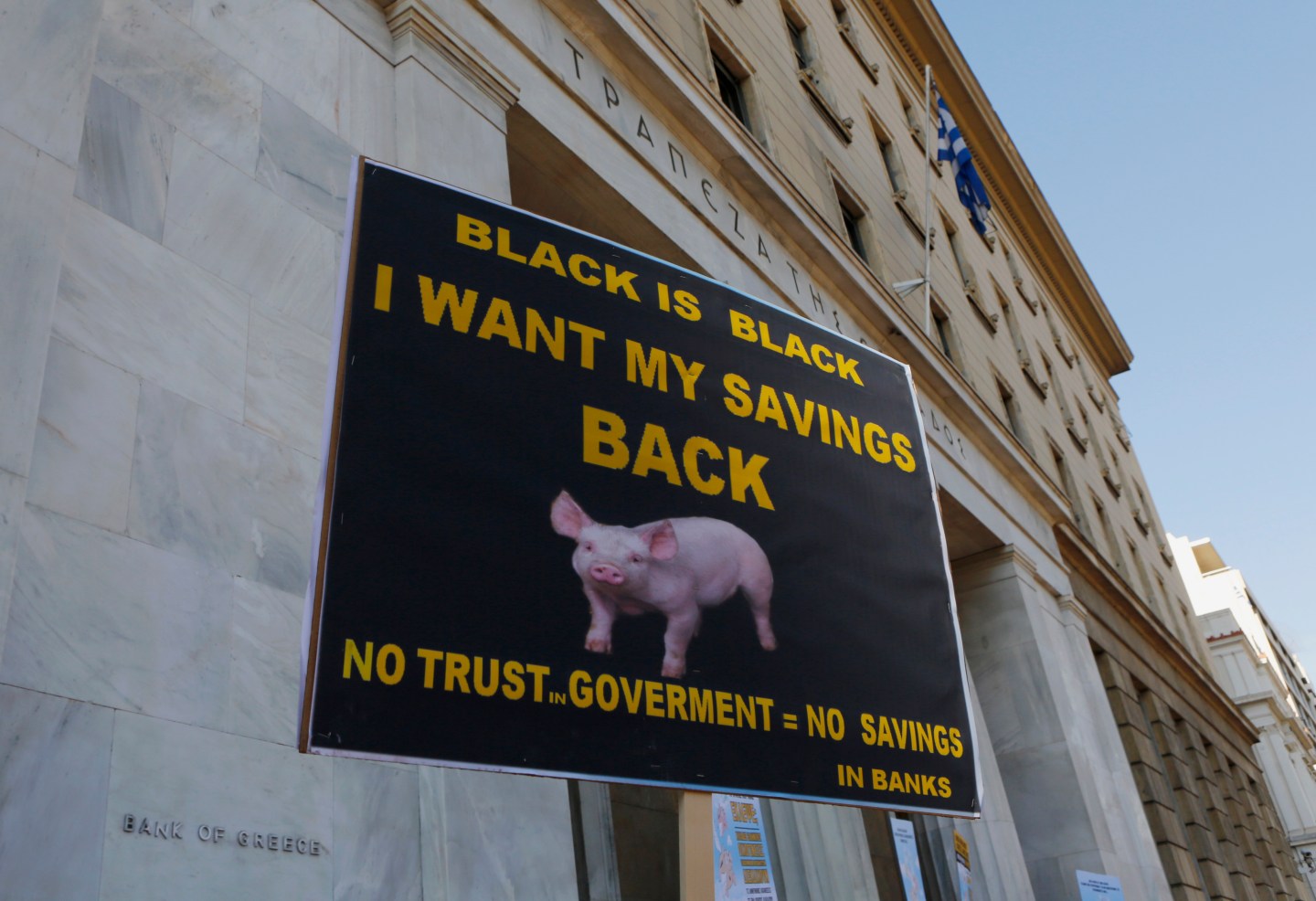 A Greek bondholder holds a sign as he takes part in a protest outside the Central Bank of Greece in Athens October 31, 2012. Bondholders protested against their inclusion in a debt swap that they said wiped out much of the savings which they had invested in Greek government bonds. REUTERS/Yannis Behrakis (GREECE - Tags: BUSINESS CIVIL UNREST) - RTR39SYK
Photograph by Yannis Behrakis — Reuters

On Tuesday, Greece Finance Minister Yanis Varoufakis said he would be willing to back away from defaulting on the debt-troubled country’s bailout loans. Instead, he suggested swapping old debt with new bonds that would be repaid only as Greece’s economy grows.

This is a sensible approach and one that Greece’s lenders should consider accepting. It would not just be the moral thing to do, but a smart business move as well.

Greece is insolvent. As any professional lender knows, when a company goes bankrupt, the best course of action is not to force it to take on even more debt but to restructure the existing loan to make repayment possible. Cost-cutting is also necessary but only so far as it doesn’t hamper the business to such an extent that the company ceases to be a viable enterprise. If that happens, everybody loses. The same goes for a nation, but Greece’s lenders seem more intent on pushing the country further down the hole of bankruptcy and helplessness than in helping it get out of it.

In the current structure, in order to satisfy its lenders, consisting of the European Central Bank, the European Commission, and the International Monetary Fund (informally known as the Troika), Greece is being asked to borrow more money topay down its current debt and adopt money-saving measures that can generate budget surpluses of 7.2% of GDP for the next 15 years. The goal is to reduce Greece’s debt from 175% of GDP to 60% of GDP.

The problem is that extreme austerity measures may not only impact individual households, but could also have a chilling effect on business. Without the upkeep of government services and national infrastructure that makes commercial activity possible, Greece’s economy is sure to shrink even faster. That means its debt burden as a percentage of GDP will not decrease over time but actually increase, especially since the country’s GDP has already fallen by 40% since 2009. This could keep Greece insolvent for decades to come and relegate it to a failed state.

Varoufaksit’s proposal of replacing its debt with perpetual bonds linked to economic growth and target surpluses of 1.5% would enable the nation to repay its debt in a more realistic fashion.

To be fair to the Troika, they are concerned about setting a bad precedent by letting Greece off the hook for its fiscal irresponsibility, which is valid. Greece’s economy has suffered from overregulation, bureaucratic lethargy, a faulty tax regime, inefficient social safety nets, and other problems for a long time. Expecting the nation to address these issues as a condition to renegotiate its debt is reasonable.

But imposing draconian conditions, which would only worsen the Greek crisis and cause an eventual default, is counterproductive. It’s debatable how much damage a Greek default and exit from the eurozone would be for the rest of Europe, but what is not debatable is that the EU should opt for the smart business principle of working with the borrower on a solution rather than against it.

Watch more coverage about the Eurozone from Fortune’s video team: