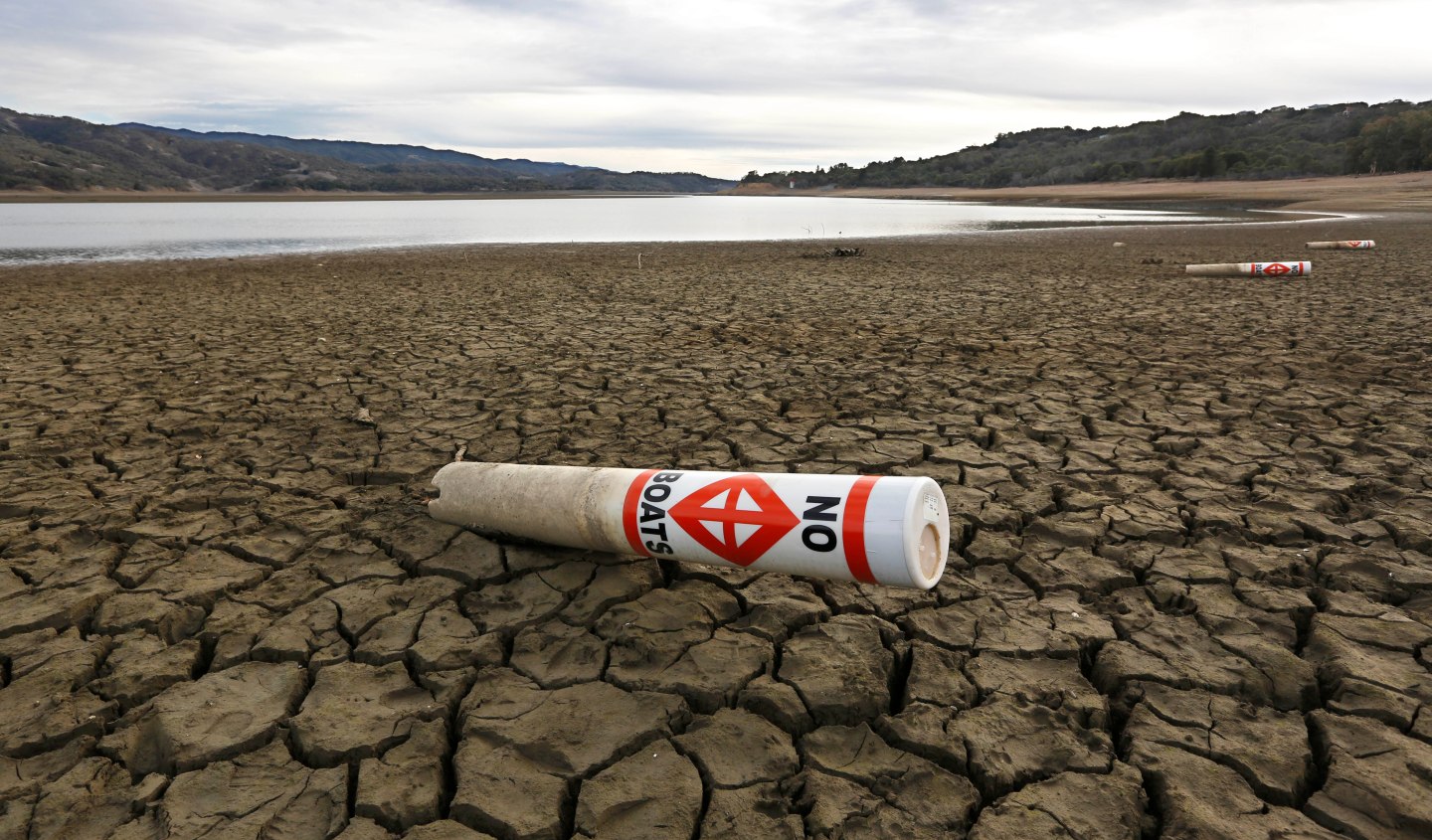 In this Feb. 4 2014 file photo, a warning buoy sits on the dry, cracked bed of Lake Mendocino near Ukiah, California.
Photograph by Rich Pedroncelli — AP

The drought in California is heading into its fourth year with no end in sight. The situation has gotten so bad, experts say it’s the area’s worst drought in 1,200 years.

Even President Obama gave reference to drought conditions in his recent State of the Union Speech.

Winter months have dumped much needed rainfall in the state, but 98 percent of California remains in drought, with 32 percent in extreme drought conditions. And it would take a whole lot of rain to ease the pain. It’s estimated that California would need some 11 trillion gallons of water to eliminate the drought conditions.

As surface and groundwater supplies dry up, the lack of rainfall is taking an economic toll. Last year, more than 99 percent of California’s $43 billion agricultural sector experienced severe, extreme, or exceptional drought.

That translated into costing the state’s agriculture sector around $1.5 billion in losses from unplowed fields, dead livestock, worker layoffs, and rising costs of water.

While December and January’s rainfall brought some hope, the outlook remains bleak, said Scott Rawlins, director of regulatory and government affairs at Wilbur-Ellis, a distributor and marketer of agriculture products.

“Going into 2015 I think things are better because of the recent rains, but we’re a long way from being out of the woods on the drought,” Rawlins said.

“We had half a million acres of unplanted crops because of the drought, and with California producing so much of the nation’s fruits and vegetables, I think we’ll face shortages of those products,” Rawlins explained.

Where are the higher prices?

California farmers produce half of the nation’s fruits and vegetables, and most of its high-value crops such as broccoli, tomatoes and artichokes. So it would seem logical that as the drought bakes the Golden State, food prices would naturally rise as hundreds of thousands of farm acres lay fallow.

But imports of fruits and vegetables along with the nation’s agriculture industry have helped American consumers mostly dodge the higher food prices, said James Booker, professor and department chairperson of economics at Siena College.

“The U.S. is a geographically diverse nation, with different producing regions frequently experiencing very different weather conditions,” Booker explained. “Coupled with our food supply being increasingly globalized, these two factors continue to work to limit impacts of weather and rainfall on total food production and costs.”

“Food inflation was around historical averages for 2014, coming in at 2.25 percent to 3.25 percent,” said Umar Sheikh, a food industry expert from Euler Hermes, a provider of trade credit insurance.

“Some specific items, such as beef and pork, saw considerably higher prices, though that was largely due to disease in pigs in other parts of the country and a very low cattle population across the nation,” Sheikh added.

However, the global interplay of agriculture works both ways. A study from Canada’s province of British Columbia said the drought in California could have pushed up prices of fruits and vegetables there by 34 percent by the end of 2014 due to lower supplies imported from the state.

There could be more shortages with rising prices ahead as nearly 25 percent of California’s $5 billion rice crop for 2014 is likely lost due to lack of water, say experts.

And one of California’s signature products, wine, will see price increases in the coming months said Rowan Gormley, founder of California based NakedWine, an online wine retailer.

“The scarcity of water will likely push up prices for wines, especially some of the cheaper ones,” Gormley said.

There’s no shortage of misery for many California residents. Moisture reductions have led to mandatory limits in several counties on watering lawns, washing cars, available drinking water and fights over who owns groundwater supplies in the state’s messy water right laws. Farmers and residents have seen their water bills go up.

And the unemployment in the state’s agriculture industry has forced many local towns to the financial edge, say experts.

“Parts of California, like the Central Valley, Low Desert, and Central Coast, have already been impacted, with more people needing welfare, food banks, and other support,” said Milt McGiffen, a crop specialist at the University of California, Riverside.

“We are already seeing more government programs and charities reaching out to help, “ McGiffen said.

Some farmers have said if the state doesn’t get rain this year, they could be forced out of business.

There are even reports of water theft through the diversion of water sources or out and out pumping of water from fire hydrants.

Meanwhile, conservation efforts to reduce water usage have had limited affect. To beef them up, the state imposed a 20 percent reduction usage goal by 2020.

In 2014, the U.S. Department of Agriculture began a program to provide up to $100 million in livestock disaster assistance, and an additional $10 million for water conservation.

But more could be done now, said Jeff Lipton, marketing director for California based WaterSmart, a software company that develops water monitoring solutions.

“People chronically underestimate their water consumption by a factor of at least two,” said Lipton. “This leads people to undervalue changes in behavior that can have a dramatic impact on water-use efficiency.”

Beyond conservation, most experts say it’s a matter of hoping for the best and praying for rain.

But droughts are nothing new to California and other parts of the Southwest United States, and more are likely to come after this one ends. Solving the ongoing crisis then becomes one of thinking ahead, said UCR’s McGiffen.

“The real 900-pound gorilla in the room is population growth,” McGiffen said. “As long as we keep increasing population and do not come up with a big breakthrough to produce more water, the problem will get worse.”