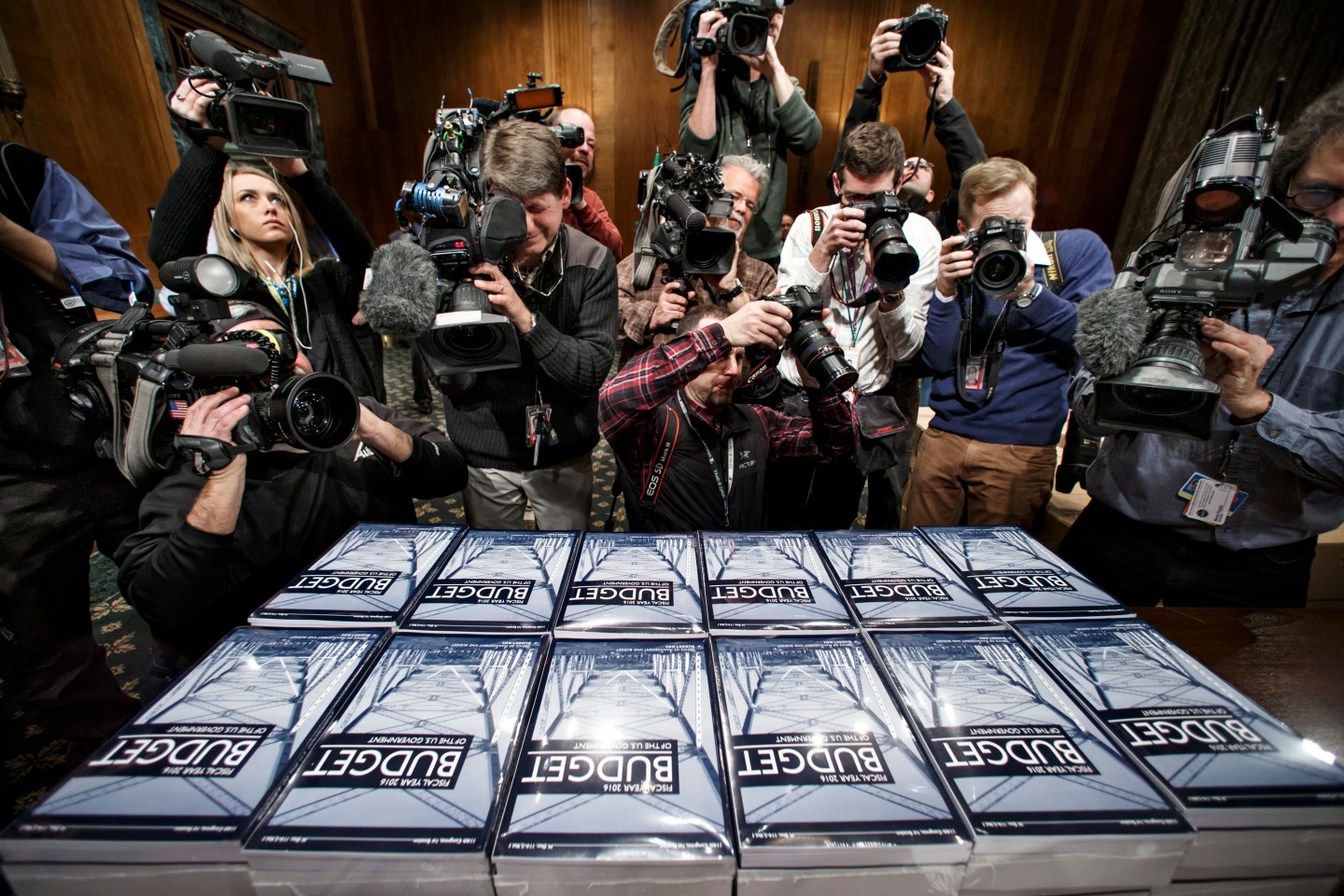 Media surrounds as President Barack Obama's new $4 trillion budget plan is distributed by the Senate Budget Committee as it arrives on Capitol Hill in Washington, Monday, Feb. 2, 2015. The fiscal blueprint for the 2016 budget year that begins Oct. 1, seeks to raise taxes on wealthier Americans and corporations and use the extra income to lift the fortunes of families who have felt squeezed during tough economic times. Republicans, who now hold the power in Congress, are accusing the president of seeking to revert to tax-and-spend policies that will harm the economy while failing to do anything about soaring spending on government benefit programs. (AP Photo/J. Scott Applewhite)
Photograph by J. Scott Applewhite — AP

President Barack Obama’s free community college plan stole the education spotlight, but his $4 trillion budget for next year contained another proposal that could alter higher education for many Americans.

The President proposed closing a loophole that allows for-profit colleges’ to cash in on veterans’ GI Bill benefits.

As it stands now, for-profit colleges must abide by the so-called 90-10 rule, which keeps them from getting more than 90% of their operating revenue from federal student aid money. But that rule doesn’t consider GI Bill benefits government funding. Meanwhile, veteran enrollment at for-profit colleges has soared. Thirty-one percent of veterans attended for-profit schools in 2013, up from 23% in 2009, giving such institutions access to $1.7 billion in post-9/11 GI Bill benefits in the 2012-2013 academic year, up from $640 million in 2009-2010. Obama’s budget proposal aims to curb that trend by counting veterans’ education benefits toward for-profit schools’ federal money cap.

If the GI Bill loophole were closed, dozens of for-profit institutions would be in violation of the 90-10 rule, according to a Department of Education analysis, which found that 133 for-profit schools receive more than 90% of their revenue from a combination of Pell Grants, Stafford Loans, and GI Bill funds.

Senate Democrats have tried to rein in for-profits colleges’ access to GI Bill benefits in the past, but such efforts have gone nowhere (and with Congress controlled by Republicans, Obama’s budget could meet a similar fate.)

For-profits’ recruitment of veterans—especially those from the post-9/11 era, whose education benefits cover $19,000 per year in tuition for four years—has raised red flags with some lawmakers and the Obama administration because such institutions report poor graduation rates and are more expensive for the taxpayers funding the GI Bill. Tuition is $10,900 per year at a for-profit, compared to $4,900 at public colleges. Students who attend for-profits are also more likely to incur student debt: 88% of students at for-profit colleges held student loans in 2012, compared to 66% of public college students and 75% of students who attended private colleges, according to The Institute for College Access and Success.

On Monday, Senator Dick Durbin, a Democrat from Illinois who in 2012 proposed a bill to alter the way federal funds are allocated to for-profit colleges, said in a statement that “closing the 90/10 loophole will put an end to the powerful incentive for-profit colleges currently have to aggressively recruit service member and veterans. The exclusion of billions of dollars from the Departments of Defense and Veterans Affairs in the federal 90/10 rule has led to well-documented cases of exploitation of servicemembers and veterans by for-profit colleges.”

The Association of Private Sector Colleges and Universities opposes Obama’s budget proposal and the 90/10 rule in general, says Michael Dakduk, the group’s vice president of military and veteran’s affairs. The rule, he says, is arbitrary and does not indicate a school’s quality, but instead measures the socioeconomic position of a institution’s student population.