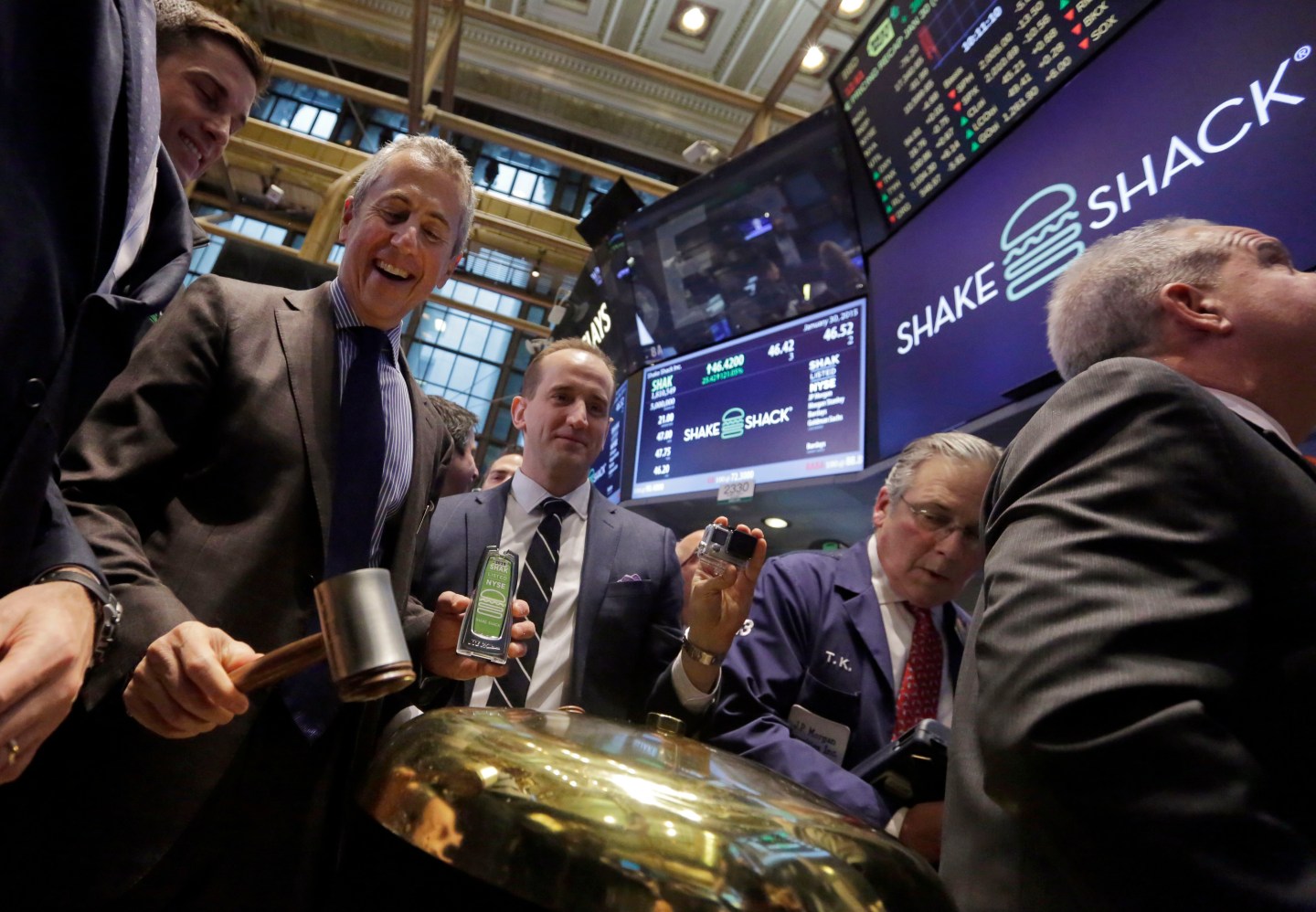 Shares of the newly-public burger chain he leads surged in their first day of trading Friday, jumping more than 130% above the initial offering price that was set on Thursday evening. To commemorate the big news, he will of course eat a burger.

“I intend to eat [the ShackMeister Burger] tonight for dinner,” Garutti told Fortune in an interview conducted shortly after the New York-based restaurant company’s shares started trading Friday morning. That burger is a 100% all-natural Angus beef cheeseburger with shallots that are marinated in a Brooklyn Brewery beer.

Garutti has much to celebrate today, as his 2.7% stake in the company is now worth more than $46 million.

Fast-casual chains such as Shake Shack often debut strongly when going public. The thinking is newer “fast-casual” food chains, such as Chipotle (CMG), are more in tune with changing consumer preferences than older fast-food chains such as McDonald’s (MCD).
[fortune-brightcove videoid=4023185934001]

Although there are some concerns about how Shake Shack intends to profitably grow from the 36 restaurants that exist in the U.S. today to the 450 it hopes to operate in the future, Garutti said the company will benefit from a what he sees as a permanent shift in what diners are looking for when they eat out of their homes.

“The strength we have is that the industry is in a seismic shift,” Garutti said. “My generation and my children’s generation aren’t going to eat fast food. That’s the big opportunity.”

The 39-year-old said younger diners are more knowledgeable about where their food comes from — and what is in their food — than any other generation. He said they like Shake Shack because the company doesn’t use hormones or antibiotics in its food.

“I don’t think the legacy fast food chains have the opportunity to capture that story,” Garutti said.

To get to 450 locations, Shake Shack is going to go outside its comfort zone. Many of the restaurants the company operates are in Manhattan and other East Coast locations. It recently entered the Chicago and Las Vegas markets, and later this year will open a restaurant in Austin, Texas. Garutti said Shake Shack doesn’t see a major metropolitan area that couldn’t have a Shack some day.
[fortune-brightcove videoid=4018821662001]

And as Shake Shack expands, the company intends to champion local products. It’s a strategy that is already used in New York, where local beers are on the menu. In Philadelphia, Shack has teamed up with Federal Donuts, and in Chicago the company uses sausage made by local restaurant The Publican. Although the core menu guides the company, local partnerships are a way the restaurant chain can innovate.

Looking ahead, the three greatest focus points for Shake Shack are to continue to secure ideal real estate for new locations, stay ahead of the curve on supply chain, and also develop the right talent for its team.

Talent development is “a challenge for any business,” Garutti said, “but also where we grew up and our sweet spot. It is where we are going to focus most of our energy.”