The bitter battle over a giant Canadian oil pipeline (no, not Keystone—an even bigger one) 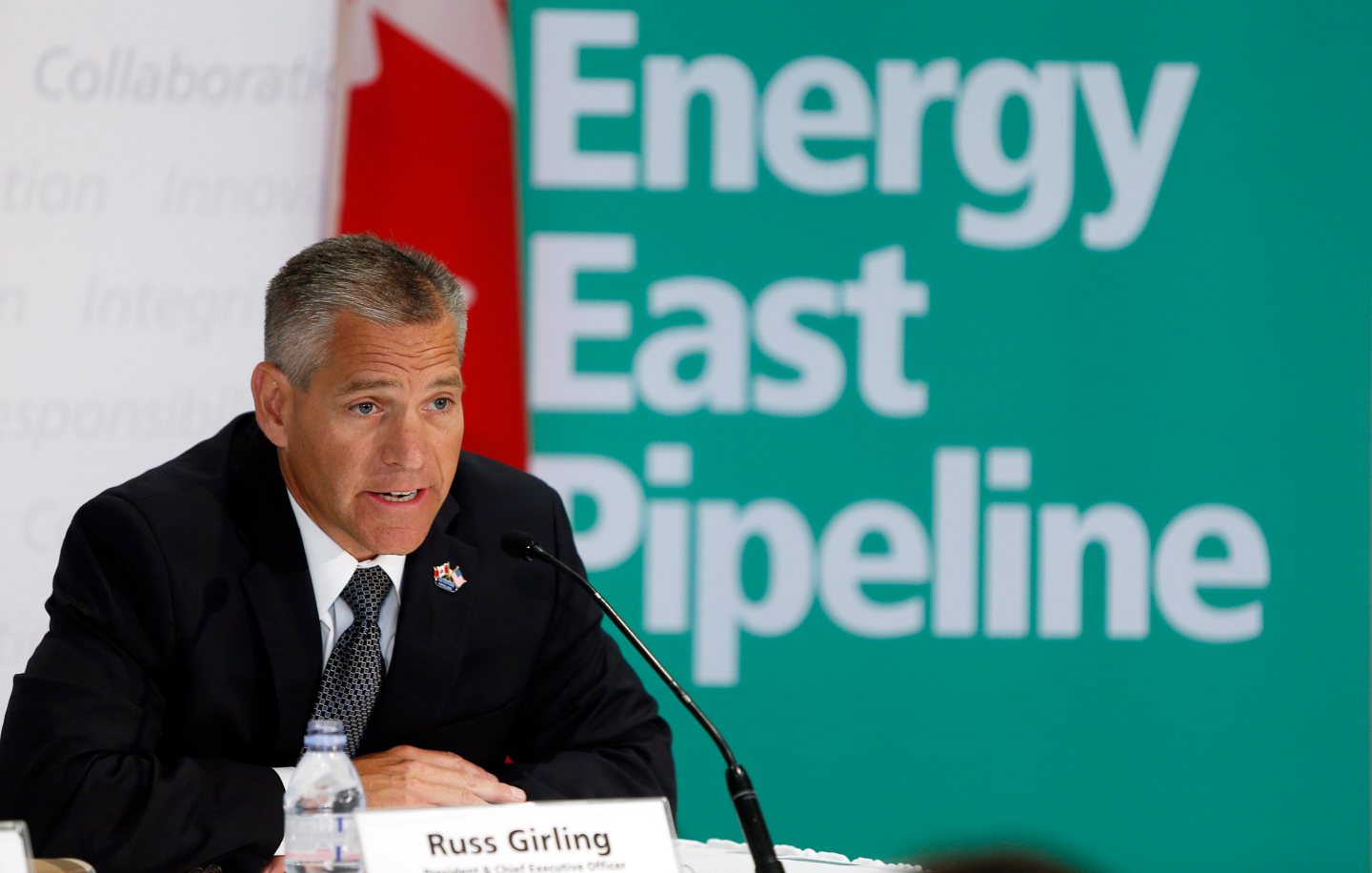 The planned transcontinental pipeline would be nearly 3,000 miles long, would cost billions of dollars to build, and would carry heavy crude oil from Western Canada to world markets. Once considered a no-brainer by oil industry executives, it has become a hot-button national political issue and a flashpoint in the debate over fossil fuels and climate change. Industry officials describe it as critical to the profitability of the large oil sands projects. Opponents argue that the environmental costs are wildly disproportionate to the actual market demand. And not a foot of it crosses U.S. soil.

In case you hadn’t guessed, we’re not talking about Keystone. Though just about everyone in Washington, D.C. is right now.

The multi-year fight over the controversial Keystone XL pipeline—which would carry crude south from the oil sands of Alberta, Canada, to U.S. Gulf Coast refineries—reached a crucial juncture on Thursday: The newly Republican-controlled Senate passed a bill approving the project by a vote of 62-36. President Obama is almost certain to veto the bill when it reaches his desk, however, assuring that the partisan battle over the project will continue.

But even as the Keystone debate rages on inside the Beltway, there is growing resistance in Canada to a proposed pipeline that is so far little-known to Americans. Dubbed Energy East by Canadian power and infrastructure giant TransCanada (TRP), the pipeline would be more than twice as long as Keystone and would carry oil east, across Canada, to refineries in Ontario and Quebec and, ultimately, to a new export terminal at Saint John, New Brunswick.

Energy East—estimated to cost nearly $11 billion—would be among the most ambitious and expensive natural pipelines ever built, transporting 1.1 million barrels a day of heavy, dirty oil-sands crude, known as bitumen. (By comparison, Keystone would carry 800,000 barrels per day.) To build Energy East, TransCanada plans to convert 1,800 miles of existing natural gas pipeline to carry oil and construct another 1,000 miles of new pipeline.

Like every other major energy project, of course, Energy East has lately become caught up in the growing turmoil in world oil and gas markets, as U.S. production continues to surge, OPEC wages a price war to force marginal, high-cost production (including from the Canadian oil sands) out of the market, and the price of a barrel of oil lingers below $50.

“We know that we need more pipeline capacity and both Keystone and Energy East are part of that solution and they need to get done to get that crude to market,” TransCanada CEO Russ Girling told reporters at a press conference last fall, when the company filed its formal project application with the country’s National Energy Board. “Demand for these projects is increasing as production increases in North America.”

Demand from companies producing oil in Western Canada is certainly increasing. Where the demand is going to come from at the other end of Energy East, however, is less clear.

In some ways approval for Energy East ought to be simpler to obtain than for Keystone XL, which has been caught up for more than six years in court battles and political posturing. Energy East has the full support of the Conservative government of Prime Minister Stephen Harper, who has made strong support for Canada’s oil and gas industry a central part of his governing platform. Parliamentary maneuvers, meanwhile, are largely irrelevant: authority to approve the project lies with the National Energy Board, the independent federal agency that reviews all major energy infrastructure projects.

And the oil sands industry—expected to produce 2.3 million barrels of oil day in 2015 and strapped by limited rail capacity to get it to the large cities of the East and to thirsty world markets beyond—desperately wants new transport capacity. “Many people in the industry feel that Energy East is a second-best alternative in case nothing is happening with Keystone,” says John McGrath, a communications consultant working with the Ontario provincial government.

“There’s obviously a willingness to quickly approve these projects because of the limited capacity of the tar sands industry to transport oil from Alberta,” says Patrick Bonin, a Montreal-based climate and energy campaigner with Greenpeace. “Without any proper capacity to move the oil by train, they need that pipeline. The government has shown its intention of moving quickly forward, and it’s a demonstration of the influence of the oil industry on the federal government.”

Roadblocks have multiplied in the last year, however, mainly at the provincial level. Calling TransCanada’s environmental permit application “incomplete,” Ontario’s Energy Board has asked for more information on possible impacts from the pipeline, which is planned to cross multiple waterways in Ontario. In Quebec, which has become the center of climate change activism in Canada and in 2013 launched its own cap-and-trade system for carbon emissions, public support for the project has dwindled to less than 40%, according to polls. Work on the Cacouna Marine Terminal, an export facility planned for Quebec’s east coast, has been postponed by concerns over the calving grounds of the beluga whale, which was designated an endangered species in November.

Opposition has also come from an unexpected source: the oil and gas industry. Specifically, three local natural gas utilities in eastern Canada have demanded that TransCanada amend its proposal, claiming that western producers are effectively asking natural gas customers to subsidize their transportation infrastructure. Portions of the proposed Energy East pipeline currently supply natural gas to users in Ontario and Quebec. In an interview with the Toronto Globe & Mail, Girling dismissed the gas companies’ objections as “ludicrous.”

Ultimately, as with Keystone, it may be market forces, rather than political or public opposition, that doom or reshape the Energy East project. With oil prices languishing below $50 a barrel, high-cost production from the oil sands looks a lot less economical. High labor and production costs make oil from the oil sands more expensive to produce than conventional sources. Less crude oil coming out of Western Canada would mean less need for multi-billion-dollar pipeline projects, whether they head south or east.

So far, Canadian producers have vowed to increase, rather than cut, production in the face of low prices. The Canadian Association of Petroleum Producers issued a forecast on Jan. 21 that said capital investment in western Canada oilfields would be slashed by $23 billion in 2015—but production will continue to grow thanks to aggressive investments over the last half-decade. That means millions of barrels more of expensive-to-produce heavy crude will hit a saturated market over the next few years. That’s no deterrent to TransCanada, which makes its money from transport fees, regardless of the price of oil.

“Energy East is still years away from going into operation, and yet there is a line-up of shippers expressing their desire to use the pipeline,” asserts Francois Poirier, the TransCanada executive in charge of the Energy East project. “We already have firm, long-term contracts to deliver about one million barrels per day once Energy East opens for business.”

If the economic arguments for the pipeline waver, though, the environmental argument against massive new oil infrastructure starts to carry more weight. And the notion that Europe will welcome imports of Canadian oil is flawed: western Canada oil barely survived a vote last December by the European Union that would have imposed stiff penalties on high-carbon petroleum imports, including bitumen.

“It challenges Canadians’ sense of goodwill when the federal and Alberta governments speak of the national benefits of the expansion of the oil sands but expect the rest of the country to reduce emissions while Alberta does not,” wrote the authors of a recent report from the Mowat Centre, a public policy think tank based at the University of Toronto, entitled “The Politics of Pipelines.”

Still, as opponents of Keystone XL have discovered, massive oil infrastructure projects are hard to kill. And it’s entirely likely that, while the attention of Americans is drawn to the route south through the U.S., the pipeline going east to the North Atlantic will become reality.