Michelle Obama’s fashion in Saudi Arabia: “Not an act of defiance” 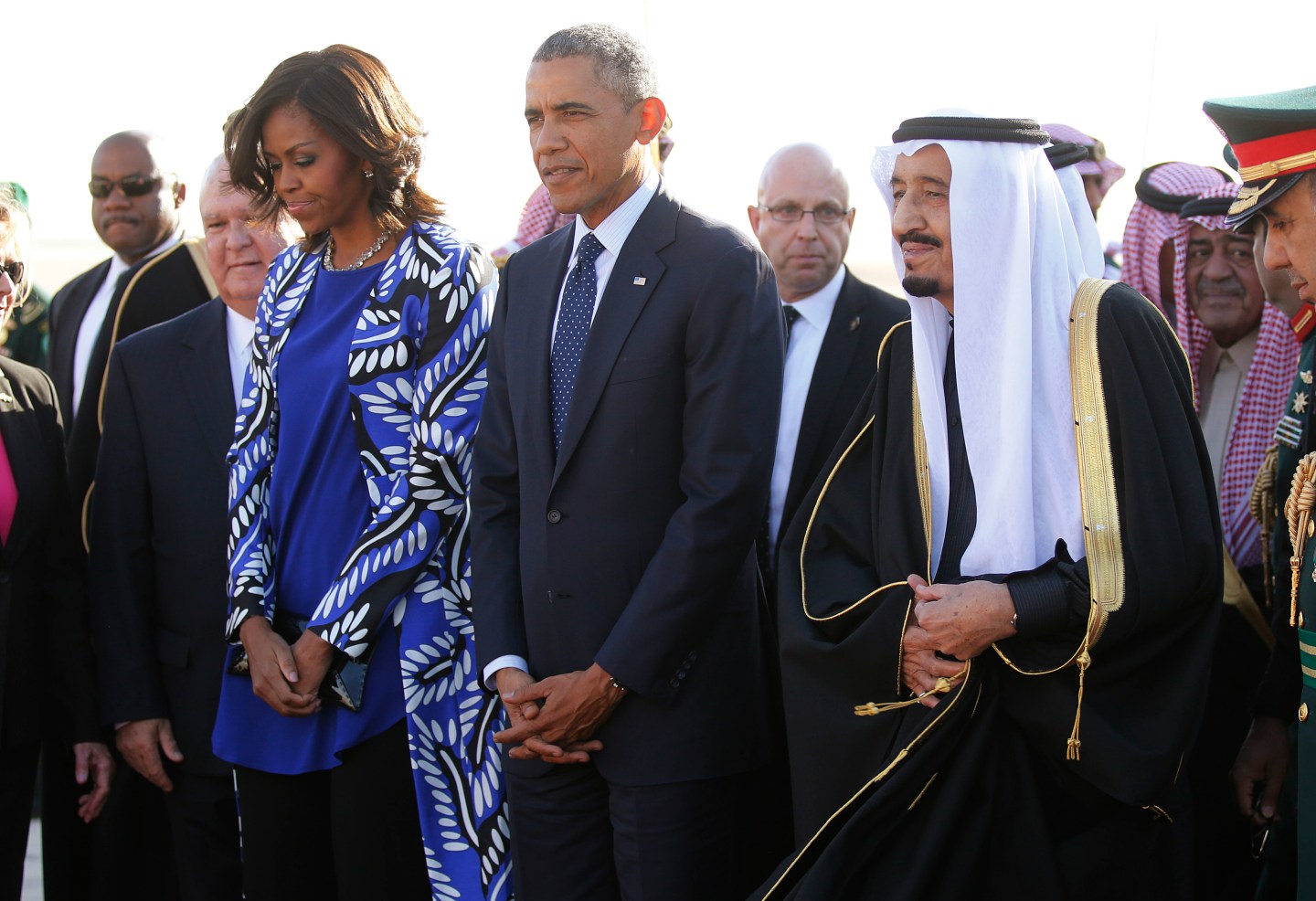 U.S. President Barack Obama and first lady Michelle Obama are greeted by Saudi Arabia's King Salman (R) as they arrive at King Khalid International Airport in Riyadh, January 27, 2015. Obama is stopping in Saudi Arabia on his way back to Washington from India to pay his condolences over the death of King Abdullah and to hold bilateral meetings with King Salman. REUTERS/Jim Bourg (SAUDI ARABIA - Tags: POLITICS ROYALS TPX IMAGES OF THE DAY BUSINESS) - RTR4N4SF
Photograph by Jim Bourg — Reuters

This was originally published on Muslimgirl.net.

Michelle Obama chose not to cover her head as she visited American ally Saudi Arabia to pay her condolences to the oppressive royal family for the death of King Abdullah.

People found it bold. Courageous. Revolutionary. Many applauded her. She was hailed by media as an example of the oppressive policies on women in Saudi Arabia. Because Saudi women haven’t been talking enough about it. (Twitter, anyone?)

Many Westerners living in Saudi Arabia are not required to cover their hair. They are required to dress modestly — however, their hair can go completely uncovered. This contrasts strongly to women of Saudi, Pakistani, and other brown backgrounds, whose choices are regulated and controlled by the U.S.state-sponsored royal family. What revolutionary defiant message is sent out when an American woman can so confidently walk the soil of a land that limits its own woman? Is it a religious one, or does it only reaffirm what many of us Muslim women already knew?

What good is a reminder by a woman who represents a country that makes the oppressive nature of Saudi Arabia possible every single day? What reminder can the First Lady of the United States of America, a strong ally of Saudi Arabia, who is fully aware of the oppressive nature of the family she is going to comfort, give to the world? Her presence reaffirms what many women living in Saudi Arabia already knew; a Western woman can always walk around the cities of Saudi Arabia with more freedom than the locals. She will never be asked why she isn’t covered, why part of her hair is peeking out; no religious police will think about hitting her ankles. She will serve as a stark reminder of what the West embodies to the average citizen: an undisputed access to power of choice that a Saudi woman does not have.

Our bodies have always been the first to be sacrificed when the geographies of power are at play.

Authoritative entities will always use religious vocabulary to keep women down, but, in the end, some women will stand freer than the rest. And that is not defined by culture, religion, or by land — but simply by who owns the chess pieces and who owns the game. Many women do not have the right of choice because their government has instituted and funded an understanding of religion and culture that ensures that they remain in power.

It was not an act of defiance when the First Lady showed up in Saudi Arabia without a headscarf. She only tells Muslim women what they already knew: that some women stand above them. Above the royal family. Above their daily fight for having the simplest of choices.