Will 2015 be a blockbuster year for tech IPOs? 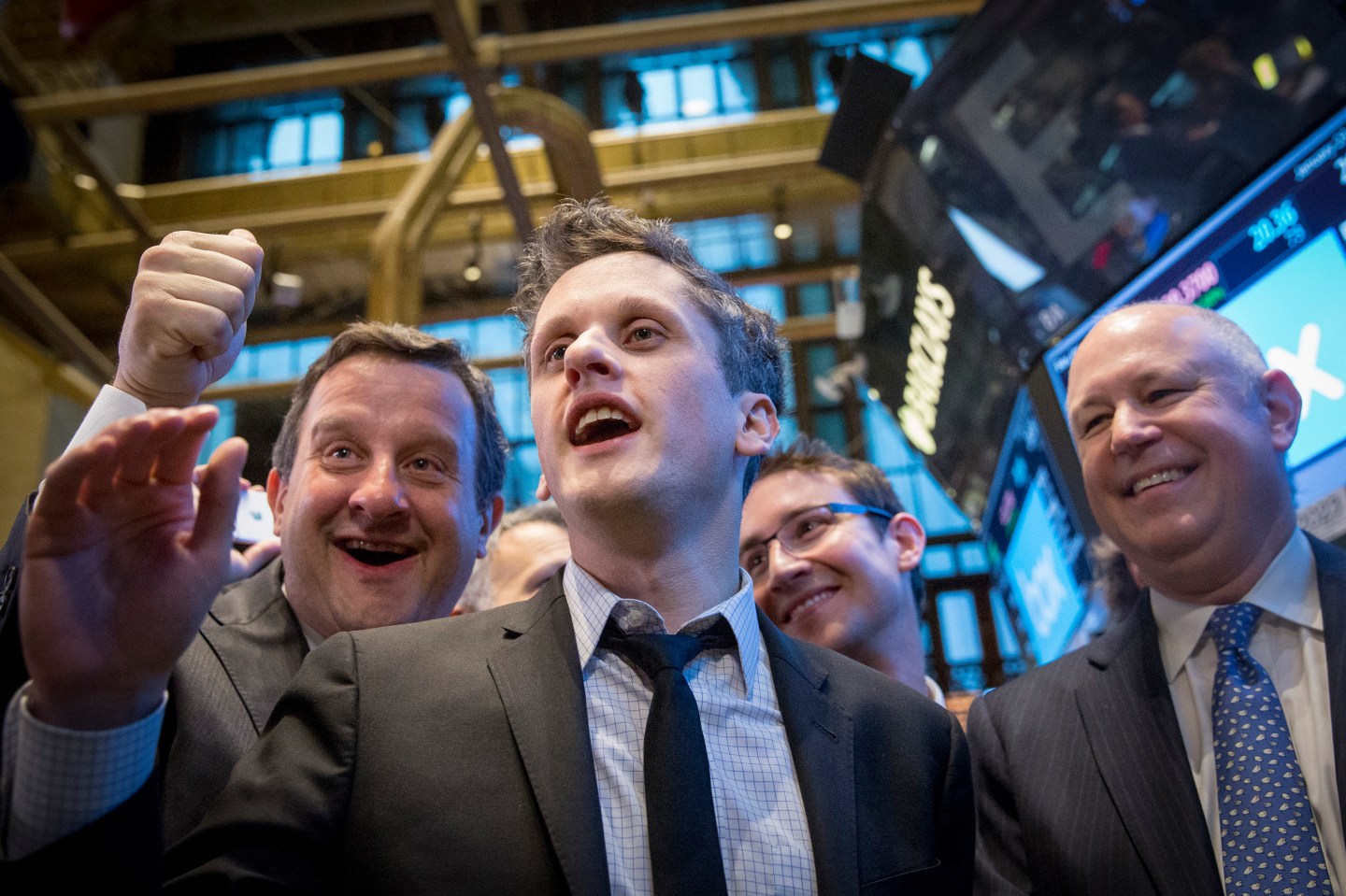 Box raised $175 million on Friday in the first initial public offering of 2015 by a hot technology startup. Despite significant losses on the business software company’s income statement, investors were happy to welcome it. Shares of the Los Altos, Calif. company (BOX) surged as much as 76% on its first day of trading.

Does this presage a blockbuster year for tech IPOs? In recent years investors saw two of the biggest IPOs ever: Facebook’s (FB) $16 billion offering in 2012 and Alibaba’s (BABA) $22 billion deal in 2014. The market has yet to lose major momentum. Will that continue?

The answer is “maybe.” There are a number of household names in the tech industry that observers expect (or hope) to soon list on U.S. exchanges, allowing consumers to have a chance to own a piece of the companies they help support. Among them: Uber, Airbnb, Dropbox, Pinterest, and Snapchat. (See each company’s valuation on Fortune‘s first-ever Unicorn List, updated quarterly.)

But these startups have shown a willingness to stay private as long as possible. Many were thought to be prime IPO candidates in 2014. Most raised hundreds of millions of dollars in private markets this past year, buying them more time before they would have to face the public scrutiny and earnings circus that a public offering would entail. A few, such as Uber and Snapchat, raised huge rounds in the waning days of 2014, making a 2015 IPO less likely or even necessary.

Take Uber, for example. As much as individual investors would love to see an Uber IPO, the transportation company’s regulation-averse CEO, Travis Kalanick, may not feel the same way. Uber’s recent investment round left the company valued at $41 billion, though some expect it could be worth more than $100 billion should it make an offering this year. But that prospect is looking unlikely. Uber’s international expansion is sure to face speed bumps as governments threaten, sue, or ban the service in many cities. Any setbacks can add volatility to public stocks; the company may prefer to remain private while it fights these regulatory battles. The ongoing, high-profile controversies involving Uber drivers could also weigh on the company’s shares in the public market.

Airbnb is facing similar issues as it expands. Its business model clashes with current laws and the interests of the hotel industry. Airbnb raised $475 million in April, bringing its total private financing to about $800 million. The real estate rental company, recently valued at $13 billion, may be a more likely IPO candidate than Uber. But it could be generating enough cash to remain private.

Timing IPOs used to be easier. For decades, there was a rule that companies with more than 500 shareholders had to file for a public offering. The JOBS Act of 2012 raised that figure to 2,000, giving companies the chance to stay private longer. Google and Facebook weren’t looking forward to going public at the time that they did, but the 500-shareholder rule forced their hands. Now companies can stay private with more shareholders and find access in private markets to the kinds of institutional investors who would be first in line during an IPO. Second and third-tier companies don’t have this luxury. But there’s a risk: Once the stronger, more sought-after names finally do go public, they could find that investors’ appetite for them has diminished. The stock market may also be less bullish than it’s been in recent months.

Fifty-three tech companies went public in 2014, but only a few of the big names that investors pined for—GoPro (GPRO) and LendingClub (LC) among them— ended up listing their shares. We’re likely to see a continuation of the trend in 2015 with smaller, lesser-known enterprise technology companies. (Read: “Beyond Box: 10 big business-tech IPOs in the offing.”) This is not necessarily a bad thing. Some of the top-performing IPOs of last year in all industries were companies like Zendesk (ZEN), up 173% from its offering price, and TubeMogul (TUBE), up 197%.

But if you’re looking to own a piece of best-known, most-desired IPO candidates—especially the ones you use daily on your smartphone—you may have to wait longer. The ones that can afford to stay private likely will.

Consider the counterexamples of Box and Dropbox. Both make strong showings in the online storage business. Dropbox raised $350 million in an equity round last January and secured another $500 million in debt financing a few months later. The loans will give it a resource to draw on for a long time, leaving it plenty of gas in the tank should it choose to steer away from public markets.

Box is a different story. The company raised $150 million last July at a valuation of $2.4 billion, with the stipulation that it would go public within a year. For a time, it looked as if Box would be worth closer to $1.5 billion as it neared its IPO deadline. Rather that buy time to avoid an IPO, Box faced pressure to go public for future capital. (Its market capitalization today is $2.77 billion.)

It’s a similar story for other private tech companies—some that are as old as the consumer Web itself. First Data, an e-commerce payment processor that first went public in 1992, may stage another IPO this year. The company went private in 2007 in one of the biggest leveraged buyouts ever. It’s still holding $23 billion in debt from that deal and is looking to raise capital from an IPO to lighten its debt load. GoDaddy may be even less palatable. The domain-registration company—known for its tasteless commercials under former CEO Bob Parsons—has been itching for awhile to make a public offering, even though the terms may not be ideal for new shareholders.

Whatever the case, there are important market trends for startup CEOs to consider. Interest rates in the U.S. could start to rise later in the year, dampening demand for new stocks. Economic uncertainty in Europe and Asia, coupled with the still-to-be-felt aftershocks of plummeting oil prices, could create more fluctuation in the stock market. And then there’s the fact that IPO filings surged in the final weeks of 2014—but aside from Box, there was nary a tech star among them.

The surest IPOs this year will be the ones that need the capital most. And the rest? Well, don’t hold your breath.

Correction, January 27, 2015: An earlier version of this article incorrectly stated that First Data will hold an IPO this year. It has not formally announced plans to do so.